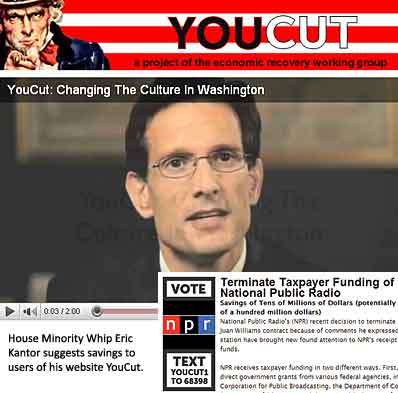 Bills to defund public broadcasting, or at least any radio network that fired Juan Williams, are beginning to seem like a real threat since the Nov. 2 midterm election gave Republicans a 60-plus majority in the House and a mandate to take huge bites out of federal spending.

Last week the co-chairmen of President Obama’s National Commission on Fiscal Responsibility and Reform — assigned to suggest ways to reduce the $13.7 trillion deficit — advised dropping CPB from the budget, along with some vastly bigger federal expenditures that have even sturdier support in Congress (separate story).

For conservative talking heads, ending aid to pubcasting would be a high-profile get-tough symbol. And for liberals, giving up CPB could be an attempt to avoid other more widely unpopular cuts.

With NPR’s new notoriety, columnist George Will wrote last week, it “became a conservative answer to the liberals’ challenge, ‘Where precisely would you begin cutting government?’”

Sen John McCain echoed the view on election night. Asked by Fox News what Congress should cut first, McCain replied: “How about let’s start with the Corporation for Public Broadcasting? How about if we have an across-the-board cut back to 2008?”

YouCut, a website promoted by House Republican Whip Eric Cantor, where citizens “vote” on various budget-cutting ideas, featured NPR as its latest proposal over the weekend.

Since the DTV transition ended, the government hasn’t showered public stations with big gains. With CPB requesting a $604 million advance appropriation for FY13, the administration is backing $460 million. (The FY12 appropriation is $445 million, and this year, FY11, the outlay is $430 million.)

APTS and its incoming president, Patrick Butler (separate story), face a Capitol Hill atmosphere reminiscent of Newt Gingrich’s heyday. When he was speaker of the House, Gingrich tried to zero-out CPB funding in 1995 and ’96.

With the federal deficit in the spotlight, pols of both parties are now looking for cuts. “There’s a huge push to reduce the deficit, and discretionary programs have been targeted,” Thompson said.

Though full committees won’t be decided until well into the new year, both of the presumed top Republican House leaders are foes of federal aid to pubcasting.

“We need to face facts,” likely Speaker John Boehner of Ohio told National Review Online on Oct. 21. “Our government is broke. . . . Given that, I think it’s reasonable to ask why Congress is spending taxpayers’ money to support a left-wing radio network.”

Rep. Eric Cantor of Virginia, the presumed next majority leader and No. 2 to Boehner, sponsored an unsuccessful bill in 2005 to uphold a 25 percent cut in CPB funding. He’s trying again this year by backing the anti-NPR campaign on his YouCut website.

In the 2005 fight, CPB opponents suffered a spectacular rout (Current, June 27, 2005), with the House ultimately reversing the budget cut 284-140 — a performance that pubcasting supporters can hope to repeat.

In the Senate, Majority Leader Harry Reid (D-Nev.) has six fewer Democrats, giving his party a majority of just 53.

Public broadcasting will say goodbye to “a number of supporters” as a result of the midterm votes, Thompson said. She calculated that 16 of the 113 members of the bipartisan Public Broadcasting Caucus are gone. Of 49 senators who signed on to support CPB appropriations requests, nine are departing; in the House, 34 of the 182 signatories are departing.

One notable midterm loss was 14-term Rep. Rick Boucher (D-Va.), defeated by Morgan Griffith of the Tea (“taxed enough already”) Party. Boucher voted to restore $400 million in CPB funding in 2005, and was a member of the Public Broadcasting Caucus.

“It’s not just that the electorate and the House swung to the right, there’s also been a huge generational change in Congress that began in 2006 with the defeat of [Alaska Republican Sen.] Ted Stevens,” said John Lawson, former APTS president and pubcasting consultant. “Lobbying is not so much an act of persuasion as it is search for champions. And the agenda item No. 1 for federal advocacy for public broadcasting is to identify new champions.”

Among the departing supporters is retiring Rep. David Obey (D-Wis.), chair of the House Appropriations Committee, a House member since 1969. Obey was instrumental in securing $25 million in fiscal stabilization funds for pubcasting stations in 2009.

Ted Stevens, the most vocal GOP fan of pubcasting in recent years, left Congress two years ago when he lost re-election and then perished in a plane crash in his home state on Aug. 9.

Stevens’s peer as a longtime backer of the field is Daniel Inouye (D-Hawaii), chair of the Senate Appropriations Committee, who was reelected for his 9th term on Nov. 2. Though the longest-serving senator wields enormous power over spending, he’s 86 years old and may be unable to beat the odds against winning a 10th term at age 92.

Like Stevens, he has emphasized support for public broadcasting in rural areas.

Thompson remains confident there’s still a “large, strong base” for pubcasting in both houses. “But the challenges are building that base with new people who don’t know us,” she said, “and re-engaging the people who are coming back.”

“Public broadcasting has solid support across the country,” said Tom Glaisyer, analyst with the Media Policy Initiative of the progressive New America Foundation think tank. “That has to be marshaled and made more visible. The system needs to make the case that public TV and radio provide a public square and encourage honest debate.”

Who would get hurt?

NPR’s Oct. 20 firing of news analyst Juan Williams (Current, Nov. 1) prompted a Tea Party leader to write a Senate bill to defund CPB, but a House bill to that effect had already been introduced in June.

The House bill to zero out CPB (H.R.5538), introduced in June by Rep. Doug Lamborn (R-Colo.), was immediately referred to the House Committee on Energy and Commerce, where it saw no action. Lamborn’s bill would ban federal funding for the corporation after fiscal year 2012. It has 19 co-sponsors, all Republicans.

The Senate bill, announced Oct. 22 by Tea Party advocate Jim DeMint (R-S.C.), a member of the Senate Commerce Committee, has yet to be filed since Congress won’t reconvene until this week, according to his staff.

NPR said the radio network itself gets 4 percent of its revenue directly from federal grants, but its angry critics in Congress are going for the whole CPB appropriation.

DeMint, citing the approximate percentage of total system funding that comes from CPB, minimizes the impact on pubcasting.

“NPR and PBS get about 15 percent of their total budget through federal funding, so these programs should be able to find a way to stand on their own,” he reasoned, using a figure that reflects federal aid to the whole system of stations. “With record debt and unemployment, there’s simply no reason to force taxpayers to subsidize liberal programming they disagree with.”

“This isn’t the first time there are calls for defunding, and it won’t be last,” said Thompson at APTS.

The Commerce Department’s Public Telecommunications Facilities Program —  the second largest budget line largely devoted to pubcasting — distributes matching grants for station equipment in most states and has been rescued by Congress year after year despite thumbs-down recommendations from both the Bush and Obama administrations.

President Obama’s budget proposal this year proposed zeroing out PTFP. APTS pushed back, and now committee bills in both the House and Senate would allot $20 million to the program for this year.

The president’s budget also consolidated Ready To Learn, an ongoing funder of PBS Kids programming, into larger education programs, without specific funding. On Oct. 15 CPB and PBS announced a $72 million grant via an RFP from the Department of Education salvaging RTL.

Thompson, Lawson and CPB Senior V.P. for Communications and Government Affairs Tim Isgitt expressed concern about the White House tendency to “consolidate pots of money” this way, as Thompson put it.

“The danger is, if President Obama and the congressional GOP leadership agree on a package of far-reaching cuts, that makes it that much harder for public broadcasting to ask for an exception,” Lawson said.

Despite pubcasting’s potentially uphill congressional battle, at least one analysis predicts that funding will indeed survive.

In a post-midterm report, “President Barack Obama and the Closely Divided 112th Congress: An Angry Electorate Has Spoken, Now What?,” analysts at the powerhouse D.C. lobbying and law firm Patton Boggs write that they do not expect federal funding for NPR or public broadcasting will be eliminated, particularly because the White House strongly opposes that. The last attempts to do so “were not successful because supporters of popular programming rallied to defend the appropriation, and we expect a similar outcome this year.”

“However,” it warns, “challenging times remain ahead. While funding for the CPB is not likely to be ended, we do believe that future appropriations for public broadcasting may be reduced from present levels, as they were in the early years of the last Republican Congress.”

Conservative direct mail king Richard Viguerie circulates petition to defund NPR. “Even under the best of circumstances,” his e-mail says, “taxpayers should NOT be paying for National “Public” Radio. But it is clear the network has no tolerance for viewpoints outside of its liberal dogmas.”

In 2004, Sen. John McCain (R-Ariz.) introduced a bill to reauthorize CPB funding [bill, Current coverage], but six years later, on election night 2010, when Fox News asked him what the new Congress should cut first, he said: “How about let’s start with the Corporation for Public Broadcasting?”