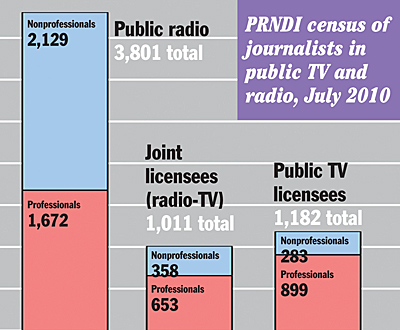 Public broadcasting has 3,224 professional journalists plus 2,770 nonprofessionals contributing to its reporting, making a total of nearly 6,000, according to a census by a team from Public Radio News Directors Inc. that was commissioned by CPB. Three-quarters appear to work in radio.

Almost 80 percent of the professionals are full-timers, according to preliminary figures.

The pros would amount to about one in six of total public broadcasting employees, based on the 20,000 total estimated for January in a CPB report.

The nonprofessionals are roughly equally split between students and volunteers, according to early figures.

PRNDI’s team, led by Michael Marcotte and including Ken Mills and Steve Martin, has submitted more detailed survey results to CPB. Ninety percent of CPB-assisted stations responded to the survey.

Survey for CPB: Have some journalists working there?

Marcotte publishes this preliminary info on his site.