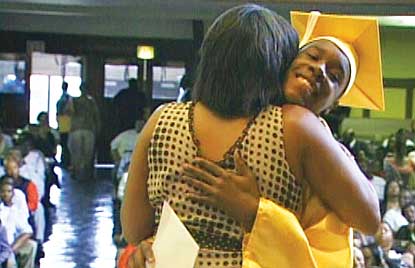 Few docs as substantial as The Principal Story, which airs on P.O.V. Sept. 15, are funded in full by a single angel, but this one was.

The Wallace Foundation didn’t choose to cover the whole cost to make independent producers’ lives easier, though the grant did that.

Wallace became sole funder on its first big media project to make sure the film would be centered on one of its major research subjects — the intense challenges facing school principals and educational leaders, according to Jessica Schwartz, senior communications officer at the foundation.

At the same time, she said, the funder avoided controlling the film so closely that it would be ineligible for PBS distribution, one of its major objectives. It was a variation on a delicate relationship that lies behind many public TV productions, which are made only because the funder cares about the subject matter but must remain under the producer’s editorial control to abide by PBS rules.

The foundation was “extremely hands-off” with The Principal Story, said Tod Lending, who made the film with David Mrazek, another experienced documentarian with many public TV credits.

“This was a gift to the filmmakers,” said Simon Kilmurry, executive director of P.O.V., who was on the panel that advised Wallace on choosing them. “They could focus on the story.”

The risk involved $1.5 million, though Lending estimates that less than half of that was spent on the P.O.V. film. The rest went to several smaller nonbroadcast films plus outreach efforts, including grants to 17 local stations. The risk also involved timing. The doc will air just weeks before a conference on educational leadership planned by Wallace in mid-October.

A doc grant of more typical size would have been $100,000 to $300,000, said Kilmurry. Many P.O.V. films take five or six years from concept to delivery, he said. The Principal Story took a little over a year and a half from RFP to broadcast.

Getting partial funding would have made the filmmakers’ job a lot harder as they tried to raise money while shooting, said Mrazek. “Either we would have been working and not getting paid, or we wouldn’t have the money for postproduction.”

The double story of two elementary-school principals that Lending and Mrazek delivered, full of tears and intense emotion, is far from the research reports on educational leadership that the $1.1 billion New York foundation has been funding for a decade.

Of the proposals that Wallace considered, others were wonkier but would have had shorter lifespans, Kilmurry said. Particular education policies change, he observes, but the pressures on schools will go on.

At a principals’ conference earlier this year, more than 1,000 principals laughed in recognition as they watched a youngster in the film throw a terrifying Grade A tantrum in Purcell’s office, recalls Judy Ravitz of Outreach Extensions, who was hired by the filmmakers to coordinate outreach for the film. Mrazek also heard from principals: “Multiple people said, ‘My God, that’s my life as a principal.’”

In a quieter scene (image below), Purcell tries magical thinking to motivate a tiny child, asking him to rub some of her hand cream on his hands. “When you feel like making a bad choice,” she said, “… just smell your hands and that will remind you of me and that I want you to make safe choices, because you’re one of my favorite kids in the whole wide world. Give me a hug. Get a pass.”

Kerry Purcell (above) urges a child to make safe choices in his life. Principals sometimes become standins for mothers, using every means to stabilize students and let the learning begin. (Screenshot from The Principal Story.)

The emotional intensity of principals’ work not only surprises ordinary viewers but also some school policymakers, the producers said. “What struck us when we heard back from Wallace, their response was, ‘Wow, we didn’t know how emotional it was going to be,” said Mrazek.

The emotion engages viewers, and the scenes become “jumping off points to talk about wonkier stuff,” he said.

Schwartz wasn’t certain the big grant was a good idea until she saw the rough cut last November. “Until I saw it, I was nervous like a cat,” she told Current. “I was an internal advocate for the project. I felt some personal as well as professional liability,” she said. “People were so moved, and the conversation was so rich that I started feeling all warm and tingly about the project.”

To manage the funder’s risk, Schwartz said, Wallace hired producers with care, beginning a two-stage process early in 2007 by inviting 16 to submit short proposals and work samples (nine responded) and then giving three semi-finalists $10,000 each to make minidocs showing their approaches.

Having an early decision on full funding gave Outreach Extensions a year to choose stations that would commit to work on the project for six months, Ravitz said. “They had the time to do really good planning. It has paid off so much . . .”

Schwartz trusted the filmmakers to find a way to connect with viewers. “A good way to engage target audiences is to inform the discussion without controlling it,” she wrote in the Communications Network blog for grantmakers this month.

What Wallace wanted most was “to show that the job has fundamentally changed from your childhood principal,” she told Current. Back then, a principal’s job was to keep the school open so teachers could teach. “That model is dead.” Now principals are a focal point for accountability, expected to turn low-performing schools around.

Attention to the role of school leaders was “the missing ingredient” for years, she told Current. If Wallace had put up a minority of the production budget, it couldn’t have expected full attention to the factor of leadership. “We had to feel the filmmakers we gave the grant to would be absolutely willing to be informed by the knowledge we have been building.”

Mrazek made it his job to read the Wallace-sponsored research, and some of its points glimmer briefly in the film, though educators would recognize them. Lending said Purcell working with her third-grade teachers as a team is an example of a principal empowering her teachers, Lending said.

Another scene displays a principal who knows how to use data: Purcell checks more than test scores. She tells one boy: “If you would come to school more often, your score would go lickety-split up.”

Some ideas from Wallace-sponsored research came up in shooting but were cut when filmmakers and funders cut the film from 90 to 60 minutes. (The team followed a third principal, at a Chicago high school, but that story will be spun off into a separate doc.)

One big point just wasn’t gettable. “The one thing you could not see was the important ways that [school] districts can support these principals,” Schwartz said. But reality got in the way. In Purcell’s case, headquarters removed her from her beloved school and offered her a promotion, but she was demoralized and quit entirely to become a trainer of educators.

The foundation bet on what Schwartz calls a “hybrid” approach. To meet PBS’s standard and give the film credibility, it didn’t want to dictate the film to a hired-gun producer. “If you’re beating your own drum,” she said, “why should anyone else care to listen to you?” But it also wanted a film squarely about its high-priority subject matter.

“Let’s say, if the filmmakers originated the idea, then we might have been much more inclined to be a partial funder.”

P.O.V.‘s site about The Principal Story.

The Wallace Foundation’s site about the film, with reports and related video clips.About the principals: Tresa Dunbar and Kerry Purcell.

The foundation, with about $1.1 billion in assets, came out of a merger of separate funds created by the founders of Reader’s Digest, DeWitt and Lila Acheson Wallace.

PBS guidelines don’t object to funders initiating a production but draw the line at detailed control. An excerpt from the network’s National Program Funding Standards and Practices:

“Though program ideas will, in most cases, be generated by program producers, public television does not prevent funders that have conceived ideas for new programs from acting as a catalyst to see their ideas realized on television. On the other hand, PBS will not accept a program where the potential funder has removed control and discretion from the producer by specifying in detail what the resulting program or series should be, or by pre-ordaining the conclusion the viewer should draw from the materials presented.”