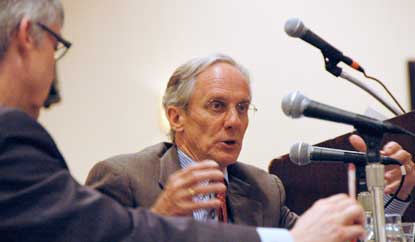 At PBS meeting in Baltimore, Bettag reports what he found in his round of interviews with public TV news producers.

At PBS meeting in Baltimore, Bettag reports what he found in his round of interviews with public TV news producers.

Tom Bettag, the former ABC Nightline and CBS News producer, says he’s “on a very fast timeline” to report to PBS by June 15 [2009] about what public TV’s separate and unequal newsgathering units could and should do by collaborating online.

After Bettag made the rounds of news execs in the NewsHour, Frontline and other public TV news units, and some in public radio, he assembled many of them May 12 during the PBS Showcase conference in Baltimore to double-check what they had told him.

He asked, “Does anybody want to step away from the table?” Bettag told Current. “The good news was that nobody pulled back at all.”

Boland said he asked Bettag and Morris to recommend how pubcasting could make its news output “greater than the sum” of what its separate units produce. “The goal,” Boland told Current, “is that our news and public affairs content would be more accessible to the audience, more coordinated and more connected.

What if someone wants to see everything about the Bernard Madoff scandal? asked program consultant Robyn DeShields during a public Showcase session May 13.

Boland replied: By presenting news in the separate online “silos” of separate programs and organizations, “we make it very difficult” to satisfy such viewers.

Fanning (above) pushed for talks about online collaboration among pubcasting news units, including radio's.

Beyond producing video reports, there is “profoundly important work” to do in connecting the news reports to supplementary material, added David Fanning, e.p. of Frontline.

“If there’s a single mover in this, it’s Fanning,” Bettag told Current, and the fact that Fanning runs Frontline strengthens his case. Fanning “has no personal reason why he should join in something like this, because Frontline is a good stand-alone and is doing just fine.” Bettag adds: “If the NewsHour and Frontline are willing to say we need to collaborate, then you’re pretty close to game, set, match.”

The elephant that’s not quite in the room is NPR. Bettag said in an interview that NPR President Vivian Schiller has seconded Fanning’s views. At the moment, however, NPR is now immersed too deeply in internal transitions to join in talks with public TV.

The big opportunity is not just a deal to share news copy online, Bettag said. But it’s not clear how far talks will go into coordinated newsgathering. And it’s “way too early” to talk about structural questions. “If I can get the people to the table,” Bettag said, “they can work that out on their own.”

Within public radio, the idea of converting its websites into an integrated source of local and national news is gaining traction, February 2009.

While one foundation backed the Bettag study, another reportedly committed $1 million for a PBS classroom project and the network sought a third big grant in arts programmming.

A parallel study on the plight of U.S. journalism: Knight Commission on the Information Needs of Communities in a Democracy

On leaving ABC’s Nightline, Bettag talked about journalism on NPR, 2005.