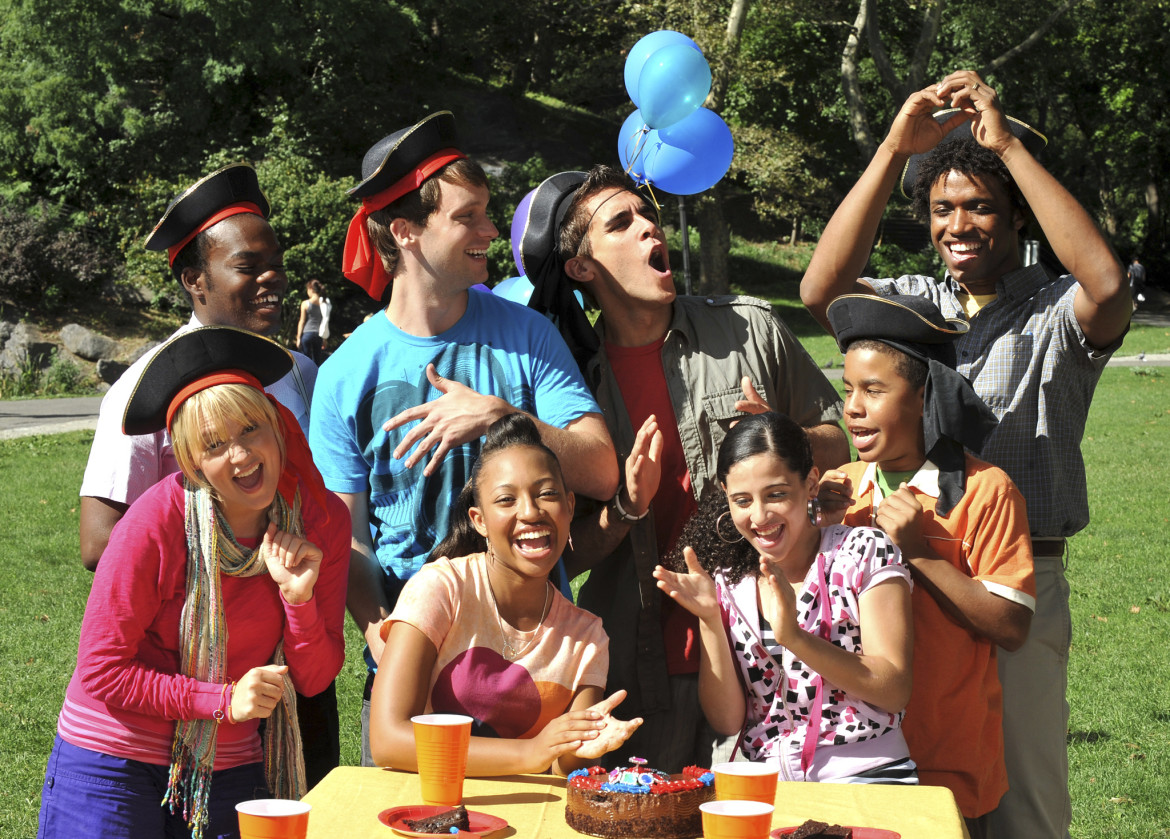 The cast of the new Electric Company. (Photo: Anthony Causi)

A new Electric Company, based on that 1970s PBS hit, premieres Jan. 19. And, yes, Paul the Gorilla is there, and the silhouettes sounding out words and all the wisecracking humor. Bill Cosby may be gone, but Whoopi Goldberg and other stars drop by.

Will today’s 6- to 9-year-olds love it as much as today’s grownups did? The U.S. Department of Education seems optimistic; it has provided nearly $6 million for the show through its Ready to Learn initiative. Like its first incarnation, the new Electric Company targets the literacy gap between low- and middle-income kids and promotes the idea that reading is “cool.”

Thirty-five episodes have been completed since production began in May, filming on New York streets and in a converted auto showroom in Newark, N.J. The show centers on four kids of diverse backgrounds who keep their neighborhood safe with their literacy superpowers. A group of troublemakers, the Pranksters, annoy and challenge them.

While the ’70s Electric Company focused on little skits and the animation of the day—limited by modern standards—the new show has cutting-edge computer graphics and huge dance numbers. The original offered simple yet silly features such as “Love of Chair,” a soap-opera satire consisting entirely of a silent boy and his chair in a small room. But the 2009 version is bright and boisterous, with its beat-box deejay, a diverse cast of kids with literacy superpowers and MTV-style pacing.

It not only aimed to teach kids to read but also won them over by skewering pop culture. Its groovy, psychedelic format drew fans of all ages. It was far out, man.

The creators of its latest incarnation are revved up. Executive Producer Karen Fowler is hoping to “create a revolution on the playgrounds of America,” where learning will be what the hip crowd does. Scott Cameron, director of education and research, says the producers aim to recreate “all the same stickiness as High School Musical or Hannah Montana — with educational content.”

They’re shooting for those goals by combining the TV show with “a 360-degree experience,” outreach including multimedia kits for teachers, a website and partnerships with such groups as the Boys and Girls Clubs of America and the Urban League.

Promotions include a bright billboard high above Times Square, right under where the ball will drop this New Year’s Eve.

All this is more than producer Samuel Y. Gibbon could have imagined. As one of the creators of the original show, he helped turn on The Electric Company in 1971, after developing Sesame Street. He won Emmys for both. When original shows ended in 1977, Gibbon was hopeful that the franchise would someday find its way back to TV.

“I was bitterly disappointed when we had to give up production,” says Gibbon from his home in Longboat Key, Fla. “PBS felt it could not support both Sesame Street and Electric Company. At that point Sesame Street was supporting itself with the sale of ancillary products — toys and such. Clearly that program could continue. The Electric Company didn’t have that product support.”

“We had always hoped it would have a longer life.”

Tools that make you drool

The demise of the show was especially discouraging as “we were just beginning to sense the possibility of computer animation,” Gibbon says. “We did the best we could with the primitive production tools we had at that time.”

He says he’s been “marginally involved” with the new show, attending a few conferences to consult on its resurrection and discuss curriculum goals. He also toured the show’s computer lab at Sesame Workshop (originally CTW) in New York.

“They’re really successful in using computer graphics beautifully with great effect, in ways we couldn’t even dream of,” he says. “That makes me drool, to think how powerful that is.”

Then, as now, literacy was the show’s driver. “It could do wonderful things for reading,” Gibbon says. “Our research results were quite remarkable.” Teachers were enthusiastic about the program, which was “a total surprise for us. We thought they might regard us as competition. Instead they clasped it to their bosoms. It helped an awful lot of kids to read. And this one could be just as important.”

The new program’s core lessons focus on vocabulary, decoding (similar to phonics), comprehension of connected text (reading sentences and paragraphs and understanding punctuation) and motivation (showing kids why reading is relevant to their lives).

What’s working for the show is the emphasis on vocabulary that already exists among young people. “There’s a lot of really juicy stuff out there that works well with the literacy theme.”

Curriculum is both embedded and overt. A narrative storyline about the kids and their literacy superpowers is interspersed with commercial-like interludes—”curriculum breaks,” as Cameron calls them, where viewers may learn a word or a reading concept. In the narrative, lessons are “so well integrated that kids won’t realize they’re learning vocabulary.”

Or, as cast member Jenni Barber says, “It’s almost like hiding the broccoli.”

She plays Lisa Heffenbacher, a “fun-loving girl, a little goofy, as comfortable skateboarding as she is in a science lab.” Heffenbacher is also obsessed with words. Her superpower enables her to quickly create and unscramble anagrams.

The goal of the show, Barber says, “is clear: It’s definitely the lesson.”

Barber has been impressed by its energy, production values — Broadway songwriters create the music, and it is filmed in HD for a big-screen movie quality — and guest stars.

Whoopi Goldberg “is really professional and cool,” she says. “A cool chick.”

Cool. Just what the producers are shooting for.

How the idea was born, spring 1970: “Paul Dooley, the head writer — a very funny actor and writer — and Dave Connell (of Children’s Television Workshop) and I went to Bermuda for a week of work in the worst weather Bermuda had ever seen to develop the format.”

The show’s title: “Early on we decided on a Second City type of repertory company, with actors who would improvise and play different roles. So we liked the notion of ‘company.’ For a while it was Easy Company, which was comfortable, but that sounded a little too military back when people were still being drafted. Around that time Marshall McLuhan was writing about ‘the electric age,’ and that seemed to emphasize the electric look we were going for. So it became The Electric Company.”

The tagline, And what about Naomi?: “Naomi Foner was my associate writer in our development year. She was brilliant. Since then she’s written screenplays and produced. She also married a director named Stephen Gyllenhaal and is the mother of [actors] Jake and Maggie Gyllenhaal.”

Paul the gorilla: “That was the idea of one of our first writers, Tom Whedon. He always had a fantasy about a comedy program in which a gorilla came in and broke things. We didn’t take it quite that far.”

1999: Reruns return on the Noggin network, a partnership of Viacom’s Nickelodeon cable network and Children’s Television Workshop. A two-hour special reintroduces the show to a new audience.

2008: Production begins on 26 episodes of a new generation of the show, to premiere in January 2009. The new Electric Company includes interactive web elements and guest stars such as Kelly Ripa (pictured) as Wednesday Jones. Coming later: content for portable media and game machines.