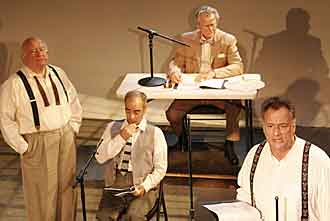 Ed Asner takes the role of Bryan, not Darrow, in LATW’s drama based on the Scopes transcript. John de Lancie, at right, plays Darrow.

Susan Loewenberg chose a radio play about the Scopes trial for L.A. Theatre Works’ 2005 national tour because it’s the one that teachers request most from the company’s catalog of more than 200 recorded plays.

The teachers seemed to be saying the evolution/creation fight is an enduring topic in our national life and not just a quirky little philosophical eruption that excuses a quick revival of The Great Tennessee Monkey Trial.

Indeed, as Ed Asner started off the tour last week as William Jennings Bryan, defender of creation, in Arcata, Calif., a new evolution trial was under way in court in Dover, Pa.

The tour swings to the Midwest next week and comes to the East in January, with James Cromwell as Clarence Darrow, advocate of evolution. The troupe returns to its home stage, L.A.’s Skirball Cultural Center, in March. Other lead performers will be Tom Bosley, Mike Farrell, Michael Learned and Sharon Gless.

LATW, a constellation of movie and TV stars, sometimes plays to a live studio audience of several hundred and reaches many more through its audio recordings and radio broadcasts. Perhaps 60,000 people will see the company on tour, compared with the 1,700 who’d attend the five studio performances that are cherry-picked for each recording.

The tour expanded at the 11th hour last week when LATW inserted a Jan. 29 stop in central Pennsylvania, where parents took the Dover Area School Board to court last month over its order that teachers shed doubt on evolution.

Public radio stations have the option of airing the performance when the company comes to town. Wisconsin Public Radio, for instance, will tape the play when it comes to Green Bay Nov. 19 and air it during its Sunday-night radio drama block on Dec. 4, says WPR Director Phil Corriveau. He says he’s interested in knowing more about airing regular plays from LATW. LATW’s website lists eight pubradio stations that carry The Play’s the Thing, including KPCC in Los Angeles, KPFA in the Bay Area, KUOW in Seattle and WGBH in Boston, and Loewenberg wishes there were more. The plays also air on XM Satellite Radio’s Sonic Theater channel.

The show on tour is not Inherit the Wind, the 1955 play and 1960 movie (Spencer Tracy v. Frederic March), Loewenberg emphasizes, but a docudrama written for LATW and the BBC in 1992 by producer and author Peter Goodchild based on records of the trial.

Goodchild’s script “plays the Scopes trial surprisingly straight” and, compared to Inherit the Wind, “is more dramatic for being true,” writes Terry Teachout, drama critic of the Wall Street Journal. Though the docudrama still “leaves no doubt as to which side enlightened minds should root for” through its narration, Teachout says, the account of the trial is far closer to the complex reality of 1925.

The tour — suggested by booking agent of Marc Baylin of Baylin Artists Management — will not only publicize LATW and its radio program but is also an excellent source of revenue, Lowenberg says. It’s a bonus that the Scopes docudrama conveys some pertinent information as well.

In addition to the 23 Monkey Trial performances, L.A. Theatre Works has 17 dates on the tour for the Neil Simon comedy The Prisoner of Second Avenue. JoBeth Williams and Hector Elizando will star for much of the run and Marsha Mason may also hit the road, though without Richard Dreyfuss, her co-star from LATW’s Grammy-nominated recording in 2000.

A Boston producer tries a weekly dollop of drama inserted in Morning Edition, 2006.

In the 2005 court case about the teaching of evolution and “intelligent design” in the Dover, Pa., public schools, U.S. District Court Judge John Jones filed this decision (PDF), December 2005. He comments on the “breathtaking inanity” of the school board’s decision.