Even on crappy old analog TV — the way nearly all of its audience will see it Nov.
9 — PBS’s premiere high-def offering is a Whitman’s Sampler of eye candy.

Made by public TV’s most experienced high-def production team, at KCTS in Seattle,
“Chihuly Over Venice” amuses your eye with color while impressing you with the
glassworking skills of Dale Chihuly’s sidemen, and introducing you to the glass master, a
mercurial Seattle character. 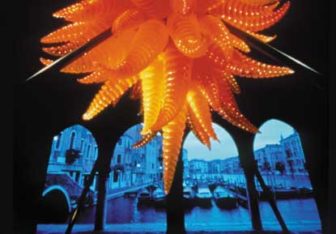 Producer/director Gary Gibson, who documented a Chihuly exhibition in 1993, returned to the artist more than two years ago to begin the station’s next big HDTV project–the first without much aerial footage, after a successful string of Over This-and-That travelogues.

The occasion was Chihuly’s ambitious plan to make a series of large chandeliers in
major glassworking regions — Seattle, Finland, Ireland, Mexico and Venice — and then hanging
the works over the canals of Venice. Wisely, Gibson doesn’t wait until the end to let us
see the outcome; throughout, he interjects scenes from Venice of the brilliantly colored
upside-down bouquets of huge green melons, blue kelp and the glowing orange abdomens of
giant insects.

HDTV is irrelevant to the human side of the documentary. Gibson had seen some
“one-sided, unreal stuff” idealizing Chihuly as an artistic genius, and set out
to show the glassmaker’s complex personality. Chihuly comes across as a curly-topped,
one-eyed, middle-aged guy with elements of childlike visionary, playful charmer and
barking taskmaster.

Gibson enjoyed showing the initially wary and eventually warm interactions between
Chihuly’s hotshot glassblowers and the older glass factory workers in Finland and Ireland
who helped make the extravagant chandeliers that end up hanging in Venice.

The project, budgeted at $518,000, was funded largely by art lovers and patrons of
Chihuly, Gibson says.

The shoot–totalling more than two months in five countries–was one of KCTS’s last
major high-def projects using cumbersome (“huge, honkin’,” says Gibson) early
HDTV gear. The analog high-def camera was tethered on a long cable to a 300-pound recorder
and a separate power supply, which the crew hauled around Venice in a motorboat, Gibson
recalls. Since completing Chihuly production, KCTS bought a compact Sony HD-Cam camcorder
that puts the whole package on a shoulder.

Mark Pingry, who shot most of KCTS’s high-def programs including “Chihuly,”
is taking a winter break after using the camcorder in a 75-day aerial shoot for “Over
Canada,” intended for broadcast around Thanksgiving 1999, according to Gibson.

The station meanwhile is shooting a natural and human history of Mt. Rainier, to be
completed in April, while editing “Over Portugal,” and planning “Over
Australia” and a history about Northwest explorer George Vancouver.

Next year PBS will air KCTS’s production of a Seattle Symphony concert with singer
Jesse Norman, shot with eight cameras, which aired on KCTS last September — the station’s
first live HDTV broadcast, which marked the opening of the city’s new downtown concert
hall.