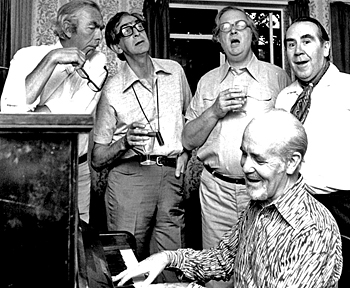 The cast of the BBC's My Music game show in full pursuit of chuckles.

Hands-up, all those who listen regularly to My Music, the half-hour radio panel game produced by the BBC and distributed by WFMT-FM in Chicago to about 60 public radio stations in the U.S.

Ah, I see a hand there in the back. It’s all right, you may remain anonymous. How many, then, have heard of its companion program, My Word!? Two more. Let the four of us leave the room to recall some favorite segments from these superb series, two of the most civilized radio programs on the air today.

I pose the questions and make the assertion at this time because the most important figure on both shows, Frank Muir, died in his sleep on Jan. 2. He was 77. Many regarded him as one of the funniest writers and broadcasters of our time, the man who invented the situation comedy, later introducing the precursors of the American series, All in the Family and Sanford and Son. During a five-year period of administrative assignments — first as assistant head of light entertainment at the BBC, then head of light entertainment at London Weekend Television — he recruited two extraordinary talents from Cambridge University, John Cleese and Graham Chapman who created Monty Python, and set in motion a train of “Britcoms” that continues to supply laughs to public TV stations throughout the U.S.

Denis Norden, a lifelong friend of Muir, who appears with him on all the My Word! and My Music programs, says that Muir “was a complete man of comedy who had a civilized breadth of allusion extending well beyond football players and bodily functions.” Norden and Muir were teamed to write material for the comedian Jimmy Edwards in 1947. Their first success was a prototype sitcom, The Glums, about a slightly lunatic family with a boisterous father and a son whose IQ was substantially lower than his temperature. The program ran for 12 years, Muir and Norden collaborating on 300 scripts. Their writing partnership was dissolved by mutual consent in 1964, the two men fearing they were settling into a too-comfortable groove. “The relationship had all the mental disadvantages of a marriage,” recalled Norden, “with none of the physical advantages.”

Prior to all this, both Muir and Norden had served in the British Royal Air Force. Muir was assigned to a photography unit, but because there were so few cameras he said he spent much of his time writing plays. When he was posted to Iceland, he became a part-time broadcaster on the military radio station there. Reassigned to Manchester to take photos of parachute training, he made 11 jumps before being injured by falling on a knife and fork in his trouser pocket.

During his career, Muir created an astonishing number of radio and TV programs as well as books of humor, some for children, some for adults, and made regular appearances on many game and panel shows, most notably Call My Bluff. The work of which he was perhaps proudest was The Oxford Book of Humorous Prose, which he finally saw published after 25 years of editing — a huge and remarkably erudite collection of comic writing, from Dickens to Garrison Keillor. His memoirs, A Kentish Lad, published in 1997, have been a great success.

It was, however, My Word! beginning in 1957, that seemed the perfect vehicle for Muir’s unique talents. These combined the prodigious memory of an autodidact — a steel trap recall of anecdotes, songs, all forms of literature and historical events — with the articulation of a born raconteur.

In My Word! two teams are asked to define words and supply the origins of phrases. Early in each program, Muir and Norden are given a line of prose or poetry and are expected to come up with an explanation of how the quotes originated. Each then concocts an outrageous but nearly plausible story, ending with some punning version of the original phrase. Thus a line from John Bunyan’s Pilgrim’s Progress — “So he passed over and the trumpets sounded for him on the other side” becomes “So he passed Dover and the strumpets undid for him on the other side.”

Puns and word play were a Muir specialty. But to describe Muir as a good punster would be like representing Noel Coward as a good piano player. His seemingly casual manipulations of language sometimes resemble Fred Astaire’s practiced improvisations.

The stories from My Word! were eventually collected and published. But on the page they seem diminished, lacking his droll delivery, the lisping r’s that he affected and the comedic timing. On TV the effects were exaggerated by his six-foot-six height, and his rather eccentric appearance in tweeds and pink bow tie.

My Music, created in 1967, is a panel game in which Steve Race, the host, quizzes two teams. Here Muir and Norden are on opposing teams. The questions relate to jazz, rock and roll, opera, the classics, screen and ballet music, a broad array of musical interests. Race, who devises the questions, sometimes illustrates snatches of music from the BBC’s vast archive and by playing the piano. Time is reserved at the end of each program for “party songs.” Each participant sings something well-known: a short aria, folk song, or music hall number (Muir’s favorite). It is corny in the unembarrassed, affectionate way that some highly sophisticated people can be. (Both programs seem to have retained some of the charm of Victorian parlor games.)

Everyone on My Music obviously enjoys himself and the others’ company. The mood is infectious. It conspires to persuade you that you, too, might fit right in, that you might even possess an encyclopedic knowledge of music and prove to be endlessly inventive like Muir and the others. It is the kind of misconception known to steal over good amateur tennis players after a day of watching professional matches at Wimbledon.

Part of the show’s success lies in the choice of music to be identified. The questions are not that difficult, but the answers are just beyond one’s grasp. The music is familiar but not fully remembered. It is maddening and hilarious. When Race plays his piano medleys, six snippets to be identified from a range that might include songs from “Madame Butterfly” and “Call Me Madam,” the teams can usually name four or five and frequently all six. I can sometimes put a title to one or two. But somehow they are all there in my head; I know them but … that’s the show’s magic.

Much of Muir’s ephemeral charm and the delight of these programs, depends upon nuances of voice inflection and timing, qualities more greatly appreciated by the ear than the eye. I once saw an episode of My Music on television in London and hated it. It was not my music.

A lot of programs in the style of My Music and My Word! can still be found on British radio, although these two are no longer being produced and have been in reruns for nearly a decade. (Martin Goldsmith, now host of NPR’s Performance Today brought them to the U.S. in 1975.) WFMT says it has no plans, thankfully, to discontinue their distribution to a potential audience of about 60 million.

All the same, reviewing the appreciations of Muir after his death, I thought I detected a subtle cultural shift in the public response to these programs. A faint but ominous note, for example, was sounded from deep within the last paragraph of the London Telegraph‘s Muir obituary: “His offer to read extracts from [his memoirs] on Radio 4 was rebuffed, and marked the end of a broadcasting career whose style was now outmoded.”

I understand but prefer not to accept the implications of this. As Frank Muir might have said of my reaction, “Denial is not just a river in Egypt.”

One thought on “Funny and civilized Frank Muir: patron of Pythons and radio games”