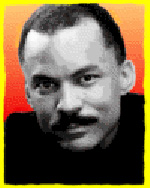 In many ways, Orlando Bagwell’s work announced his arrival as a notable creative talent years ago, when he and a handful of mostly inexperienced, young producers collaborated with Henry Hampton on Eyes on the Prize, the civil rights series that made television history in 1987.

The opportunity to work as a member of Hampton’s team “changed my whole life,” Bagwell recalled. A young father who made his living primarily as a cameraman for public broadcasting stations and producers, Bagwell had come to believe that path would take him through life — until Hampton offered him the chance to produce and direct his own films on the civil rights movement.

Now, less than a decade after Eyes premiered, the 43-year-old producer’s credits include some of the most important films dealing with African-American history and culture that have aired on public television — most recently, “Frederick Douglass — When the Lion Wrote History” and “Malcolm X — Make It Plain.”

Bagwell finds himself at another crossroads, seeking and embracing new challenges so that he will continue to find gratification in his work. Having learned his craft in historical documentaries, Bagwell is stepping into performing arts programs, a form he explored as a producer/director for WNET’s Dancing miniseries.

In his experience, each film “challenges you and pushes you in another direction, and each one influences the next,” Bagwell explained. He now looks for projects that will help him “move in a different direction.”

“I don’t think that as a painter I would want to paint the same picture over and over again,” he added. “I don’t find the same gratification out of that sort of repetition.”

He has two performance projects in the works — a film that follows playwright Augustus Wilson through the development of a play, and a biography of Alvin Ailey that incorporates a dance tribute to the choreographer developed especially for film. With both, Bagwell intends to explore new approaches to biography.

He’s also preparing to tackle another filmically difficult topic — early African-American history — in a six-hour series coproduced by WGBH, Boston, and his company, ROJA Productions. The project, originally planned several years ago for American Experience, is now “close to getting its final big piece of funding in.” For the first time, he will be at the helm of a national series production team.

For that project, he also hopes to break new ground by venturing into the big gap that separates drama and documentary, searching for ways to bring life to segments of a series that reaches back to pre-colonial times.

“I find early history filmmaking very challenging and ground-breaking in what we kind of define as documentary form.”

Through the years, Bagwell has built his reputation as a thoughtful craftsman with a rare passion and energy for his work, who tackles difficult subjects head-on and finds creative ways to make them compelling on screen.

For the first Eyes on the Prize series, he produced “Mississippi: Is This America?” and “Ain’t Scared of Your Jails,” and, more recently, he was supervising producer for Blackside’s Great Depression.

“He is constantly struggling to get to his own understanding of the roots of a story,” said Judy Crichton, executive producer of American Experience. “He will fight with himself and with others over a nuance or a subtlety, to get as close to what he feels is an accurate reflection of the story.”

Bagwell is an “intuitive filmmaker” who “resists ordinary storytelling,” said Steve Fayer, a writer who worked with him on Eyes, “Malcolm X,” and “Frederick Douglass.”

“He feels the real truth in history is an emotional, visceral understanding of the subject,” he added, and “stubbornly resists . . . pressure” to present linear, chronological stories.

Bell around the neck

“Roots of Resistance” is an excellent example of the power of nuance in Bagwell’s filmmaking. Using impressionistic film techniques that combine music with contemporary footage and archival materials, the film begins by traveling far back into the early history of the South to evoke the horrendous conditions of slavery and document African-Americans’ first rebellions against their oppressors.

In a mesmerizing segment about a runaway slave who was unable to leave the swamps because a bell collar was shackled around his neck, Bagwell mixed footage of swamp lands with an eerie soundtrack of a human voice imitating the animal noises that would have been heard there, building tension to a climax when the slave, represented only by the collar that thwarted his escape to freedom, is found hanging from a tree, the tinkling bells on his collar warding off birds of prey from feeding on his corpse.

To Bagwell, “Roots of Resistance,” which aired in 1990, was a landmark film in his career. “I felt like we had made a film out of nothing,” he said. “I think it was a pivotal moment in terms of my confidence as a filmmaker.”

His most difficult film was the 1994 biography of Malcolm X, which will be rebroadcast on American Experience in February. “I don’t think I’m ever going to confront something as challenging as that,” he said.

Fayer recalled how the production team “worked a long time trying to find a way into that story” with a long, narrated opening about “who Malcolm was and what he meant.” That approach didn’t work, and finally, Bagwell “locked himself up with his editor for a week.”

When he emerged, Bagwell showed the team what became “the first act” of the film. “I was absolutely stunned,” Fayer said. “He had found a way into that film . . . that was Malcolm’s own voice and Malcolm’s own constituency, instead of having we-the-filmmakers intruding at the beginning and telling the audience what to think. I really thought it was inspired.”