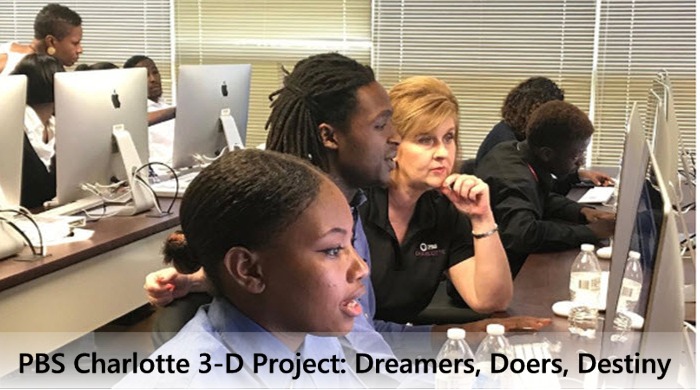 The full campaign was broken into three parts:

Content includes 32 (eight per year) five-minute features in our award-winning signature series, “Carolina Impact”, promos spotlighting successful people who have risen from poverty, four town halls (one per year), and one documentary.

Tracks Charlotte-Mecklenburg School (CMS) students in their pursuit of education completion from a six-week certificate up to an associate’s degree, leading into the first two years of their professional careers/continual education.

Administers production skills to students at five target high schools (30 students per school) via a six-week curriculum throughout the academic year. Through engaging television production projects, students will gain competency in several subject areas. They will also gain exposure to industry-driven fields, specifically 13 in-demand technical careers, to increase their industry knowledge and employability.

The team engaged students in self-exploratory, interactive lessons that included writings about motivation and dreams, like Dr. Martin Luther King Jr.’s “I Have A Dream” speech. Through intentional activities, guided instruction, and free discussion, students explored the “dream” process in-depth, asking themselves what their dreams are, how their dreams will help others, why their dreams are worth achieving, and more. Students were also encouraged to explore career pathways through a series of videos focused on high-demand industry fields.

After working with PBS Charlotte producers to craft and hone their own speeches, the cohort was trained in public speaking and on-camera skills to help prepare them for delivering their speeches at the television studio. They learned how to overcome fear, speak with confidence, master powerful body language, eliminate speech anxiety, improve their storytelling ability, and translate impact.

During the fourth week of instruction, students visited the PBS Charlotte station for an extensive tour and to film their speeches. They were also trained on the studio camera, as well as in teleprompter operations and reading.

In a single year, there were 129 3-D project graduates.

The campaign participates in the Corporation for Public Broadcasting’s American Graduate initiative, joining other stations and partners in local communities across the U.S. addressing the high school dropout rate.

Read Current’s story about this project.