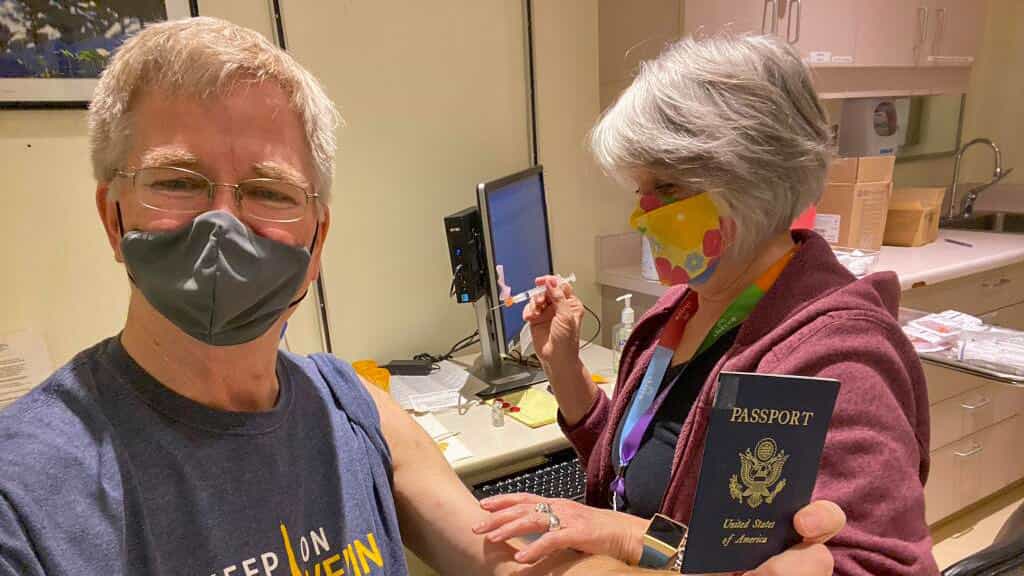 Rick Steves receives his first dose of the COVID vaccine.

As American travelers emboldened by COVID vaccines begin planning more trips farther from home, plenty of public media travel experts are eagerly standing by to give them a helping hand.

“There’s just such a pent-up passion for travel,” travel show host Rick Steves told Current. “I know that when something stops international travel for a while, the demand does not dissipate, it just backs up. Then when the coast is clear, everybody comes out, and they want to make up for lost time and enjoy their travels.”

Steves aims to speak to that audience with Rick Steves Europe Awaits, a two-hour pledge special debuting Monday that features clips of him visiting some of his favorite areas across the continent.

Samantha Brown is also shooting episodes for season five of American Public Television’s Samantha Brown’s Places to Love, in which she finds little-known spots and haunts where people are creating brand-new travel experiences, while Jeff Aiello, who hosts APT’s Outside Beyond the Lens, began filming his second season in August.

“I knew people were going to be hungry for travel content,” said Aiello. “Not just to plan their next vacations, but to just live vicariously through.”

Only a small crew works on Aiello’s adventure-travel show, which looks at how photographers capture images of the world’s most beautiful parks and nature. So he realized that they would be able to film some episodes while leaving only a small footprint. At first, they focused on the West Coast, primarily California, and then moved on to Nevada and Colorado before focusing on the explosion of people who bought RVs during COVID.

“We quickly decided to base season two on the theme of the great American road trip and celebrate what we all went through together,” said Aiello, who added that his team is still editing the last two installments of the 10-episode season.

Due to flight restrictions, Steves and his crew were unable to film in Europe for his special. Instead, over the last few months, they looked at all the places they visited recently for his hit series Rick Steves Europe, also distributed by APT, and picked out six locations that Steves said are “good for the soul, a little more thoughtful, and will help people reacquaint themselves with Europe.”

He explores Sicily, which Steves said is a “culture of carnival” and “Italy in the extreme”; the quaint Cotswold villages of south-central England; the Greek island of Mykonos; the rural countryside of Tuscany; folk life in remote Romania; and Portugal’s second-largest city, Porto.

While these might not be the most popular destinations in each of their countries, Steves said that quieter spots will appeal more to travelers seeking to avoid crowds.

“Instead of Munich, why don’t you try Hamburg? Instead of Edinburgh, take a look at Glasgow. Instead of Dublin, do Belfast. Don’t neglect the second cities of countries,” said Steves. “That’s where the action is. There’s all sorts of creative excitement going on there. That’s why we travel. I’m really thankful to be able to share that with people who are dreaming about traveling.”

Brown said that because people have been unable to travel for so long, they will be much more grateful once they’re finally able to do so.

“They are going to be more aware and more appreciative to be able to experience new cultures and experiences,” she said. “And that’s a great thing not only for the traveler but also for the local people and communities they visit.”

Travel hosts were much less enthusiastic in February 2020 as COVID was tightening its grip on the world. Christine Van Blokland, the host of APT’s Curious Traveler With Christine Van Blokland, in which she explores the hidden histories and mysteries of countries, first noticed the growing problem when everyone in the Frankfurt airport was suddenly wearing a mask.

“We had no idea what this was about to turn into,” said Van Blokland. “No one did.”

Within days, her plan to shoot season five episodes in Poland, Switzerland, Hungary and France were put on hold. “The only good news, if there was any good news in 2020, was that season four had just started airing in early 2020, so viewers still saw a fresh season,” she said.

When Brown originally emailed her crew to cancel filming in March 2020, she said they hoped to be back in production in June. “It just seemed impossible that it would last even that long,” said Brown.

Even now, with shooting back underway and episodes filmed in Asheville, N.C., and New York’s Western Finger Lakes, Brown said the pandemic has completely altered the process. The show’s budget has been hit hard because more vehicles are required to transport the crew, while funding also had to cover COVID testing and personal protective equipment.

“One of the biggest changes when we resumed was that we would allocate 2-3 hours for a conversation to really get comfortable with people on camera,” Brown wrote in an email. “With COVID we kept it to a limited number of questions when unmasked.”

“For filming we did everything we could to be outside so we could be at a somewhat normal distance apart,” Brown added. “The few times we did film inside without masks the person I was talking to and I would keep masks on until we were rolling and we were filmed 12 feet apart! We also filmed a lot of the interior shots with me asking questions to camera while they had their masks on and then their answers when I had my mask on.”

Meanwhile, Mickela Mallozzi, who since 2014 has trekked across the globe exploring dance in different countries for APT’s Bare Feet With Mickela Mallozzi, quickly pivoted to social media. Starting in April 2020, she conducted weekly dance sessions live on Facebook, YouTube and Instagram, coinciding with the release of her show’s third season. New episodes of Bare Feet were getting impressive ratings compared to previous seasons.

“I thought, ‘Okay, how can we keep this idea of traveling the world, virtually, and still connect with people through dance and music?’” Mallozzi said. “So I connected with a different dancer from around the world every week. We made it interactive, so it was just the two of us on screen and I was the student, just like my TV show.”

Over this period, Mallozzi learned the likes of step-dancing, flamenco and samba from residents of Ireland, Spain and Brazil, respectively. Each Facebook and YouTube video drew from 1,000 to 7,000 views, while an interview with Rick Steves and an Irish Traditional dance session received 30,000 and 40,000 views, respectively.

“There were a lot of new fans that didn’t realize we were a TV show,” she said. “They thought we were just this live series.”

Mallozzi said that she was particularly happy because her classes allowed people to “feel like they were still traveling” while also getting them up and moving rather than sitting all day.

After briefly considering shooting new episodes of Curious Traveler, Van Blokland also started to connect with fans online by hosting virtual tours on her social media accounts. In conjunction with various National Tourism offices, she gave online tours of Innsbruck and Salzburg’s historic Christmas markets in Austria, the medieval and ancient streets of Lyon in France, and Windsor Castle, Bath and Bristol in Great Britain.

‘A beautiful way to connect with the world’

Though these hosts have started to turn their attention to getting back on the road, they anticipate that it will still take some time for travel to return to pre-pandemic norms. Van Blokland said that people will continue to wear masks, especially on airplanes, for quite a while to come, and travelers shouldn’t try to sneak around quarantine rules.

“When planning your travels, think outdoor activities, or limit your indoor activities. I am a big museum geek, but for now, I’m focusing more on outdoor than indoor sights,” she said. “I also hope small group walking tours become even more popular. With an educated guide, this is my absolute favorite way to experience a new destination. And open-top double-decker buses. I know they’re cheesy, but I love them.”

Steves said he’s hopeful that places will really start to open up in the next few months, but he predicts that travelers might need a vaccination passport to enter Europe.

“I would expect late this year, certainly early next year, we’ll be back up and running,” Steves said. “The day will come in the near future when it will be very straightforward to travel again. Until then, public television is a beautiful way to connect with the world. That’s why I’m so thankful to have my gig with public television, because, like travel, it celebrates the diversity on this planet and helps us get to know our neighbors.”

While Aiello is still focused on the current season of Outside Beyond the Lens and Steves is waiting a few months before crossing the Atlantic, Brown, Van Blokland and Mallozzi have already planned new episodes.

Brown is shooting next in New Jersey, Colorado, and Louisville, Ky., and hopes that her crew will be able to film internationally in the fall as long as it’s safe to do so.

Production on Curious Traveler is scheduled for late summer, with Van Blokland aiming to hit a new location every three weeks, including Estonia, Croatia, Ecuador, Poland, Switzerland and Greece.

Mallozzi is going to stay much closer to home for the 12 new episodes of Bare Feet, as she will spend June through September exploring dance in the five boroughs of New York City, with a planned air date of April 2022.

Though she covered the city for the show’s second season, this time she will focus on the recovery of New York after COVID, particularly through the lens of arts and small businesses.

“The mission of our show from day one has always been, let’s connect with people around the world through dance and music. During COVID, I saw how important it was for people to not just be educated or entertained but feel good while watching Bare Feet,” said Mallozzi. “Since New York was the hardest city to be hit by COVID in the USA, this is the comeback story that we all need to hear. We need to share positive stories of our communities and what can be achieved with diversity in the arts.”

Correction: An earlier version of this article incorrectly stated that Rick Steves’ new travel special features “bloopers, games, messages about the importance of public television, and insights into how to travel safely.” These elements are part of a separate pledge premium.