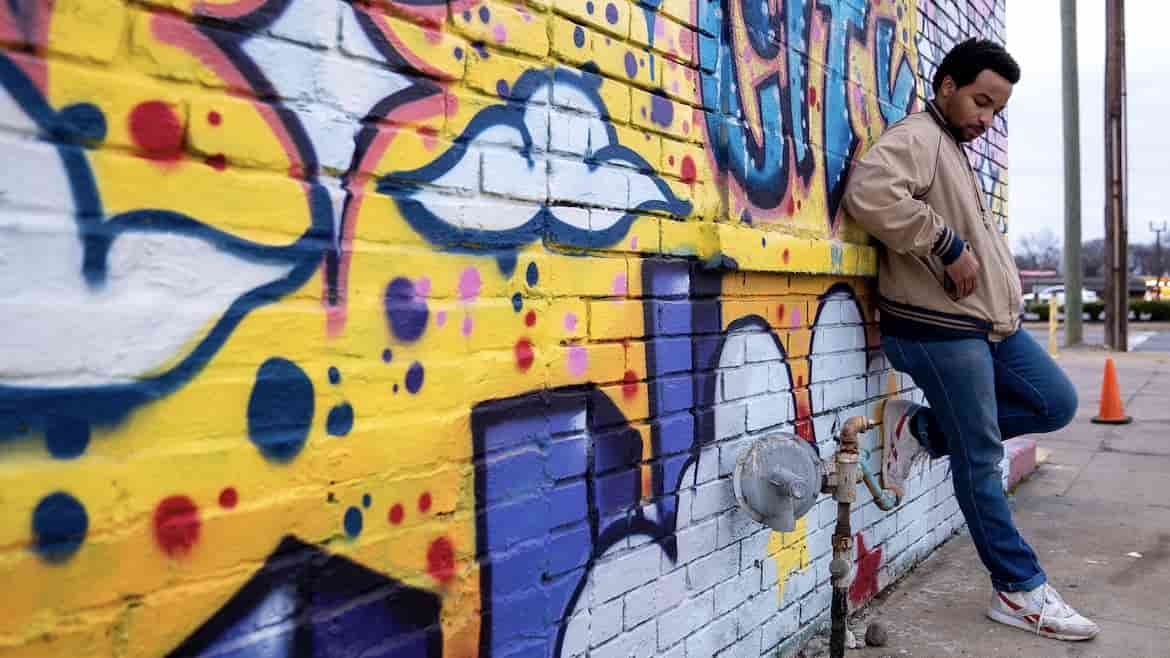 The short film "Missing Magic" follows a young poet and activist from Birmingham, Ala.

Six short films that premiered at the AFI Docs Film Festival last week are the culmination of a new initiative to connect Black, Indigenous and people of color filmmakers living in the American South and U.S. Territories with public media stations.

The Hindsight Project aimed to support BIPOC filmmakers in developing relationships with PBS stations while telling community-focused stories. The initiative is a collaboration among Firelight Media, which focuses on producing documentary films and supporting emerging filmmakers of color; Reel South, a documentary series supported by Southern PBS stations; and the Center for Asian American Media, a member of the CPB-funded National Multicultural Alliance.

“The Hindsight Project is a way for us to bring filmmakers to a station and bring a station to the filmmaker,” said Nick Price, series producer with Reel South, during a panel discussion hosted Wednesday by AFI Docs. “And it’s also allowed us to diversify the people and the perspectives that stations and Reel South are bringing to a national audience.”

The project connected filmmakers with Arkansas PBS, PBS North Carolina, Alabama Public Television, Louisiana Public Broadcasting and South Florida PBS in Miami throughout the process of creating eight- to 15-minute short films about their communities’ experiences during 2020 and 2021.

When Firelight developed the collaboration behind Hindsight, it was building on its Groundwork Regional Lab, a program supporting early-career filmmakers in the South, Midwest and U.S. territories that launched in 2017. “As things evolved and 2020 began, we realized that it was really important to have these voices in our landscape,” said Chloë Walters-Wallace, Firelight’s artist programs manager.

During the pandemic, national media coverage about the South focused on racial inequality and health disparities worsened by COVID, “but not from a local perspective and not in an intimate way that Hindsight has provided,” she said.

Hindsight models a way to involve public media stations with independent films and their creators earlier in the production process, helping to build relationships and open lines of communication, said Sapana Sakya, talent developer and special projects manager for CAAM.

CAAM funds film projects in development or early production and usually reaches out to stations or national PBS series that may be interested in airing the film once the project is already completed, Sakya said.

“With Hindsight, what we tried to do was start that process of working with stations from the very beginning,” she said.

Each station received $7,000 from CAAM for supporting filmmakers and providing in-kind resources, such as postproduction services or marketing graphics, for the project as a whole. CAAM received the funding for Hindsight from the Wyncote Foundation. (Wyncote is also a funder of Current.)

“We struggle with trying to increase the representation of voices that we bring to our audience,” Chris Holmes, VP of production and digital studios at Alabama Public Television, said during the AFI panel. “It becomes difficult sometimes to really be able to fund projects that are not being produced actively by the team here. … With Reel South and funding already being in place, it made it a real easy lift for us.”

The Hindsight films include a broad range of stories, such as a Black New Orleans resident going through a COVID vaccine trial and a Pakistani student immigrating to Arkansas for school only to find classes fully virtual.

The films will be released digitally starting July 29, with one film coming out each week on World Channel’s YouTube channel. They will also be available on PBS.org, the PBS app and Reel South’s website. A three-part series that presents the films for public TV broadcasts will be distributed by PBS Plus in November.

Firelight Media developed the project with primary support from CPB and Wyncote. In addition to providing grants of up to $20,000 to each filmmaker, the initiative includes a mentorship program in which Firelight connected the filmmakers with industry veterans. Filmmakers were asked to describe their needs and to provide a shortlist of people they would like to work with, said Walters-Wallace.

Kiyoko McCrae, director of the Hindsight film We Stay in the House, said that mentorship from director Bing Liu gave her confidence “to follow my own instincts.”

Liu “was really committed,” said McCrae, whose film focused on the experiences of New Orleans mothers parenting during the pandemic. “It was really helpful to have him at every step of the way.”

Throughout the process, the Hindsight cohort also was invited to attend curated workshops on topics such as creative online marketing, legal advice on producer-director relationships and amplifying films’ social impact.

“Particularly during a pandemic, it was definitely really helpful to have the support of the organizations not just to help us stay on track, but also to do the UCLA Law Clinic class or the marketing workshop and just all these things,” said Dilsey Davis, who directed Now Let Us Sing about her interfaith, interracial choir in Durham, N.C. “I’ve been working in the industry for a long time. But the public media space is different. And how do you learn about that unless you’re given these kinds of opportunities?”

Supporting filmmakers also made it easier for stations to work with new creators, Sakya said.

“It gave them sort of an added incentive to bring those folks in, knowing that they had the scaffolding of our strengths as media arts organizations that support filmmakers with mentorship or with workshops and all these other wraparound services,” she said. “It sort of took away some of that risk in working with a filmmaker that had never worked for public media before.”

Firelight’s work on the Groundwork Regional Lab shaped its approach for creating the Hindsight collaboration.

“The Groundwork Lab supports filmmakers of color outside of the poles of New York and L.A. to create a pipeline for those filmmakers,” Walters-Wallace said. It also aims “to raise the profile of those filmmakers so that the rest of the industry can recognize the importance of local storytellers.”

“That work is kind of the foundation for what led to Hindsight,” she added.

CAAM had also launched an initiative in 2017 to research the growing Asian American population in Southern states and build a network of Asian American filmmakers in the South.

“Especially in the South, where it is such a Black and white conversation or dialogue, oftentimes Asian American stories are not able to find a place,” Sakya said. “By being in this space, we would be able to integrate some of the Asian American stories so that we have a more authentic representation of some of the diversity that exists in the South.”

CAAM had worked with Reel South on a convening of Asian American Southern filmmakers as part of this initiative. CAAM, Reel South and Firelight had collaborated in smaller ways, such as referring filmmakers to each other. The organizations began planning Hindsight in July 2020.

“The Hindsight Project really became about partnering with these organizations that we had developed a relationship with over several years to finally create this one project,” Price said. “It allowed us to be nimble, to do something that was relevant and important and needed in the public media system, but also feature all of our missions around uplifting diverse voices, uplifting Southern voices.”

The three organizations, as well as Reel South’s network of stations, invited select filmmakers to apply for the grant. Price said they received around 20 submissions.

In evaluating the submissions, Sakya, Walters-Wallace and Price considered the filmmaker’s vision for the story, level of experience in the documentary space and familiarity with public media stations, Price said.

“We didn’t want filmmakers who had major, major experience in public media,” he said. “We wanted it to be filmmakers who could accomplish this, which is a very tight turnaround … but also filmmakers that would benefit from being spotlighted in this way with such a unique project.”

The filmmakers’ connections to their communities were also a major consideration in choosing the Hindsight participants, Walters-Wallace said.  “We were looking at how accountable they were to the community that they wanted to work with. We wanted filmmakers who were really going to be treating the communities they’re filming about with respect.”

The six filmmakers selected for Hindsight were notified at the end of October and began receiving their first round of production funds in December, according to Price. Their deadlines to submit rough cuts were as early as February.

Initially, Price said, they had hoped to release the films along with Reel South’s annual broadcast series, which came out in April. After realizing a summer release would be more feasible, they were able to partner with AFI Docs for the premiere.

“We did want to give these filmmakers and these films the sort of prestigious festival opportunity that every documentary filmmaker sees value in and which still proves valuable in building an audience and building the anticipation around the release,” Price said.

Hindsight’s next steps may depend in part on the reaction to the release of the first six films.

“My hope is that once the films are out and there’s kind of buzz around it, that there will be further support provided to do something like this again,” Walters-Wallace said.

She sees the project as a model for future collaborations in other regions, particularly in places where Firelight has already made inroads.

“Because we serve the U.S. territories and the Midwest through Groundwork, I have no intention of leaving those filmmakers behind,” she said. “I would love to be able to go to the filmmakers we’ve already served and say, ‘Hey, here’s some money. What do you want to say about your region?’”

This article has been updated to more accurately reflect how Firelight Media developed and initiated the project, the roles of the three partner organizations, criteria for selecting the filmmakers and plans for creating similar partnerships for other regions.

Correction: An earlier version of this article provided the incorrect amount for the funds CAAM gave to stations. Each station received $7,000, not $7,500.