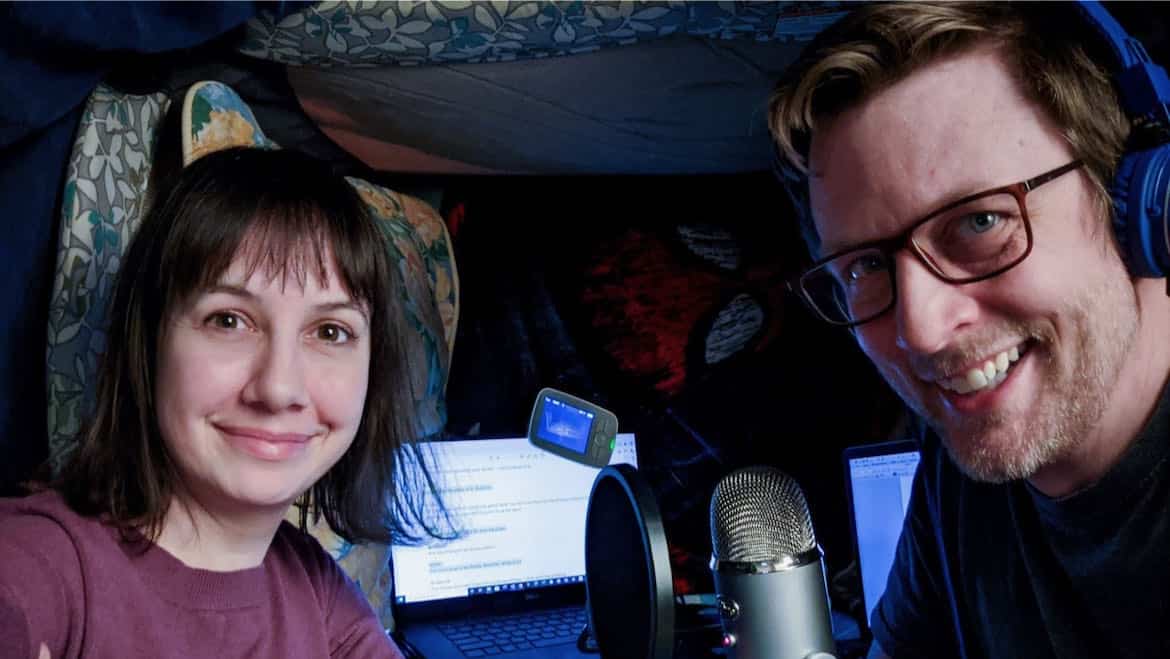 Creating an audio drama was new territory for the Kansas City Actors Theatre.

When the pandemic brought an end to in-person performances, some theaters began streaming productions online. To the Theatre’s artistic chair, John Rensenhouse, that felt “a bit like fitting a square peg into a round hole, because it’s not live theater,” he said.

But he recognized that the “theater of the ear, as it were, is something that could be fully realized in a pandemic situation.”

Historically, audio dramas dwindled in popularity when television arrived on the scene. But as the pandemic keeps people home and theaters closed, Kansas City Actors Theatre is one of several theaters that has taken to a local radio station to ensure that the shows still go on.

The ‘happy accident’ of radio theater

At the beginning of the pandemic, Rensenhouse asked Valerie Andruss, a volunteer with KKFI in Kansas City, Mo., to consider broadcasting radio plays by the Kansas City Actors Theatre.

“KKFI’s mission has to do with serving underserved populations and airing things that nobody else airs,” Andruss said. “Nobody else was doing radio plays, and I loved Kansas City Actors Theatre. It just seemed to be a great fit.”

By lucky coincidence, a spot in KKFI’s schedule opened up when an arts program went off the air. Kansas City Actors Radio Theatre’s 30-minute episodes now air Fridays at noon. “That was the fastest show I think we’ve ever gotten on the air,” Andruss said.

The Theatre’s portfolio includes vintage comedies and suspense dramas from the 1930s through the ’50s. The Theatre also performed a 12-episode original show about Kansas City during its Jazz Age and the Great Depression by local writer and actor Forrest Attaway.

Attaway hadn’t written the entire series of Kansas City: 1924 when the Theatre started producing its radio show. Rensenhouse said that the group would perform Kansas City: 1924 in three-episode runs with two to four vintage episodes in between to give Attaway a chance to write installments.

Kansas City Actors Theatre recorded the vintage plays using Zencastr, a web-based podcast recording application. Actors were invited to join the Zencastr recording at specific times from their own homes. Some are recording under blankets hung over clothing racks. The group sent multiple takes of scenes to a University of Missouri-Kansas City sound-design graduate student for editing and adding sound effects.

When recording Kansas City: 1924, the professional sound designer on the project wanted more control over sound quality. The group first recorded the show over Zoom. Actors then went to the sound designer’s home studio to record parts individually, listening to the Zoom recording and delivering lines when cued.

Before Andruss got permission to put Kansas City Actors Theatre on the radio, she asked whether the group would stop producing dramas when the pandemic ended. Rensenhouse said that was not the plan. He hopes that in the late fall the group will be able to record episodes in front of a live audience.

“It’s been a happy accident that we were kind of forced into this, but we’ve really enjoyed doing it,” he said.

A panel of community leaders nominated the Kansas City Actors Theatre for a 2021 Philanthropy Award through Nonprofit Connect, an organization that empowers nonprofits in Kansas City. The Theatre was nominated in the organization’s “Pivoting Pioneer” category for its quick turn to audio plays. Winners will be announced May 12, based on crowdsourced voting.

Episodes of KCART will return May 14, including new original works and a game show featuring Kansas City artists and actors.

‘One of my favorite nights in the theater’

Elliott Forrest, a host on New York Public Radio’s WQXR, wanted to reintroduce radio dramas to NYPR’s portfolio before the pandemic started. He had previously directed six productions of A Christmas Carol for NYPR from 2010–15.

He got approval from NYPR leadership to explore the genre pre-pandemic. His first stop was The Public Theater, “thinking that we could partner with them to provide an audio platform for their existing theater projects,” he said. He zeroed in on the Theater’s free Shakespeare in the Park, which became the focus of the partnership once the pandemic started.

“How could the Public Theater go 58 years with Shakespeare in the Park and then miss one in Central Park for a year?” Forrest said. “So we put it on the radio.”

Last summer, NYPR and The Public worked together to produce an audio version of Richard II in place of an in-person Shakespeare in the Park performance. The station mailed every performer a recorder and mic stand.

“They became their own engineer and their own recording person,” Forrest said. “They were all trained on how to record themselves and upload.”

Recording yielded approximately 17,000 individual audio files that were mixed to create the four-part serialized broadcast. It aired on WNYC 93.9 FM and AM 820 in July and can now be heard on WNYC’s website.

NYPR and The Public teamed up again in March for Romeo y Julieta, a podcast of Alfredo Michel Modenessi’s bilingual adaptation of the Shakespearean tragedy. The podcast launched March 18.

The Public was responsible for the recording of Romeo y Julieta. NYPR was a distribution and platform partner for the project, according to WQXR CCO Ed Yim. Forrest also served as a creative consultant to The Public to ensure that the product worked for audio platforms.

Forrest said that while WNYC Studios is NYPR’s podcast label, it took people throughout NYPR to make Romeo y Julieta happen. WNYC did promotional stories. WQXR featured Shakespeare-related classical music all day March 18, and NYPR’s The Greene Space premiered the podcast the night of the 18th during a free three-hour livestreamed event. Led by Rebeca Ibarra, host of WNYC’s Consider This, the virtual launch included a pre-show greeting and cocktail demonstration, a presentation of the podcast, and a post-show discussion and Q&A.

Creating Richard II and Romeo y Julieta has demonstrated to NYPR that “there’s an audience for this,” Forrest said. (The station declined to share podcast download data.) After the launch of Romeo y Julieta, an audience member at The Greene Space virtual event told Forrest, “This was one of my favorite nights in the theater, and I wasn’t even in the theater.”

“Now that this partnership is established, and now that we have seen how we can do this, I think this window has opened,” Yim said. “Even as organizations return to live performance, we will need to find ways to keep this as part of what we do.”

A shared dream of audio dramas

Though Boston’s Huntington Theater Company doesn’t focus on audio dramas, it has produced them before. Charles Haugland, Huntington’s director of new works, said the company chose to pivot to audio dramas during the pandemic because it had in-house sound and production expertise.

At the beginning of the pandemic, Haugland said, he and other Huntington staffers wanted to adapt a new play that hadn’t been performed before for their self-produced podcast. Playwrights had told Hungtington that they were sad that works they had written for the stage would first be experienced digitally.

“So we got interested in, ‘What would be a play from the Huntington’s history that we’d love to share with new audiences, with more audiences?’” Haugland said.

Haugland and other Huntington staffers chose to adapt Tiger Style!, a comedy about race, parenting and success that was a hit at Huntington during its run in 2016.

In an email to Current, Haugland said that Huntington shares a lot of supporters and audience members in common with Boston’s public radio stations.

“We knew GBH would be an incredible partner, due to their longtime and deep support for the arts in Boston,” Haugland wrote. Huntington and GBH had collaborated in April 2020 to present a TV and livestream broadcast of Mala, a one-woman drama written and performed by local playwright and performer Melinda Lopez. The effort was a “great success for both organizations in elevating beautiful art to a wide audience,” Haugland said.

So when Haugland considered partners for an audio version of Tiger Style!, “it was our dream to work with GBH on it, and we are grateful it became their dream, too,” he said.

Playwright Mike Lew, who wrote Tiger Style!, was interested in transforming it into both a podcast and a potential broadcast, Haugland said. Huntington commissioned Lew to adapt Tiger Style! alongside the play’s original director. Haugland approached Pam Johnston, GBH’s GM of local news, and explained his vision.

“Everyone’s hungry for connectivity as well as arts and entertainment and a way to experience that despite our limitations in the midst of this pandemic,” Johnston said. “So I began a series of conversations with the team over at the Huntington, and it was an immediate share of enthusiasm and excitement for what we could do with this project.”

Four actors from Huntington’s 2016 performance of Tiger Style! returned for the project, as well as an actor who had performed in the show at the La Hoya Playhouse in San Diego. The theater mailed equipment to actors via FedEx. Most of the actors recorded their parts in closets.

Because the performers had worked together before, performing in a new medium was easier. “I think it ended up, in retrospect, being a great thing to have a group of people who had worked together in person and had that dynamic and that experience to draw on,” Haugland said.

Johnston said that GBH’s engineers and technicians listened to the show to provide feedback and make it broadcast-ready. GBH also regulated the show’s language and ensured it adhered to FCC guidelines.

“What began with blue-sky conversions morphed into a plan that helped to support the local arts in creative and innovative ways,” Johnston said in an email to Current. “Tiger Style! was a wonderful partnership and leveraged our potential to think creatively about new partnerships and to help elevate locally produced arts and culture content across our platforms.”