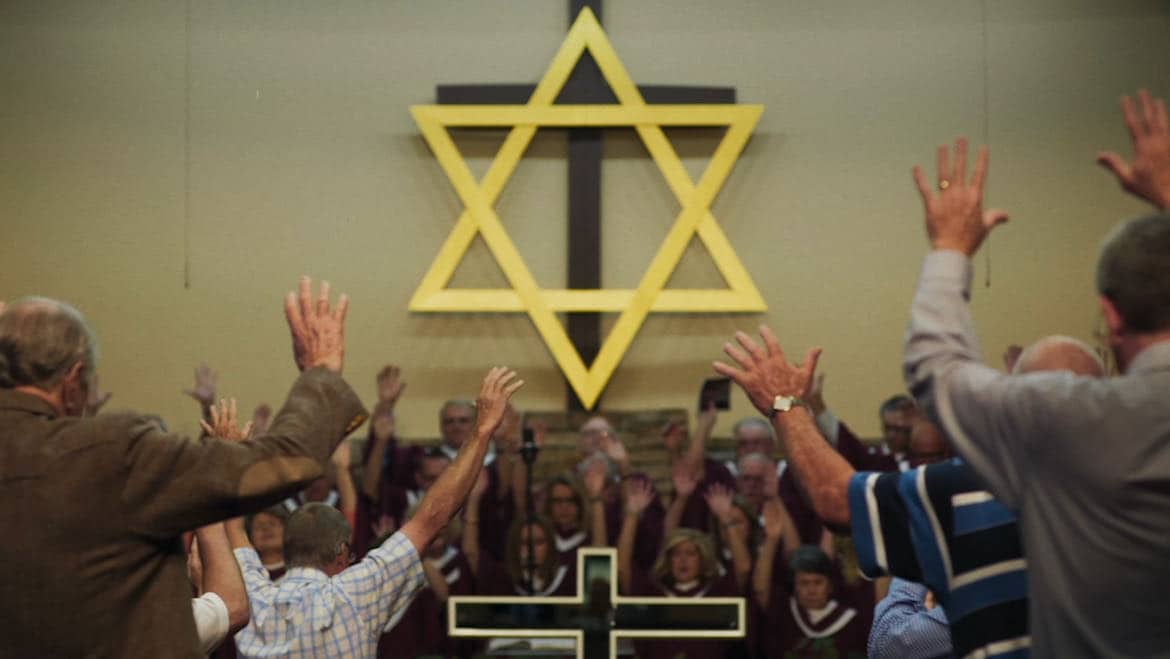 In a scene from "'Til Kingdom Come," congregants worship during a service in Middlesboro, Ky.

PBS and the Independent Television Service have postponed a scheduled broadcast of ’Til Kingdom Come, a documentary about American Evangelical Christians and the state of Israel, pending an independent editorial review.

The 2020 documentary was scheduled to air on PBS stations March 29 to coincide with Passover. But ITVS, which produces Independent Lens, said on Twitter Monday that the broadcast had been postponed.

A PBS spokesperson told Current that an independent review of the documentary “is being conducted to ensure that the film meets PBS’ editorial standards.” PBS and Independent Lens decided “in consultation” to launch the review, according to the spokesperson.

The decision follows scrutiny of the film by the Committee for Accuracy in Middle East Reporting in America, a media watchdog organization. In a March 19 article, CAMERA Christian Media Analyst Dexter Van Zile wrote that ’Til Kingdom Come inaccurately quoted remarks made by former President Donald Trump during a January 2020 press conference with Israeli Prime Minister Benjamin Netanyahu.

In the film, Trump is heard saying, “The United States will recognize Israeli sovereignty over the territory that my vision provides to be part of the state of Israel, including the West Bank described so vividly in the Bible.” Trump is shown speaking before the camera cuts to conference attendees when he says “vision.” Viewers then see a close-up of Trump as he begins saying “… the West Bank.”

In a Washington Post YouTube video of the conference, Trump can be seen saying, “The United States will recognize Israeli sovereignty over the territory that my vision provides to be part of the state of Israel.” About 14 minutes later, Trump says, “There are many Muslims who never visited Al-Aqsa [Mosque] and many Christians and Jews who never visited the holy sites in the West Bank described so vividly in the Bible.”

CAMERA noted that Trump said “including” in another part of the speech.

Van Zile credited Luke Moon, deputy director for the Philos Project,  with flagging the quote as fake. The Philos Project’s website says that the organization promotes “positive Christian engagement in the Near East.”

CAMERA said that it contacted PBS about the Trump quote and that it had been told March 25 that the quote had been corrected.

Available for rental through independent theaters, ’Til Kingdom Come focuses on the “unlikely alliance between America’s Evangelical Christians and the State of Israel,” according to a website promoting the program, and “reveals the power and peril of wielding prophecy as a political tool.”

The documentary’s director, Maya Zinshtein, previously directed the 2016 film Forever Pure, which aired on Independent Lens in 2017. Publicists for ‘Til Kingdom Come did not respond to requests for comment.

William Boyd Bingham IV, a pastor in Middlesboro, Ky., is featured in the film alongside his father, who is also a pastor. Bingham explains that he instructs his congregation to donate to Israel because of a biblical promise that God will bless those who bless Jews.

Yael Eckstein, CEO of the International Fellowship of Christians and Jews, is shown leading interfaith charity projects. Others from the Israeli settler movement discuss their alignment with evangelicals to push for favorable U.S. foreign policy in regards to land neighboring Palestinian territory.