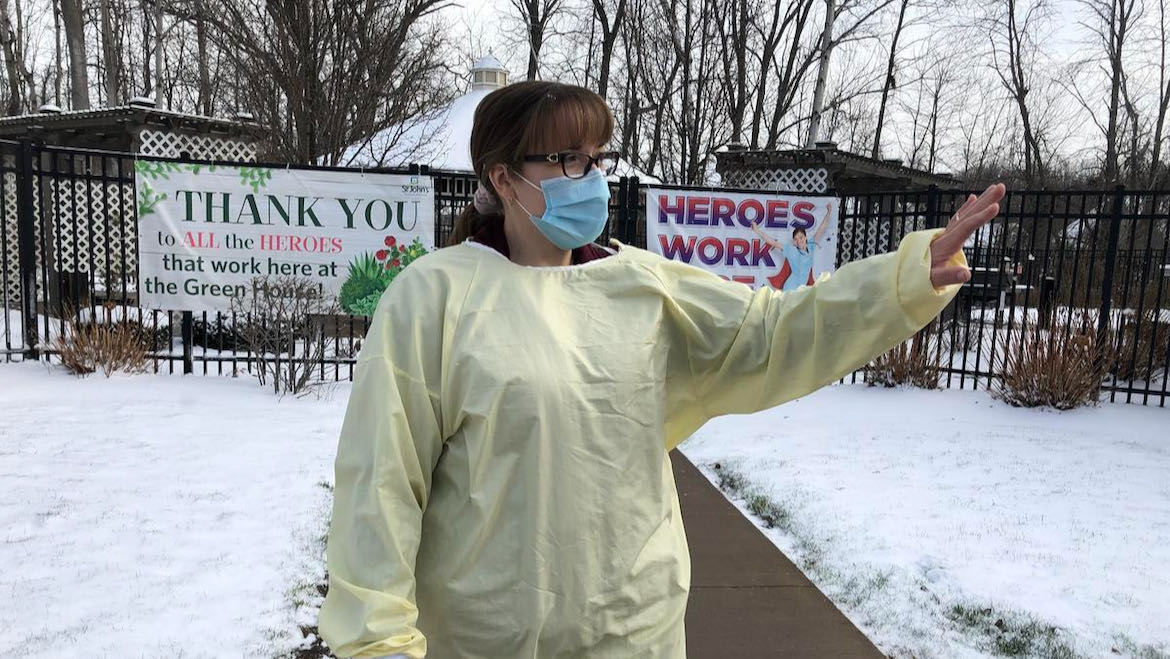 Polly Boland, a nurse leader guide at a Green House nursing home in Fairport, N.Y., speaks with WXXI outside the home.

Karen Magnuson, who leads the project at SJN, said the project was conceived when the Ralph C. Wilson, Jr. Foundation, which funds community-improvement initiatives in western New York and southeast Michigan, approached SJN about raising awareness around caregiving issues. With the support of the foundation, she conducted a pilot program in 2019 at The Democrat and Chronicle in Rochester, N.Y., guiding journalists through caregiving coverage.

After a successful run at the Gannett-owned newspaper, Magnuson expanded the collaborative to include 12 other New York newsrooms, launching “Invisible Army: Caregivers on the Front Lines” in May 2020. The series is dedicated to exploring the challenges of being a family or professional caregiver, many of which have been exacerbated by the pandemic.

“One of the key learnings in the pilot was that caregivers are a tough audience to find because many caregivers, especially those that are unpaid … don’t really identify themselves as caregivers,” Magnuson said. “We learned during the pilot that caregivers themselves are sort of an invisible army, and that’s one of the reasons why our series came to be called ‘Invisible Army: Caregivers on the Front Lines.’”

The Ralph C. Wilson, Jr. Foundation agreed to fund the collaborative, made up of print, radio and television newsrooms, for two years by providing each of the two regions with $70,000 per year, she added.

‘Getting more than you have to give’

Tom Dinki, a reporter at WBFO in Buffalo, N.Y., is the latest journalist to publish content for the collaborative. In late February, he published a two-part series about a small nursing home project that kept coronavirus case numbers low throughout the pandemic. His first article introduced readers to the project and how it functioned during the pandemic. The second explored whether this solution to caregiving was sustainable in other parts of the country.

To complete the two-part series, Dinki partnered with a reporter from WXXI in Rochester, who conducted in-person interviews for him. Most organizations partner with another newsroom to co-report and produce content for the collaborative, he said.

“It’s tough to dedicate time to a long-term project when you’re also trying to cover daily news,” he said. “Them being so close to the [nursing] home in Rochester, it just made sense for them to do the reporting on that since it was kind of already in their own backyard. … It cut down on travel.”

With a background in print journalism, Dinki adapted his radio script for the series into two written articles for publication on WBFO’s website. He said the series was well-received by community organizations in Buffalo and Rochester; a local assemblywoman even expressed interest in the solution when Dinki interviewed her for an unrelated article about nursing-home legislation.

In January, 16 southeast Michigan newsrooms joined the collaborative, which previously consisted of just 13 New York organizations. Vincent Duffy, news director at Michigan Radio, said that he was especially excited about the potential of gaining access to content from other organizations.

“At Michigan Radio, we’re always looking for opportunities where … the partnership results in getting more than you have to give,” Duffy said. He added that it’s the station’s goal to air one piece a quarter for the collaborative and to regularly republish work from other members.

Tracy Samilton, an energy and transportation reporter for the station, is currently producing a three-part series that will air in mid-April, Duffy said. The first part will feature a one-on-one discussion between a radio host and Samilton to introduce the audience to the institutional challenges of caregiving like low pay, lack of benefits and high turnover rates. That two-way will precede two feature stories, the first of which will examine the benefits of caregiver unions in Oregon. The second feature will examine how corporate opposition has prevented Michigan from adopting a similar program in the past.

Funding and the future

According to Magnuson, the $70,000 in funding for each region from the Ralph C. Wilson, Jr. Foundation is intended for project-related costs that are outside of a newsroom’s typical annual budget, such as travel or freelance assistance. Each organization that wishes to use funding must pitch a story and its estimated expenses during a meeting with members of the collaborative. All 26 organizations then vote on whether to fund the project.

While Michigan Radio hasn’t required funding for its current caregiving project, other public media members of the collaborative have applied for and received funding. Detroit Public Television, which joined the project as one of the 16 southeast Michigan newsrooms, recently hired an independent contractor to produce a piece about respite programs for caregivers.

Daphne Hughes, who produces American Black Journal on DPTV, was contacted by leaders at the television station about profiling a Detroit center that encourages caregivers to take a break by offering adult day care services at a low cost.

Hughes said that in the process of covering the center, she learned that one of the biggest challenges for caregivers is finding opportunities for self-care and that inexpensive programs that allow caregivers to take a break are essential.

Martin Fischhoff, director of communications at DPTV, said that the station’s investments in community engagement led to a tip about the story.

“We like to call ourselves the engagement station,” Fischhoff said. “We try to really get to know the community. We try to build partnerships and find leaders in the community that can open doors with us and build trust so the people know that we’re not just here one time.”

When DPTV joined the collaborative, Fischhoff said, it contacted community leaders in Detroit who in turn connected it with organizations focused on issues related to old age. One of those organizations, Universal Dementia Caregivers, informed DPTV about the respite care program.

Hughes’ piece will air April 15 on One Detroit, a weekly public affairs show. A reporter from Urban Aging News, DPTV’s local partner in the collaborative, will publish a written article on the same subject.

Magnuson hopes to build a sustainable growth plan that will allow the collaborative to last beyond its first two years and expand to include newsrooms from all of New York and Michigan.

“I think it’s really important for collaboratives of this nature to continue to shore up the media ecosystem, because if you develop really strong relationships through a project of this nature, then those relationships are there and you might be able to help each other out on a variety of other things, especially during these challenging times when some newsrooms are downsizing,” she said.