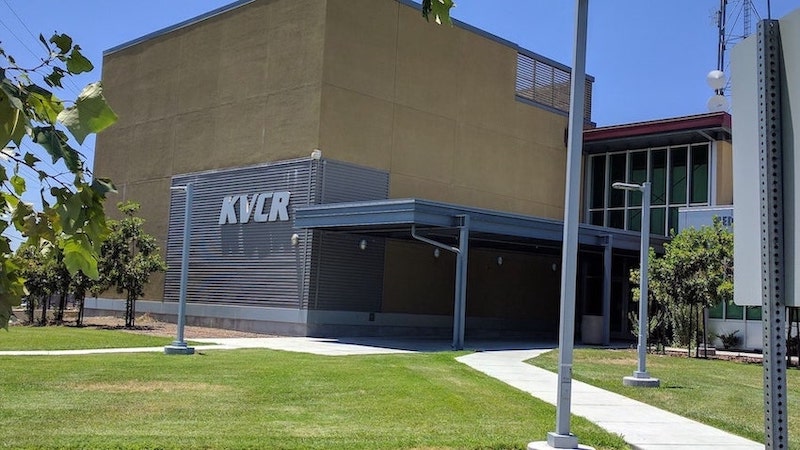 The licensee for California’s KVCR is considering a plan to reduce NPR and PBS programming on the joint licensee’s stations and to transfer the trademark and license for First Nations Experience, a nationally distributed television channel for Native American and Indigenous programming.

The board for the San Bernardino Community College District released a report Friday recommending that the board transfer KVCR’s facility and equipment to San Bernardino Valley College’s Institute of Media Arts by June 2023. The station is located on the college’s campus.

The transfer would lead to an expanded curriculum of television and audio production courses for students, according to the report.

The report, which was shared Monday at a board retreat, said the transition plan “will not result in a loss of access to NPR and PBS in our community.” The report points out that the surrounding community will continue to have access to NPR programming through KPCC in Pasadena, Calif., and PBS programming through PBS SoCal and KCET in Los Angeles.

“Best of all, as this plan is implemented, the region will gain access to content newly created by our SBCCD students and community,” the report said. The report did not specify the kinds of content students might produce for KVCR but said that the station would reduce its use of NPR and PBS content as students create programs.

The school district cited KVCR’s financial losses as one reason for dropping public media programming. It said the station has lost $10 million in the past six years and that the licensee used its endowment and loans to cover expenses. The report added that the station is projected to lose another $8.7 million over the next five years.

SBCCD emphasized that it wants to align KVCR with its mission to serve students. According to the report, the typical student served by the district is “a 25 year old Latinx female from San Bernardino” who is “a high school graduate with no college degree that receives financial aid. She is a part-time, continuing student, taking classes during the day with a dream to obtain her BA after completing her AA.”

In February, SBCCD distributed a survey to students, KVCR donors, school employees, educators and community members that garnered 1,383 completed responses. The respondents who were community members, KVCR donors and SBCCD employees were more likely than students to be white and at least 50 years old, the report said.

“KVCR is serving a different population demographic from that of a typical SBCCD/SBVC student,” the report said.

The licensee also recommended transferring FNX to its founding partner, the San Manuel Band of Mission Indians. A spokesperson for San Manuel did not respond to requests for comment.

The report did not say whether such changes would affect the station’s staff, but Interim Chancellor Jose Torres has previously said that reducing PBS and NPR programming could lead to job cuts and layoffs.

The recommendations are expected to be presented at an April 8 board meeting for potential approval.

Torres and the board first discussed transfer plans in September. Former and current employees spoke out against the plan, saying that the district needed to do more research before it came to a final decision. The suggestion to cut ties with FNX has also prompted concerns from the community, viewers and station leaders who support FNX’s programming.