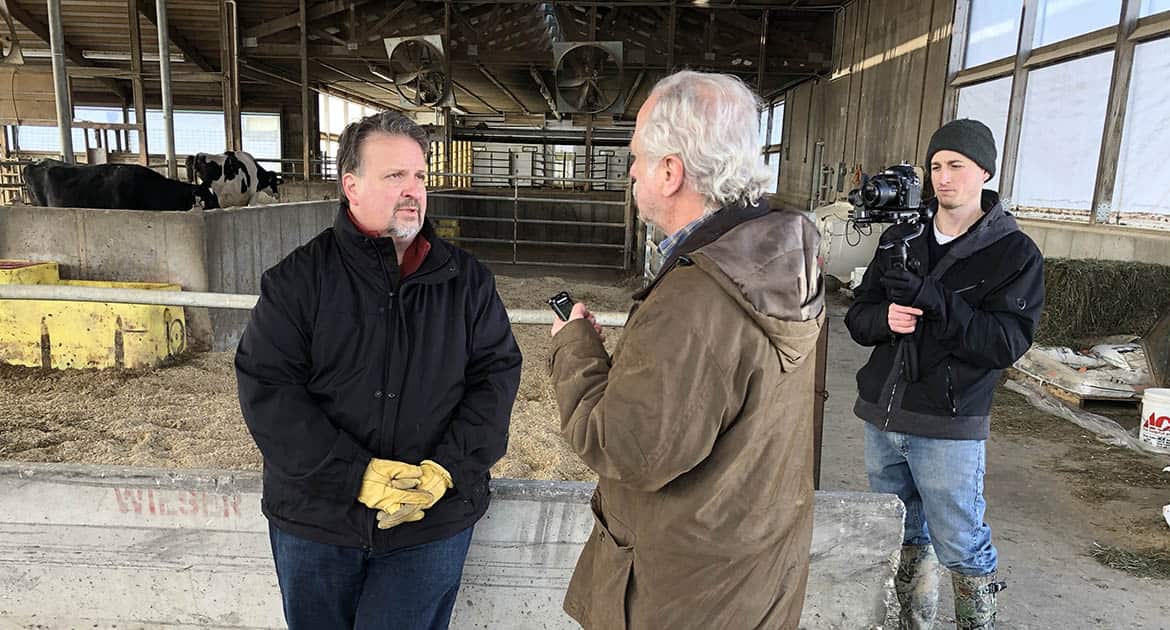 A Milwaukee PBS collaboration supported by Frontline combined the strengths of broadcast and print journalism to produce a two-episode documentary about Wisconsin’s changing rural economy.

The station completed the first iteration of Frontline’s yearlong local journalism initiative in late January. The initiative provides four to five newsrooms with $75,000 and various other forms of support each year in an effort to strengthen local journalism and highlight undercovered stories on a national scale.

Among the stations participating in the inaugural round, Milwaukee PBS was unique in that it collaborated with another news outlet on its project. Producers from 10thirtysix, Milwaukee PBS’ newsmagazine, adapted a multimedia series by the Milwaukee Journal Sentinel to documentary format. The newspaper’s “Dairyland in Distress” series ran throughout 2019.

Frontline special projects editor Philip Bennett, who assists newsrooms selected for the initiative, called the collaboration a “force multiplier” that allowed him to focus on refining the existing narrative rather than building an investigation from scratch, as he did with the other four grantees.

According to Journal Sentinel business reporter Rick Barrett, who narrated and reported for the documentary, collaborations between the Wisconsin paper and TV station are common. The organizations previously partnered on a documentary about teen mental health, which won a regional Emmy award.

“Between the two of us, I think we bring a lot of different skill sets to the table,” said Barrett. “But at the end of the day, we’re focused on the same thing.”

Barrett first covered the dairy industry in Wisconsin in the early 2000s and served as a primary reporter for the “Dairyland in Distress” series. His familiarity with the topic and connections in Wisconsin towns helped the 10thirtysix team develop a course of action from the Journal Sentinel’s reporting.

Roughly a quarter of the way through the project, the COVID-19 pandemic struck and “threw a wrench into everything,” Milwaukee PBS producer Scottie Lee Meyers said.

Much of the content captured by the documentary team was left on the cutting room floor as they were faced with new logistical and narrative obstacles. Originally, the crew planned to capture the essence of rural dairy Wisconsin at county fairs, fall festivals and town halls. Those plans dissipated as COVID-19 sent everyone into lockdown and prompted cancellation of most public events.

Frontline editors encouraged the team to pivot and capture how the virus was affecting small towns in the state.

“The first thing we did at Frontline was go back to our funders and get additional money to help support our partners’ coverage of COVID,” Bennett said. “Then we co-published that coverage.”

To avoid further disruption of the project’s momentum, the 10thirtysix team chose to rely on Barrett, Journal Sentinel photojournalist Mark Hoffman and the occasional third-party videographer to film most of the interviews and supporting footage. The tactic required a lot of planning, troubleshooting and on-the-scene communication between the Journal Sentinel and 10thirtysix teams regarding everything from framing to the wording of questions.

In a departure from the traditional field cameras Milwaukee PBS typically uses for television, producers opted to shoot the documentary on DSLR cameras.

“[DSLR cameras] just create a warmer, more intimate look,” Meyers said. “I really think it helps with stories like this where we are dealing with emotional characters.”

After nearly nine months on the project, the 10thirtysix team wrapped in January with its second and final segment, America’s Dairyland: The Next Generation, about innovations in technology that will affect the industry. According to Meyers, the team is currently considering whether it can develop unused footage into additional segments later down the road.

“The great thing about this journalism initiative from Frontline is that, yes, they helped us work on this singular project, but it’s also about carrying it forward and building capacity,” said Meyers. “So I do think we now have more tools in our belt to do this style of storytelling in the future.”

Bennett said that he hopes the program will continue to bring investigative journalism to audiences that wouldn’t otherwise receive it.

“Local journalists are kind of first responders in the effort to keep democracy healthy,” Bennett said. “And I think whatever any of us can do to support them financially, editorially, moral support, legal support, those are all investments in the common good that are not just going to pay off, but [are] urgently needed.”

Milwaukee PBS was recognized with the 2020 Public Media Award for Excellence in Overall Content by the National Education Telecommunications Association on Jan. 28 for programming that included their investigative collaboration with Frontline.