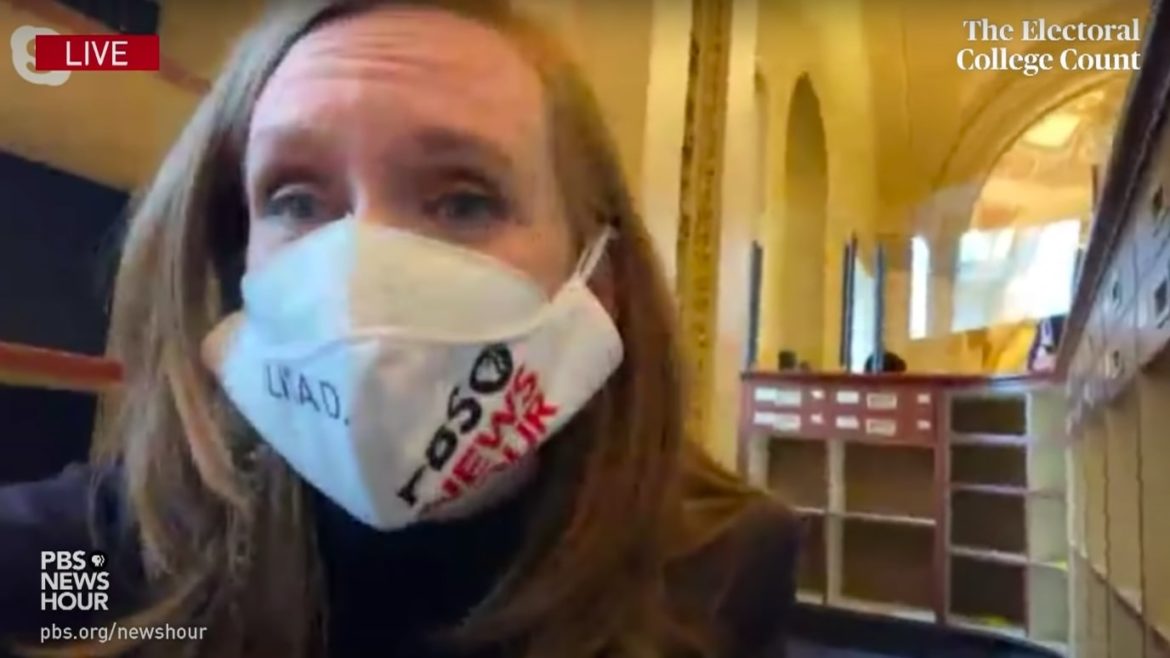 While Judy Woodruff was anchoring PBS NewsHour’s special coverage of the Electoral College certification Wednesday afternoon, political correspondent Lisa Desjardins called in to report that pro-Trump rioters had broken into the Capitol.

After reaching the balcony of the House chamber, Desjardins used her work cell phone to Skype with Woodruff about the chaos. The seven-minute video includes scenes of the lockdown, including a moment when police shouted at her to stay down as they secured the area. When Desjardins identified herself as a member of the press, the officer told her to move with members of Congress, Hill staffers and other journalists who were preparing to shelter in place. During the commotion, Desjardins lost her glasses.

Desjardins and other public media reporters who were reporting from outside the Capitol took as many precautions as possible to avoid violent encounters and protect themselves from the coronavirus pandemic. Desjardins wore a cloth PBS NewsHour mask over an N95 mask and was glad for the extra protection. Many of the protestors did not wear masks.

Dominique Maria Bonessi, a reporter for WAMU in Washington, D.C., wore a gas mask and a helmet — gear that her husband, who is a veteran, let her borrow. “He has all this stuff just lying around the house,” she said.

Most of Bonessi’s reporting focused on President Trump’s speech telling his supporters to take their protest to the Capitol.

In her interviews with Trump supporters, she asked if they would resort to violence if the election is certified for President-elect Joe Biden. Most answered “no,” but she got a “yes” when she asked whether violence would be justified when that happened.

In the end, Bonessi and 10 other WAMU journalists contributed to the station’s coverage of what became a “fatal insurrection.”  She also contributed to NPR’s Here & Now, produced by WBUR in Boston. Juggling all of this coverage was difficult because access to 5G data was sporadic, Bonessi said.

Desjardins also documented much of what happened outside and inside the Capitol on social media.

On Instagram, Desjardins described an exchange with one woman who asked which media outlet she was with. When she replied that she worked for NewsHour, the woman told her, “Oh, we like PBS! You’re not as fake as the others!”

In other encounters, people who didn’t know NewsHour recognized Sesame Street or Ken Burns’ films. The affiliation helped her navigate between rioters who may have been sizing her up before deciding how confrontational they were going to be, she said.

If she hadn’t decided to bring along her backup work phone, Desjardins said, she wouldn’t have been able to do the Skype video.

To her, the most shocking and memorable moment was when she realized that the mob was breaking into the Capitol. She said Thursday that she was still thinking about how few police officers she saw at the scene.

“I took a moment to really calm myself, to check my own heart rate and make sure I wasn’t making bad decisions,” she said, adding that she tried to balance being on social media and making sure her reporting was going to help the NewsHour’s coverage. “That moment really served me for hours. I started by just trying to ground myself.”

Desjardins appeared on the NewsHour’s evening news program and continued her reporting into the night, as Congress debated and eventually certified Biden’s victory.

At 3:45 a.m. Thursday, after an afternoon, evening and night of extraordinary news, Desjardins tweeted, “My deepest thanks to all of you for the incredible support and Twitter embrace today. It meant more than you could know. Going home now, so glad to say.”

2 thoughts on “As mob breached Capitol, Lisa Desjardins ‘took a moment to really calm myself’ during long day of coverage”