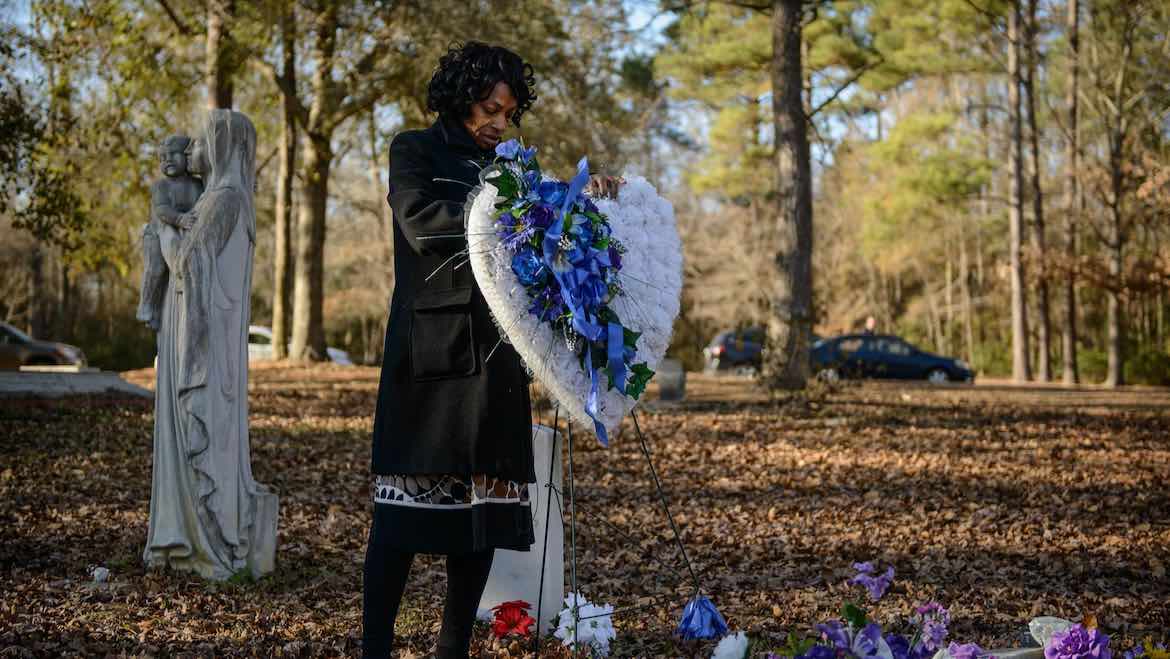 Claudia Lacy cleans up the flowers at the grave of her son, Lennon Lacy, Dec. 14, 2014, at Old Shaw-Lacy Field Cemetery in Bladenboro, N.C.

What really happens when public TV audiences watch the kinds of documentaries that show up on POV and Independent Lens? Those are the highly crafted, award-winning documentaries by indie filmmakers who often pick up the really complex, painful issues, like lynching. Today. In America. A film like the Independent Lens offering from February 2020, Always in Season, by filmmaker Jacqueline Olive.

At the Center for Media & Social Impact (CMSI), directed by Prof. Caty Borum Chattoo, we’re interested not only in what creators make and intend to happen, but what actually does when people see their work. As a scholar at American University, I both research and train researchers to generate empirical data to support or disprove hypotheses. And as a board member of the Independent Television Service, I’m acutely aware that ITVS gets taxpayer money to contribute to public understanding and enrich public conversations, as well as to make films that make for destination viewing.

So it was an honor to join a CMSI study that allowed us to look at a timely film and a series of community conversations that surrounded it. (The research was funded by the Ford Foundation, via ITVS.) David Conrad-Pérez, Caty Borum Chattoo and I gave ourselves this challenge: to find out how public TV viewers actually experienced and understood what Always in Season communicates. The film puts a terrible and traumatic 2014 incident — when a teenage boy was found hanging by his neck from a playground swingset in Bladenboro, N.C. — in both a historical and present-day context of lynching of Black Americans and racial violence, more generally, across the U.S.

More than 70 public TV stations and ITVS partner organizations held in-person viewings of the documentary in February 2020 as part of ITVS’ Indie Lens Pop Up series. ITVS helped CMSI connect with community stations and partners in seven of these demographically and geographically diverse communities for our study. We developed a survey for all viewers and a set of targeted focus-group questions through a participatory process following consultations with issue experts, including Radical Optimist, an organization with deep experience in creating “brave spaces for vulnerable conversations,”  and community members in each of the participating cities. The conversations were then held in confidential, public convenings following the documentary. Would the film just “preach to the converted” or encourage speaking across difference? Did viewers trust what the documentary was saying? Did in-person conversation change anything?

Well. An explosive topic, at a time of racial reckoning across the country. (The pandemic was brewing, but stay-at-home orders hadn’t been issued yet.) Would people even want to participate?

Yes, they would. In fact, more than 200 completed our survey, and more than 100 participated in seven focus groups.

Here are some of our takeaways:

The place matters. People trust their public TV stations and programming, at a time when they suspect national media are hiding uncomfortable realities. Public TV stations can convene people for challenging discussions because they can leverage that trust.

The medium matters. People trust public TV’s documentaries to tell them things they need to know and won’t find elsewhere. They connected to this story immersively and emotionally, and that helped them understand the complexity of the issue and its implications for their community. “I think it puts you in the shoes of people better than the news. … Watching that documentary, you feel embarrassed,” said a white participant in Carbondale, Ill.

The in-person nature of the event matters. Talking with other community members about it really helped them process the experience and to think about how the film connected with their own community’s experience. It made them want to work across difference in their own communities in the future. “Outlets like this where people can just hash out issues,” said one Herkimer, N.Y., participant, “it’s very refreshing.”

In Concord, N.H., a participant remarked, “It was great to see this in a group setting because here is a feeling of community. You’re not in it all by yourself.”

The way the event is organized matters. Crucially, there were no experts and no panels. Facilitators were there only to help people talk together as equally expert members of their own communities. The audience became the actors in the event.

Change happened. New conversations happened. Some white participants worried about the effects of seeing racial violence on children, while Black participants were not as worried, believing this was already part of their children’s experience. This was a breakthrough moment for some. Also, white participants heard from Black participants, sometimes for the first time, stories of daily lives in which racial violence and discrimination were all too familiar. In almost every situation, people believed that the occasion broke a “culture of silence” on race in their community.

They also found people they trusted with whom they could break that silence. And they wanted to continue to work together. “I wondered to myself, why are the white people in this community not standing in solidarity with this family?” said a participant in Durham, a city near the 2014. “Why were we not driving there, to Bladenboro, to demand justice for these people?”

We think there are takeaways for public TV leaders in this study. Documentaries are a critical asset for public TV. Stations are a trusted site for in-person (and, in the time of a pandemic, high-touch virtual) conversations across difference, at a time of unprecedented social division. And people welcome the opportunity to move beyond being audience members and becoming changemakers for communities that their public TV stations so proudly represent.

Patricia Aufderheide is University Professor in the School of Communication at American University and a member of the board of directors of the Independent Television Service.