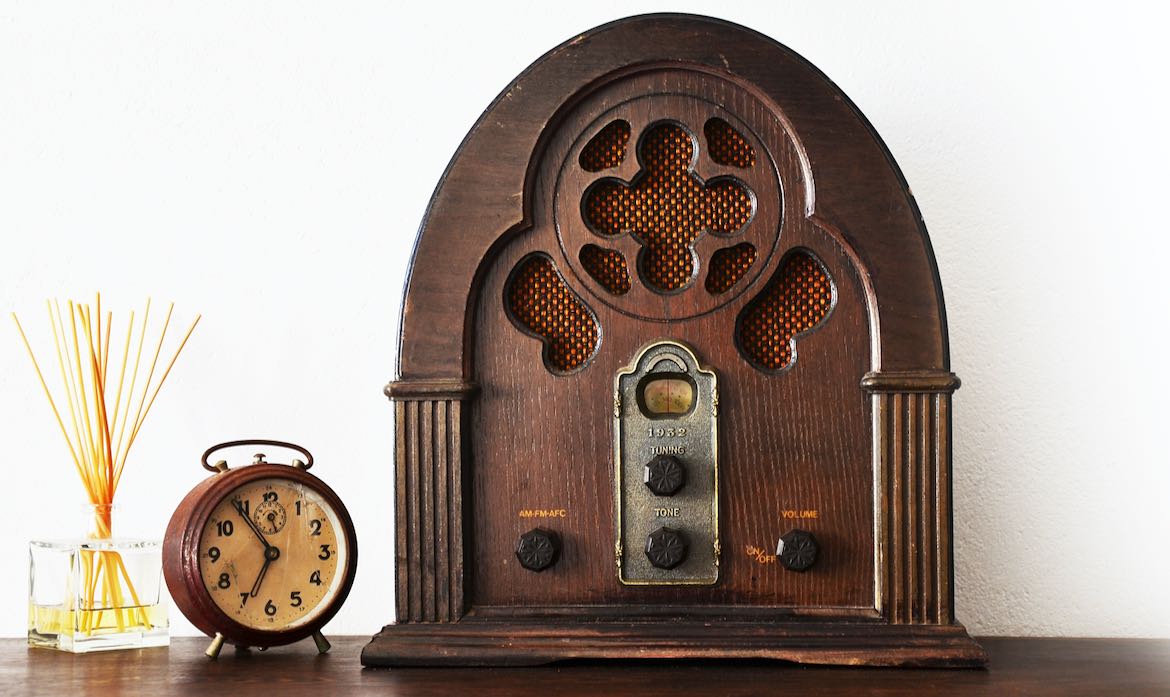 It’s about time. Now, you might be thinking of the election. Or perhaps of that whimsical 2013 British film, About Time. Its awed protagonist (Domhnall Gleeson) arrives at 21 to learn from his dad (Bill Nighy) that males in their family tree possess a unique power: time-traveling, though backwards only. Hence, flopped wedding toasts, for instance, can be redone by others (until lovingly spoken by his dad, at last).

Aside from a couple of filmmakers’ fantasies, this column meditates about time from the perspective of radio broadcasters. We go by the clock, always. Producers pace their work to meet deadlines for airing new features. In the moment, we think about the quality and pleasantness of the time listeners spend with our programming. Meanwhile, we look ahead, planning for the next week or year.

As on-air hosts we must nail hourly news breaks, first incorporating elements such as underwriters and a full ID. Prerecording lessens the pressure. But live, your sense of time becomes both blurred and compressed — at least, it usually is for me in the swirl of on- and off-air tasks during a shift, itself demarcated by time. Live music hosts develop an uncanny notion of a concerto nearing its finale, not just from hearing the dazzling cadenza but from another ability, an overall sense of time.

So that makes really six senses, right? You clink goblets to commence the senses with sound; you see the wine, sample its smell and taste, then feel liquid going down your throat. All this merriment happens in a dimension of time, the sixth sense. Author Bill Bryson alludes to two dozen more senses in his book, The Body: A Guide for Occupants, including a sense of balance — whose extreme loss your body equates with poisoning, causing immediate nausea to save you in time.

Our hallowed Digital Era of new technology and “progress” brought mixed blessings indeed. Early on, glitzy CDs suddenly lacked the satisfying concert-hall depth of quaint but warm analog vinyl LPs. Devastating for audiophiles. Touch screens and mini-keyboards challenged those of us with clumsy digits. Also frustrating. But for morning hosts glued to time, give us a big digital clock every day, not that ubiquitous analog near the shadowy ceiling. Please.

Our lives are about time, obviously, the hatch-match-dispatch march of fleeting years. Those ironic New Yorker cartoons with tombstone inscriptions prod us on the priorities of life. The time devoted to work and career gets divided into phases, from neophytic to finally mature, by years here or years there. A most-telling career confirmation dawns when, day in and day out, the radio hours breeze by in a flash. You often pass into “the zone,” the absorption of a calling, rather oblivious to time.

Memories of feeling most alive and yearning naturally dwell on time. Remember that 2006 radio interview when the stars aligned, where insight, emotion and outsized personality resounded? Or the epiphany of discovery, of new music or surprise champions in sports? We instantly place our on- or off-air location for 9/11 or space shuttle disasters, those searing moments locked in slow motion, haunting us. How will we recall the Time of Trump? Recent elation now gives way to dread. News hosts and reporters have the greatest grasp of his term, being immersed in his tweets and stunts in real time.

Our varying perception of time with age remains a mystery. One theory posits that in youth, with everything new, our mind records all in fresh detail. An hour in ninth grade before afternoon soccer feels like eternity. Over the years, an hour contracts. Our brains may pulse differently as we age, noted Robert Krulwich in an NPR feature. On-the-street interviews of people in their twenties versus eighties demonstrated that the elderly perceive a minute as being slower, more elongated (taking nearly 90 seconds when personally estimated, eyes closed). So with age, we may lose the ability to accurately measure time. But, because we broadcasters have honed this sense, maybe we’ll savor our twilight years a bit more.

Looking back, our radio productions capture reality like time capsules. My own features on music in Alfred Hitchcock films were inspired by the timeless quality of those films; in your imagination the drama perpetually unfolds. For another unforgettable film, unsung composer David Amram exquisitely captures an era with a score blending jazz and classical: in Splendor in the Grass (1961), youth and yearning and fate get frozen in time like pressed flowers. Finally Deanie (radiant Natalie Wood) leaves her elusive love, Bud (debuting Warren Beatty), for the last time. As the car pulls away, she recites lines of William Wordsworth in her wistful mind.

Though nothing can bring back the hour
Of splendor in the grass, of glory in the flower,
We will grieve not, rather find
Strength in what remains behind.

The heart-wrenching scene fades out yet THE END never appears. And somewhere, too, our best radio work lives on, beamed out in space traveling the universe through time.

Peter M. Johnson, MBA, MS (ecoessays@aol.com) is a radio consultant and was music director for four public radio stations; exclusive radio producer for the Aspen Music Festival; and creator/producer of the past series ECO-Essays and The Author’s Corner.

One thought on “For broadcasters, time is of the essence — and a well-honed sixth sense”