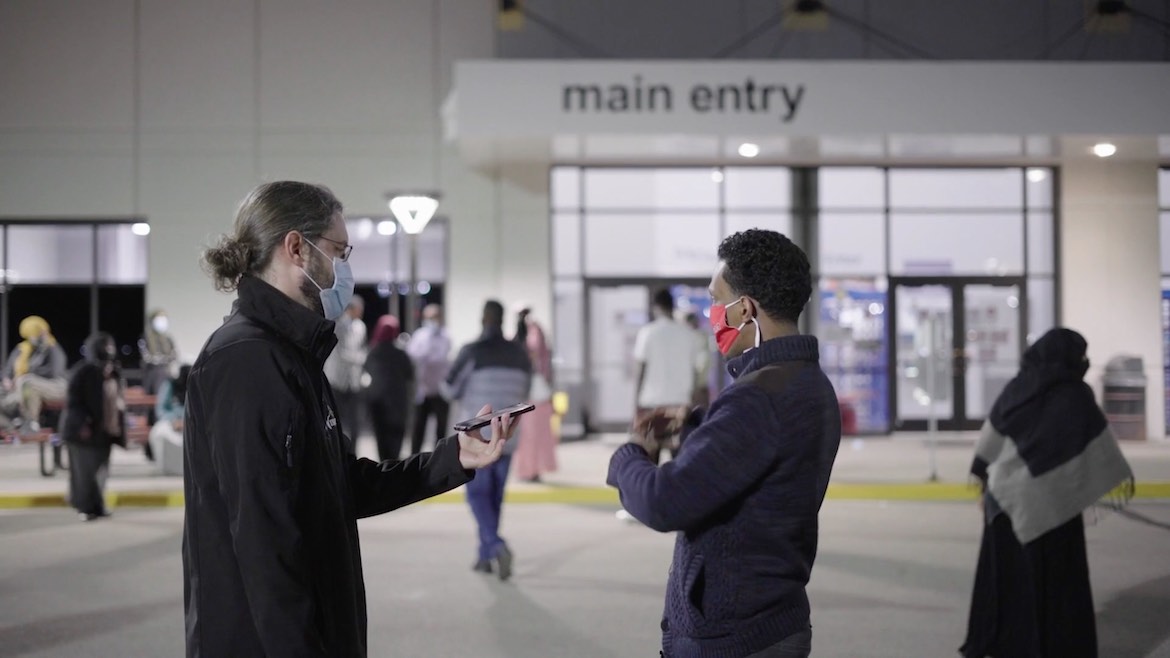 Sahan Journal reporter Joey Peters conducts an interview outside of an Amazon Fulfillment Center where employees staged a walkout over firings and working conditions.

More than ever, local journalism is a need which public media should be — and is — filling, as Current’s national Local that Works competition and database helpfully make clear. The sharp decline in both local newspapers and the newsroom staffing of those that survive cries out for the public media cavalry: 1,000-plus licensees all across the country, in big cities and small towns. Local journalism is part of the lifeblood of democracy; it holds public officials accountable and draws citizens into an understanding of their communities and debate about their direction. The need for such a public good is among the best and highest uses of the taxpayer support for public media.

That’s made clear by the fact that a small Minneapolis project, Sahan Journal — focused on immigration in that city — won Current’s Local that Works award this year. That sort of deep local reporting helps raise awareness that immigration, notably that of Somalis, is changing the face of that city in ways that might surprise some. The Current listing of Local that Works public media projects points up a range of stellar work: Texas Standard’s statewide public radio coverage of the climate policy debate and the oil and gas industry, COVID-19’s incidence in the Rio Grande Valley and changes in Texas unemployment compensation rules (all recently covered) are classic examples of finding the local angle of national stories. The “SF homeless project” of San Francisco’s KQED focuses on the problem roiling that city. The “Capitol Coverage” of KUNC Colorado provides a service hollowed out by the decline of local newspapers: statehouse coverage.

At the same time, however, a review of the submissions to the Local that Works contest reveals two serious problems: too great a focus on finding local examples of national problems, at the expense of truly local coverage, and a funding formula that continues to favor television, even as much of if not the most ambitious journalism is occurring in audio — radio and podcasts.

The issues that define the national political conversation are well-known: police shootings, housing affordability, income inequality. To the extent that such issues are truly bubbling up in individual communities — inspiring concern and debate, perhaps political action — they, of course, merit coverage. One fears, however, that this has become the definition of local journalism: finding examples of national issues and illustrating them through local example.

The presence of frontline reporters throughout the country provides a different sort of opportunity for public media journalism: to surprise, to uncover, to find not just the local angle but the issues that are most engaging local citizens and might be of broader interest as well. It could be whether to build a new local high school, to permit a new development, to change zoning. These are weighty matters in the context of local budgets and are at risk of being debated in a journalistic vacuum. They are the sort of issues that reporters find out about not by looking for examples of prior assumptions but by attending local board meetings and paying close attention. A decision about building a new high school might turn out to be a story about immigration if the children of immigrants would be served but older native-born taxpayers would bear the cost.

A story about the finances of a struggling community hospital could reveal a novel health problem leading to emergency rooms being overwhelmed. There was a time when the opioid addiction problem was far from well-known — and close attention at the local level in the afflicted Rust Belt and Appalachia might have “broken” the story.

Indeed, original and enterprising local and regional public media reporting would ideally provide material for NPR and PBS, which themselves too often report on a predictable set of topics. There is an unfilled niche for both — the surprising local story that turns out to have national significance. The New Yorker’s Calvin Trillin once specialized in this sort of reporting, in his famous “U.S. Journal” column. All Things Considered and PBS Newshour are both in desperate need of journalism that reflects the diversity — in all respects — of America.

It will, however, take more than a change in sensibility for public media to produce more such journalism. The system is hobbled by the limitations of the terms of the Public Broadcasting Act. There is simply no reason why a funding formula that reserves 75% of grants for television and just 25% for radio continues to make sense. Today, we see audio, video and podcasts all overlapping on websites and apps. We must not starve public radio licensees of funding for reasons that made sense 50 years ago. At that time, the legislation assumed that, as it said, “creative risk” had to be supported in television, then considered a “vast wasteland.” Today, we are in a golden age of creative risk on Netflix and Amazon Prime and face a withered local journalism landscape. The public media formula — modest government support matched by local charitable dollars — can work. But it will do so only if local licensees are creating original content that donors feel motivated to support.

CPB’s Regional Journalism Collaboratives support much good work but suffer as well from top-down diktat of story selection. Supporting journalism about agriculture in Kansas and energy in Pennsylvania makes sense superficially, but such funding risks directing reporting to the obvious stories. What’s needed is unrestricted support for local and regional journalism qua local and regional journalism. The same problem is manifest in philanthropic funding at the local and national level. It may well be that it’s crucial for there to be financial support for reporting on education, the environment, the arts or “a just and verdant world” (as implied by the tagline for the MacArthur Foundation’s NPR support), but no one can predict what sort of reporting will really be what we need. See pandemic, 2020.

It is, in other words, a time of great opportunity for public media — but also great risk. Its advocates should not be afraid of revisiting its authorizing legislation to prepare for the country’s changed needs.

Howard Husock was appointed to the CPB board in 2013 by President Barack Obama as a Republican member and served on the board until 2018. He is a senior fellow at the Manhattan Institute and author of the book Who Killed Civil Society? From 1987–2006 he was the director of case studies in public policy at Harvard’s Kennedy School of Government. From 1978–2006 he was an reporter, producer and director at WGBH, Boston, where his work was a awarded a National News and Documentary award (1982), the Robert F. Kennedy Journalism award (1979) and the Corporation for Public Broadcasting Local Programming Award (1981).