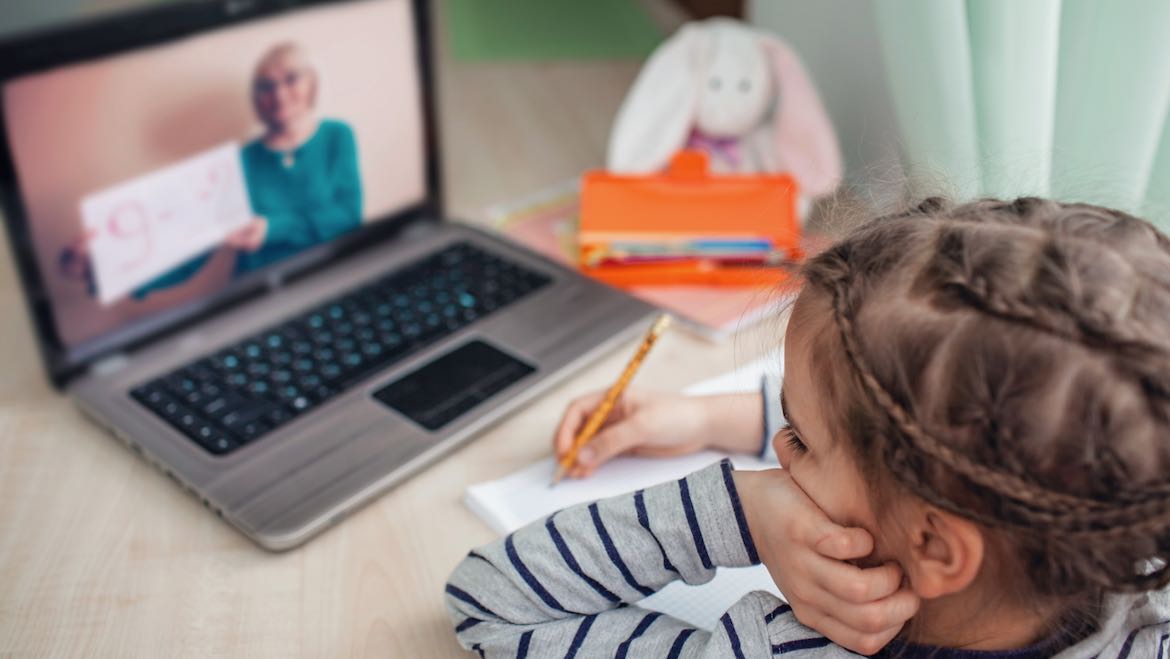 A yawning chasm called the digital divide segregates American communities with high-speed internet access from those without, and educators are scrambling to keep the have-nots from falling behind in their studies as the COVID-19 pandemic stretches into another academic year.

“We’re looking for whatever solutions we can to make sure that all kids can learn. Some of these students who are in these situations are already in poverty, and education becomes a pathway out of poverty,” said Ben Smith, who taught high-school physics for 27 years and now serves as assistant director of educational technology for 25 school districts across south-central Pennsylvania.

Teachers in his region tried to ensure continuity when schools shut down in March, Smith said, but efforts to bridge the digital divide didn’t work well. Students in rural counties would try to access Wi-Fi while sitting in cars in school parking lots, or they’d have to wait for packets of materials to go through the mail. Additionally, mobile hotspots don’t work in places with spotty cellphone reception.

Considering all those barriers to remote learning, Smith is optimistic a statewide pilot program might help bridge the gap this fall.

“Datacasting is not broadband internet, but it’s the ability that public broadcasters have within their systems to send out computer files, PowerPoints, PDFs, videos, audio files basically in a secure and encrypted way over our broadcast signal,” said Ron Hetrick, CEO of WITF in Harrisburg.

Any household that can tune in a television signal can also receive datacasting through a special receiver, which, Hetrick said, “is wonderful in states like Pennsylvania” to reach remote rural regions and address the economic divide in urban areas like Philadelphia, Pittsburgh and Allentown, where some families cannot afford pricey broadband plans.

About 30% of Pennsylvania students don’t have high-speed internet access and 10% don’t have internet access at all, according to Tim Fallon, CEO of Lehigh Valley Public Media in Allentown. Many of the pilot’s details remain to be settled, but Fallon said they expect seven to 10 Pennsylvania districts to begin datacasting educational materials to their students by December.

The $8 million grant will be split among Pennsylvania PBS’ seven member stations to build out the infrastructure that allows them to datacast, conduct the pilot program and further support the Learning at Home initiative launched in March. As part of that program, each station is airing a four-hour block of weekday educational programming geared at students from kindergarten through 12th grade.

This grant dips out of the $104 million bucket that the federal Coronavirus Aid, Relief, and Economic Security Act allocated to the Pennsylvania Governor’s Emergency Education Relief fund. In total, the CARES Act divvied up $2.9 billion in GEER funding for all 50 states to use for the safe reopening of schools during the pandemic.

Public television stations in about a dozen states are in talks with state and local education leaders about how they might fund datacasting services, according to Pat Butler, CEO of America’s Public Television Stations, an advocacy nonprofit that works to help stations secure funds to fulfill their missions in education, public safety and civic leadership.

“The more ways in which we can pursue these missions, and the more effectively we pursue them, the more likely it is that we can earn the support of state and federal lawmakers,” Butler said. “These are investments in their own communities and their own constituents’ lives and so forth, rather than just a contribution to another television programming service.”

APTS is currently hosting webinars for television stations and reaching out to local, state and federal legislators to “cross-pollinate” knowledge about datacasting and highlight various funding opportunities the CARES Act has opened up for states, Butler said.

Datacasting first came to APTS’ attention about 20 years ago when the analog-to-digital transition compressed broadcasters’ signals and freed up space in the spectrum. Kentucky Educational Television started using datacasting to help public safety officials transmit videos and other files quickly to better respond during emergency situations like tornadoes, Butler said.

Fast forward to 2015, and the Department of Homeland Security and Johns Hopkins University experimented with datacasting through public television signals in Chicago and Houston to allow first responders to securely and reliably receive data and videos to prepare for what circumstances might greet them upon arrival at emergency situations.

This shift to educational uses is new, though, and Butler said datacasting has even greater potential beyond public safety and COVID-era education. He envisions uses in telehealth, smart cities and precision agriculture, which could create new revenue streams for public media.

“These type of efforts … truly cement the idea that public media is not a nice-to-have consideration. We are a must-have partner in the educational system of America,” said Fallon of Lehigh Valley Public Media. “We didn’t pivot to do this. … We just enhanced what we had been doing for 50 or 60 years.”

The datacasting equipment deployed by each station is a small box that costs about $20,000, according to APTS COO Lonna Thompson. Combined with costs of cabling the box into a station’s existing infrastructure, installation shouldn’t run above $50,000. The receivers that will go into students’ homes run in the range of $100 to $225.

Butler re-emphasized all these devices could be purchased through CARES Act money already disbursed to the states.

Aside from installation costs, datacasting’s primary limitation is that it’s a one-way stream. Butler acknowledged the technology is not truly interactive. Teachers will be able to send out materials, but students won’t be able to send them back for grading or discussion.

“We see datacasting as part of the communications ecosystem — not that we have to solve every problem, but we’ve got some very powerful tools at our disposal that can help with everything from controlling wildfires to helping kids learn in school,” Butler said.

The datacasting pilot in Pennsylvania will run at least a few months in schools within the state’s “most disconnected regions,” Hetrick said. Since schools have the most familiarity with their students’ situations, the pilot relies on districts to identify those most in need of the datacasting receivers.

Pennsylvania PBS will work with the state Department of Education to gather metrics on connectivity and subjective feedback on curriculum delivery from students, teachers and districts, Hetrick added. The analytics and feedback will allow them to tweak the user experience before deploying datacasting on a statewide scale.

It may not be the perfect replacement for in-classroom learning, but Smith, the administrator from south-central Pennsylvania, said datacasting will get them far closer than the packets of worksheets his school districts are currently sending out to students.

“When you’re teaching in the classroom, you can see it in their eyes whether they’re getting it or not. And, of course, when you’re at a distance that becomes difficult. Not impossible, but difficult,” Smith said. “What the students can’t get is the rich content that really engages learning. Being able to deliver the large volume of data that you can through datacasting is going to provide a much more rich experience for those students.”