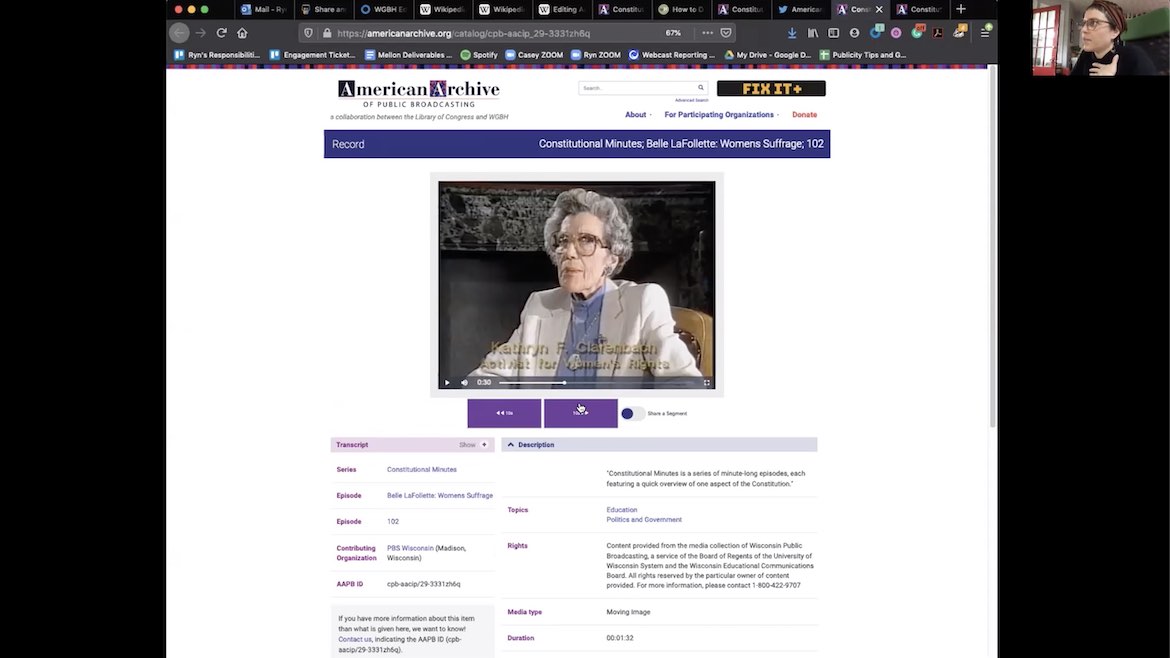 The American Archive of Public Broadcasting is holding a series of Wikipedia “edit-a-thons” to teach volunteers how to incorporate historical content from the archive into Wikipedia articles.

Edit-a-thons help to revise and improve Wikipedia pages about a specific topic or type of content. The first edit-a-thon, which was held Thursday, had a “Constitution Day” theme, selecting from AAPB archives and exhibits that concern free speech and protests as they relate to the U.S. Constitution. Volunteers pulled from AAPB’s Constitution Minutes and America Past series, as well as its Speaking and Protesting in America exhibit.

The series is part of a partnership with Wikimedia DC, a nonprofit organization under the umbrella of Wikimedia that aims to improve the site’s quality. The AAPB’s primary goal is to preserve “at-risk” media that must be digitized before it becomes unusable. Its collaboration with Wikimedia is focused on making Wikipedia more accurate while also making AAPB archival content accessible.

The partnership is mutually beneficial: Wikipedia becomes more reliable, and the AAPB exposes its content to a wider audience and keeps it accessible for future generations.

“We like to think of this as just a way to start somebody, if they’re a new editor, start a relationship with Wikipedia,” Cetrone said. “And then just really share the sense of community within Wikipedia and hope that people choose to join that community.”

The AAPB’s biggest hurdle will be retaining webinar viewers to continue their efforts in the future, according to Cetrone. Cetrone chose to keep sessions short to try to engage more people.

Cetrone and AAPB Engagement and Use Manager Ryn Marchese both hope the series is the first step of a longer partnership.

“Having connected with individuals at the AAPB that are open to working with us is always such a pleasure because it makes our job much easier,” Cetrone said. “We don’t necessarily have to force people or push people to understand the value of this.”

Immediately following the training session, Wikimedia held a second 90-minute session to provide guided editing for first-time editors. The AAPB is selecting the content and the pages to edit.

To follow the Constitution Day theme, attendees edited pages like one about Belle Case La Follette, a women’s suffrage advocate of the early 1900s who was influential in the ratification of the 19th Amendment, which gave white women the right to vote. Her Wikipedia page had citations but lacked hyperlinks that properly sourced information.

Adding audio and visual content to Wikipedia can help liven up pages about people who lived centuries ago and topics featuring predominantly black-and-white photographs and sources without hyperlinks. During the edit-a-thon, members added a link from the Constitutional Minutes series to verify that La Follete was the first woman to graduate from Wisconsin Law School. A user who clicks the link will now find that information as well as a description of her other accomplishments from Wisconsin Public Broadcasting.

“We have audiovisual examples of interviews with historical figures or live coverage of historic events, things that only public broadcasts can give audiences,” Marchese said. “And now that content has been made available. And so now that we have the resources on our end, we’re hoping to just continue that circle of finding important information.”

The edit-a-thon series will also include a Hispanic Heritage Month event Oct. 15 and a Voices of Democracy day Nov. 19, which will focus on public media’s coverage of presidential elections.