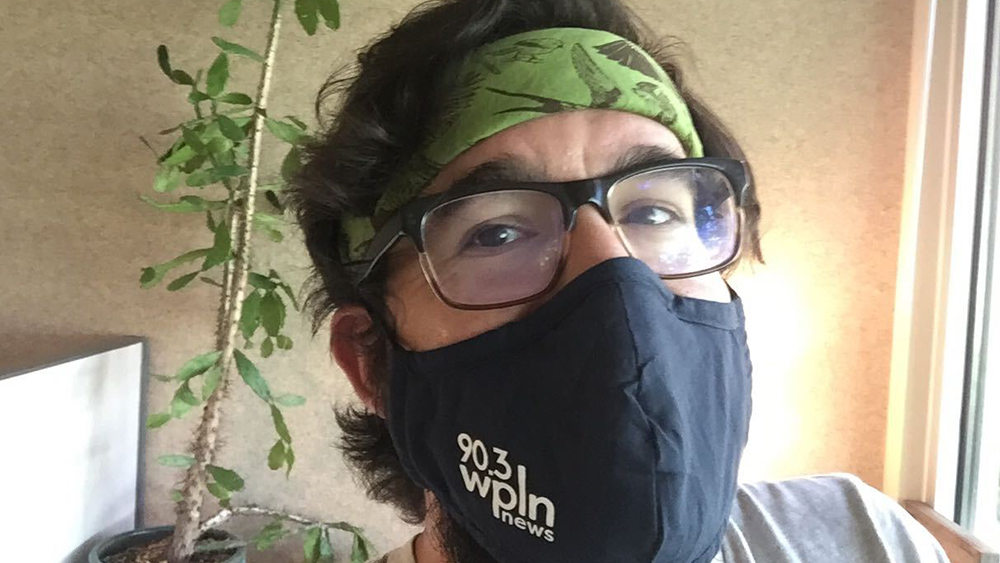 Move over, socks, mugs and tote bags — a new premium in public media is seizing on an urgent need among many audience members.

Face masks branded with logos are now available from several stations, including KPCC, KPBS and Nashville Public Radio. Offered as premiums for donations, the masks are helping some stations address revenue shortfalls caused by the COVID-19 pandemic.

In March, KPCC in Pasadena, Calif., was anticipating a potential loss of $10 million in revenue over the next 15 to 18 months, according to Rob Risko, director of membership and leadership circle giving for KPCC parent organization Southern California Public Radio. Intense fundraising efforts have shrunk that gap by 70%, Risko told Current in an email, but the shortfall is still “very significant.”

KPCC began offering masks in mid-June made by local vendor Quench Promotions as a bonus gift for any donation during a two-day member drive for the end of the fiscal year, Risko wrote. It then extended the offer into the new fiscal year.

KPCC has given audience members more than 2,700 masks, according to Risko. Gifts from those who selected a mask as a bonus gift have totaled almost $287,000. While those donors might have donated regardless of whether they received a mask, Risko wrote that he has “no doubt” that offering them helped.

“We only mentioned them a few times on-air during our 2-day June fundraiser,” he wrote.  “KPCC listeners are clearly looking for a useful gift that also allows them to show their support.”

Nashville Public Radio’s marketing staffers came up with the idea of selling masks after they gave employees masks branded with the station’s logo and name in white.

“As soon as the reporters started wearing them, they started receiving requests from friends, family and people on the street,” Donna Robinson, VP for development and marketing, wrote in an email.

Nashville Public Radio initially offered masks to the public starting July 24 in its newsletter in exchange for a $10 add-on to a new or renewed membership. As of Thursday, the station had given out 75 masks and raised over $2,500, according to Robinson.

The extra income has been especially helpful after the station canceled its spring drive due to the pandemic. A one-day “match-a-thon” April 28 raised $75,000 but brought in fewer new members than usual, according to Robinson. The station plans to offer masks in September as part of its drive.

“The marketing aspect of people wearing our logo is icing on the cake,” Robinson wrote.

Nashville Public Radio got its masks from Visability, a supplier that produces station-branded merchandise including tote bags, mugs, and T-shirts for many public media stations.

Suppliers associated with Visability began preparing and manufacturing masks in April, and stations began requesting masks with special branding in May, according to Visability owner Janice Gavan.

Stations can request designs and features that include adjustable straps, easily washed materials and multiple layers. Some stations have asked for speciality features, such as pockets for filters and metal nose frames to hold masks in place.

Visability’s masks are not medical-grade but work as a practical tool to prevent transmission of the virus, Gavan said.

“Pubmedia stations and program producers take seriously their public service mission,” she wrote in an email. “Providing face coverings during a pandemic … makes an obvious product choice for station giveaways and premiums.”

San Diego’s KPBS purchased non–medical-grade face masks for staff and began offering them to its audience June 30 as part of a radio pledge drive, according to Heather Milne, director of communications. Face masks went to 279 donors who gave an additional $10.

Milne believes that stations offering masks is an “interesting twist” to public media’s well-known reliance on tote bags as premiums.

“You know, if you’re a member of a public media station, how many tote bags do you have?” Milne said.

NPR is also offering face masks through its NPR Shop for $18 each. Made by Known Supply, the three-layers masks are available in adult and kid sizes.