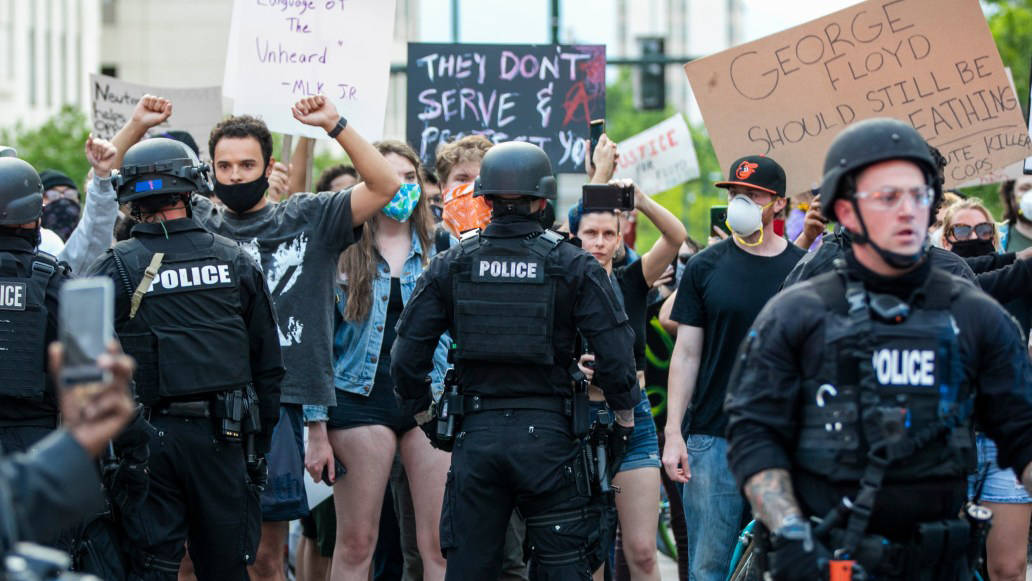 Demonstrators protest in downtown Denver against police brutality May 28.

Public media stations are working to improve safety guidelines and procedures after journalists found themselves unprepared for covering the recent protests against police violence.

Reporters at media outlets across the country have had tense encounters with police officers when covering the protests sparked by the killing of George Floyd. These experiences prompted newsroom leaders at Colorado Public Radio, WHYY in Philadelphia and KPCC in Pasadena, Calif., to revisit safety procedures for reporters and implement new guidelines to protect them in future situations.

“We were not prepared for the level of conflict that we were seeing,” said Megan Garvey, executive editor at KPCC.

Reporters have been threatened and attacked at the protests at an “unprecedented” rate, according to Kirstin McCudden, managing editor of the U.S. Press Freedom Tracker. McCudden’s organization typically identifies 100 to 150 incidents of press freedom violations in the U.S. each year. McCudden has documented and verified more than 430 incidents at this year’s protests, at least 11 of which involved public media journalists.

NPR hosted two webinars for public media journalists this month after receiving “a huge number of questions from station colleagues looking for information,” according to Gemma Hooley, senior vice president of member partnership. The webinars covered necessary equipment for covering the protests, risk assessment and mitigation, and tips for situational awareness. About 200 people attended the webinars, according to NPR.

For its own staff, NPR provided refreshers, webinars and debriefs to prepare reporters covering protests. All NPR journalists who report from the field also take a prerequisite course in hostile environment training, according to Caroline Drees, senior director of field safety and security.

Three reporters at KPCC were involved in police incidents while covering protests, according to the U.S. Press Freedom Tracker. Reporter Adolfo Guzman-Lopez was hit in the throat with a rubber bullet and tweeted photos of the wound.

KPCC senior reporter Emily Guerin, who usually reports on energy and the environment, was covering protests in Los Angeles May 31 when a police officer threatened her and colleague Chava Sanchez for approaching him.

Guerin had previously received training about covering wildfires but said the only other advice she had received before reporting on the protests was about the need to report in pairs.

KPCC’s Garvey said that she was surprised that station reporters still experienced violence even when working in pairs and trying to avoid crowds. After the incidents reporters experienced, she felt the station’s journalists were at risk and lacked “proper instruction,” she said. The next day, she took “a total pause” for two days on sending reporters to cover protests.

She said that she used the time to “regroup” with peers remotely, obtain additional personal protective equipment and set up partnerships with other newsrooms, including KCRW’s, to pair up reporters.

‘This all grew up organically’

News Director Rachel Estabrook said that she had not coordinated training for covering the protests. “We didn’t do as much in advance as I would’ve hoped, in retrospect,” Estabrook said. “But we tried to jump on it really quickly.”

Estabrook helped write new safety guidelines for field reporting that include staying away from the center of the action while doing field reporting and provided the reporters with contact information related to emergency health care. The station has also bought new personal protective equipment, including goggles and gas masks. Estabrook said she hopes to implement training for covering protests.

WHYY hadn’t provided substantial safety training since 2016, according to News Director Eugene Sonn, when the station was anticipating civil unrest at the Democratic National Convention in Philadelphia.

Like CPR, WHYY didn’t anticipate that the protests would become violent.

“It’s much easier to prepare for a large-scale protest if it’s something you can see on the horizon, but this all grew up organically,” Sonn said.

“I don’t think it would hurt to have some sort of protocol,” Wolfman-Arent said.

After Wolfman-Arent’s arrest, Sonn watched one of NPR’s webinars and revised precautions and procedures for field reporting. The guidelines now advise that editors and reporters have each other’s contact information and coordinate check-ins while the reporter is in the field. Reporters should also work in pairs with photographers. Sonn is finalizing a list of personal protective equipment that WHYY can supply to their reporters.

Administrators delivering NPR’s webinar said that providing similar training on a local level would be difficult because “it’s intense and it’s expensive,” Sonn said. Going forward, he said, it would be helpful if NPR could facilitate regional trainings because the network could help with funding and resources.

Despite the risks, Sonn said he is thankful that WHYY reporters covered the protests while following safety rules.

“I think it just speaks to the drive that we have as journalists to get out there and witness what’s going on,” he said.