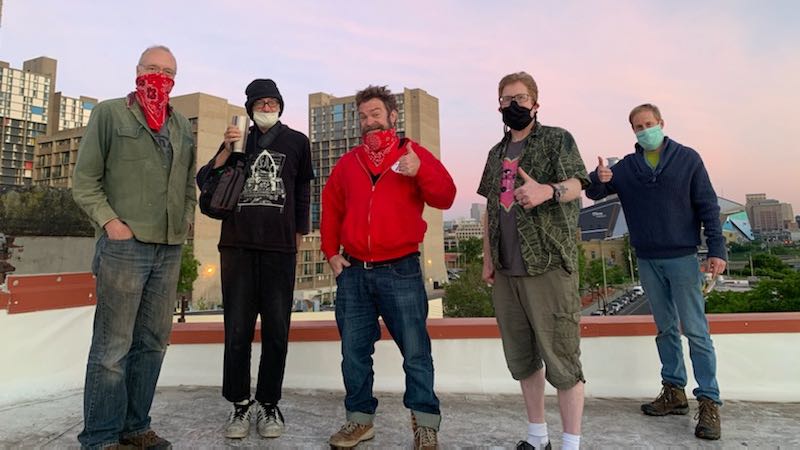 KFAI volunteers took to their building's roof to keep watch on their Minneapolis neighborhood.

The police killing of George Floyd and the subsequent social unrest in the Twin Cities area have hit home for community station KFAI-FM in a way that few public radio stations can relate to.

KFAI producers and management have been guarding the roof and street-level entrance of the station, headquartered in Minneapolis’ West Bank neighborhood, to prevent arson and pillaging of the building.

“On Friday it became very obvious that this is not just people expressing grief and anger at a police execution,” said Mason Butler, KFAI’s content manager and a morning host at the station. “This is people bent on destruction who are hiding within those ranks. As things escalated … it was obvious that they were trying to disenfranchise any low-income communities that they can. So, our protection was not so much for the radio station but for the neighborhood.”

The neighborhood, also known as Cedar-Riverside, is known for both its history as a home for artists and activists and, more recently, as an immigrant refuge with a large Somali population and a high-rise housing project, Riverside Plaza. KFAI is housed in the Bailey Building, a historic three-story structure.

Given the station’s decidedly left-leaning sympathies and its role as a platform for Minneapolis’ many ethnic communities, including Somalis, Eritreans and Hmong, it wouldn’t be expected to be a casualty of the protests. But as Butler points out, “If you’re going to be snuffing out grocery stores and pharmacies and post offices, why not any community hub?”

Butler put out a call on Facebook for volunteers to participate in a block watch around the station. On Friday and over the weekend, a group of 115 volunteers communicated via Telegram, an encrypted texting app, as they monitored an area of a five- or six-block radius. Participants included several on the building’s roof and several more outside the building, who were violating the city’s 8 p.m. curfew. A station administrator figured out how to monitor the building’s security cameras from home.

The hosts of KFAI’s heavy metal show, who were scheduled to go on at 2 a.m., came in before the curfew to help with the watch. Fearful of arson, Ryan Dawes, co-managing editor of KFAI’s Minneculture series, showed up with two fire extinguishers and a long pipe wrench for opening a fire hydrant. He had been reading social media posts offering advice on amateur firefighting.

Though no one knew exactly what a “block watch” was, “we knew it would be necessary,” Dawes said.

Dawes’ co-managing editor on KFAI’s Minneculture series, Melissa Olson, wasn’t involved in the on-the-ground efforts to protect the station. But she played a key role in rescuing a Native American audio archive KFAI is involved in preserving from the building housing it.

Olson, a member of the Leech Lake Band of Ojibwe, spoke with the website Indian Country Today on Friday about the fire and damage at Migizi Communications, a Minneapolis group dedicated to preserving Native American culture. Much of the group’s physical archive was damaged when the building caught fire during protests May 27, Olson said.

14 hours before the fire, Olson and her boyfriend loaded a van with several hundred hours of reel-to-reel audio recordings from the 1970s and ’80s of The Native American Program and First Person Radio, shows produced at KUOM, the University of Minnesota student-run station now known as Radio K.

“The interviews in the archive are just amazing,” Olson told Current. “A lot of American Indian Movement history. A lot of just really good, solid reporting.”

At first Olson and her boyfriend took the tapes to KFAI, but Olson said she concluded Friday that “it was an open question whether any building was safe.” She moved the recordings to her home.