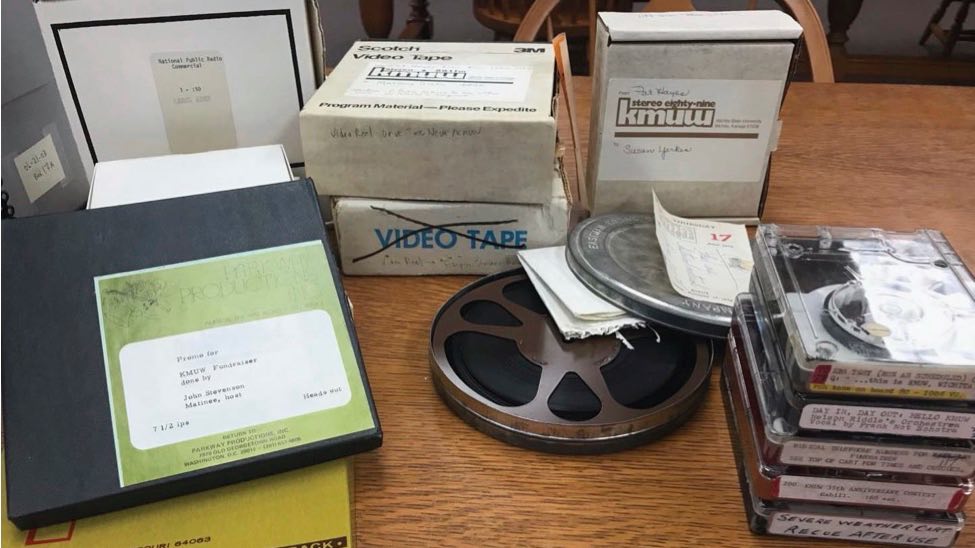 Materials from the archives of KMUW in Wichita will be digitized and added to the American Archive of Public Broadcasting.

Public broadcasting stations in Kansas and New Mexico are collaborating with the American Archive of Public Broadcasting on a new project to digitize their content.

The project is intended to increase the geographic diversity of AAPB’s collection, which does not currently represent Kansas and New Mexico. AAPB is the product of a collaboration between the Library of Congress and the WGBH Educational Foundation to preserve public media content that is at risk of being lost and to make it accessible for research.

AAPB will work with Kansas stations KMUW-FM in Wichita, High Plains Public Radio in Garden City, Kansas Public Radio in Lawrence, KRPS-FM in Pittsburg, KPTS-TV and KHCC-FM in Hutchinson, and Vietnamese Public Radio, which airs on a KMUW subcarrier. In New Mexico, the stations involved are KRWG-TV in Las Cruces, KENW-TV in Portales, and KANW-FM, KUNM-FM and New Mexico PBS in Albuquerque.

AAPB began by reaching out to stations in 12 states not included in its archive, according to Project Director Karen Cariani. The stations in Kansas received a $407,000 grant from the Council on Library and Information Resources; New Mexico broadcasters received $485,000 from CLIR. A station in Nebraska applied for a smaller grant but did not receive funding.

Cariani said the collaborations among the stations in Kansas and New Mexico probably helped them get funding. They allowed the stations to “go for a larger grant and create a larger footprint in the AAPB as a … regional collaboration,” she said.

The project is expected to span from 18 months to two years. Both groups of stations are using funding from the grant to hire on-site project managers to direct the collection and preservation of their content. Applications for the positions are available on KMUW’s website and NMPBS’s website.

A project manager at AAPB will also guide stations through the process. The digitized content will be accessible through AAPB’s digital archive and preserved in the Library of Congress.

The scope of each project is determined by how much content can be digitized with the available funds. According to Cariani, the stations in Kansas have projected they will collect over 2,000 hours of programming, and New Mexico stations projected about 9,000 hours.

The stations largely decide which content to prioritize for preservation, but AAPB does advise on which content might appeal to funders. The archive is especially interested in content that shows a “unique view of what that state, region, locality is like,” said Alan Gevinson, project director for the AAPB at the Library of Congress.

In Kansas, AAPB first reached out to KMUW. GM Debra Fraser, also chair of the Kansas Public Broadcasting Council, wanted to provide more opportunities for partnerships among stations in the state. She reached out to other stations to coordinate efforts.

“We can make sure all the parts of Kansas are included,” said Fraser. “Wichita is the biggest city in Kansas, so it doesn’t seem like it would really be representative of the whole state. There are stations in smaller communities that I felt should be included.”

Being a part of the Kansas Public Broadcasting Council made the collaboration possible, said Fraser, who hopes other parts of the country will follow her state’s example.

“Hopefully this will be used as a model for other areas, whether it be a state or a particular region, that deserve to be heard and deserve to have representation,” said Fraser.

Fraser said Kansas stations will need to discuss what to prioritize but that editorial decisions will probably be left to station GMs. She said their primary focus will be on material covering subjects such as women’s suffrage, civil rights and the “cultural aspect of what made Kansas what it is today.”

Public broadcasters in New Mexico have a long-running collaborative spirit and felt this partnership would add value to their archiving effort, said Franz Joachim, GM of New Mexico PBS.

“If we could include a much more comprehensive look at both public television, radio and public media as a whole in New Mexico, it’d be a much stronger case,” said Joachim.

New Mexico PBS has already taken inventory of their highest-priority content and plan on preserving all they can, Joachim said. They will focus on eliminating redundant pieces of content, which he said will remove a few thousand of their existing assets.

Preserving public broadcasting content in New Mexico will protect the unique history captured in the materials, Joachim said. Their collection includes interviews with state leaders who are no longer alive and pieces on Native American cultural ceremonies that have since become more difficult for the public to view.

“If you don’t take a step like this, how else are you going to preserve it?” said Joachim.