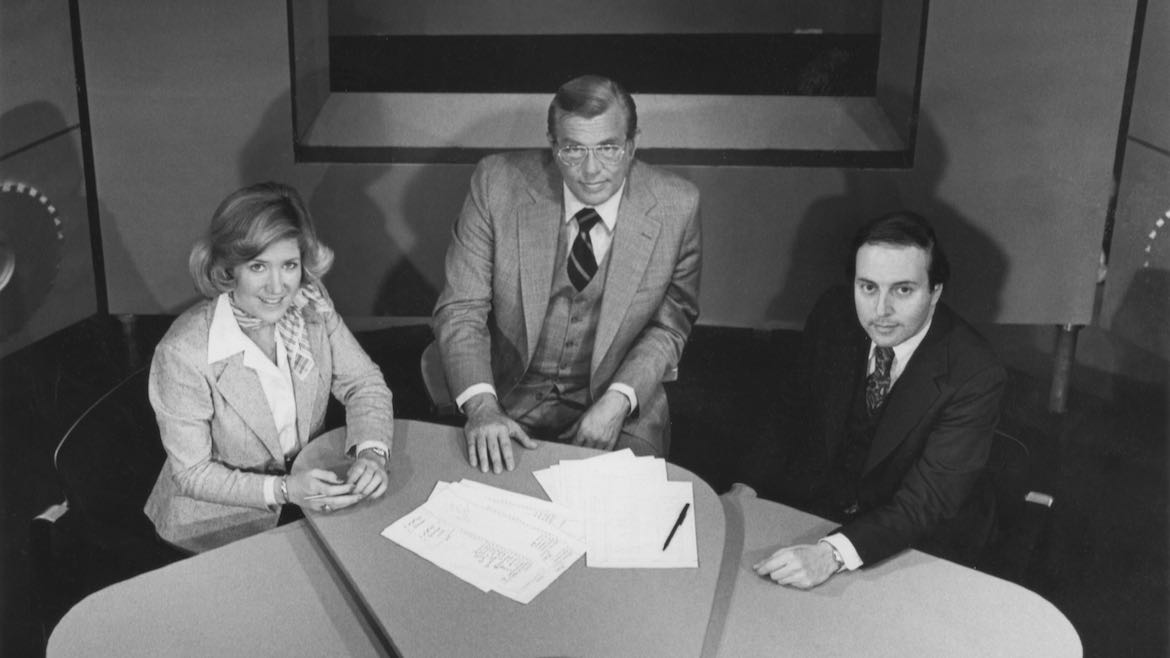 Linda O'Bryon, Paul Kangas and Merwin Sigale on the set in 1979 when "NBR" launched locally on WPBT.

On Friday, Dec. 27, the final chapter closes on Nightly Business Report, the weeknightly series that invented daily business news coverage not just on public television but for all of television.

Presenting station WETA in Washington, D.C., announced last month that CNBC, owner of the series, had decided to end production. Its cancellation brings an end to a 40-year run on public TV. As someone involved in its creation, this brings back a flood of memories from a time when the media landscape was vastly different from today.

I’ve been reflecting on NBR’s long history and its startup during the early years of public broadcasting. We identified an audience need and created a program that uniquely informed and educated viewers across the country for decades. This could have only happened in public media, where support from stations and viewers, and advances in technology, aligned to make it possible.

With NBR, a small team at WBPT in Miami pioneered the genre of daily business news coverage on television. We launched the program Jan. 22, 1979, as a 15-minute news summary of local and national business news. At that time, there was no CNN or CNBC, no satellite television or broadband internet access. People who followed stocks or tracked business trends had to rely on their morning newspapers to find out what had happened on Wall Street the previous day.

From our newsroom in Miami, we used typewriters and carbon paper to create scripts for the program. We wrote the rundown each night on a white board in the back of the newsroom. We had limited access to the AP wire service, so every day we phoned trusted financial sources to collect additional closing market data.

I was privileged to work on NBR from the start at WPBT, the program’s original producing station.  Several members of the station’s board, including James McLamore, the co-founder of Burger King, came up with the idea of creating a daily business news program and pitched it to George Dooley, then-president of the station.  As astute business leaders, they all realized a need for this type of program.

As WPBT’s news director at the time, I was asked to work up a concept for the program.  I drafted a two-page typed memo for the senior programming executive, John Felton. Senior management gave it the green light.

WPBT had produced local and national programs, but we had never undertaken a daily program. The rigorous deadlines and constant work flow challenged every single department — from production to engineering.  A small team of staff produced a pilot of the program every night for a month before the 15-minute version debuted on WPBT. Financial commentator Paul Kangas was involved from the very beginning.  His larger-than-life personality made business news anything but boring.

In those early days, we broke all the television rules to create a program that experts outside of public broadcasting said would not work. Business news was “too dull for television,” they said. The naysayers also reminded us that the nation already had The Wall Street Journal. And, they asked, how could anyone produce a business news program based in Miami anyway?

Our group of dedicated staff members set out to prove them wrong. And we did. One reporter later would call NBR “the little engine that could.”

The notion of a business news program delivering stock quotes, business news and analysis just two and a half-hours after the closing market bell resonated with millions of viewers.

After six months on WPBT, NBR grew into a half-hour weeknightly program. By 1981, the series went into national syndication.  Interregional Program Service, the public media network that later became known as American Public Television, distributed the series. IPS President John Porter had visited Miami to watch us produce the live broadcast, and he immediately recognized how NBR could be crafted for a national audience. He encouraged us to expand our concept and offer the program to stations across the country.

NBR was devoted to a topic that was far from the mainstream of the time, and station leaders in major markets took risks in picking it up. The program debuted nationally on 125 public stations in October 1981. Carriage expanded very quickly to more than 250 stations.

How could a little-known series that originated from Miami grow into the most widely-watched program of its kind, and maintain that enviable position for decades?

I see four characteristics in public television and media technology of that time that helped open NBR’s path to audience success and longevity:

1. Early support from public television stations and programmers — A weeknightly show devoted to business news would have never made it past the pitch stage in commercial broadcast television, where the concept of creating programs for a niche audience wasn’t considered viable program strategy. Yet public TV stations already knew that shows for underserved audiences could work well. By the late 1970s, public television had built a large audience of preschool children with its educational programs Sesame Street and Mister Rogers Neighborhood. Following the success of The French Chef, featuring Julia Child, stations recognized that series devoted to specialized topics could be very powerful in attracting viewers. Public stations had to “vote” with their limited programming dollars to syndicate NBR through IPS, and local programmers supported it from the start.

A number of stations also served as NBR “bureaus” by assigning their reporters to produce segments periodically for NBR. Their coverage provided the program with a true national footprint, while showcasing local stories that would otherwise never reach a national audience. Stations in Kansas City, San Diego, Houston, Cleveland and other cities stepped up and provided much needed resources for the program.  In later years, NBR would take a crew on the road, and dedicate a week of coverage to cities such as Chicago, Portland, Philadelphia and Cleveland.  Stations provided production support for the remote, live broadcasts, and hosted events with their donors to welcome the NBR crew. With this coverage, NBR presented fascinating stories about business news and trends far away from the daily drumbeat of Wall Street.

2. Reduced costs of national distribution — In 1978, when PBS became the first network to adopt satellite delivery in a big way, we no longer had to pay for the old and very expensive AT&T landlines. Without satellite technology, a daily news program, which relied on access to a network of bureaus and correspondents, could not have made it on public television’s limited budgets.

3. Emergence of electronic graphic systems — These production technologies, which were becoming available when NBR went national, made it possible to visualize complex business concepts, which are not intrinsically visual, for television.  A segment on a merger or acquisition would come alive on screen with moving graphics showing company logos. Without the graphics, it would have been tough to create compelling visuals.

4. Response to audience needs — Most importantly, NBR’s reporting on business and finance filled an important gap in broadcast news coverage across the country. No other program on television covered business and finance in the way that we did. We frequently heard from viewers who said they depended on our series for their own personal finance or investment decisions. I still run in to viewers who say they learned about personal finance and how to invest for education, retirement and other needs from NBR.

For nine years, the global news organization, Reuters, was our editorial and production partner. At the program’s peak, NBR drew reporting from bureaus in London, Tokyo, New York, Washington, Chicago, Los Angeles and other media centers. Regular commentators included economists and analysts Alan Greenspan (before he became chair of the Federal Reserve Board), Art Laffer, Alfred Kahn and Charles Schultze, among many others.

I resigned from NBR and WPBT in 2006 to become chief content officer at KQED in San Francisco. It was difficult to say goodbye to so many colleagues, but I knew I left NBR in very capable editorial hands. I worked from afar to support the program, and I was proud that we were able to establish a West Coast bureau at KQED for a brief time.

In 2010, WPBT sold NBR to a privately held company. The production went through another ownership change before CNBC began producing NBR for public television in 2013.  Along with APT and WETA, CNBC has done fine work bringing this series to public television viewers and keeping the sensibility and mission consistent with the original program. Veteran anchors Bill Griffeth and Sue Herera, along with their colleagues at CNBC, have brought additional worldwide resources to the production.

Times have changed, and there are many ways viewers can access business news — via smartphones or the several cable TV channels dedicated to reporting business news around the clock.

It’s heartening to know that our original concept for business news on television started as a homegrown offering of a local public station. We didn’t have a network-scale budget of R&D funds and investments. With an idea and very limited resources, the show took off and kept going five nights a week, 52 weeks a year for more than 40 years.

Its staying power is a tribute to a dedicated team at WPBT and the public television stations that took risks with it in those early years. NBR took root locally and grew on our mighty belief in public television’s power to make a difference in the lives of Americans.

In addition to her roles with NBR and KQED, Linda O’Bryon was president of South Carolina ETV from 2010 to 2017. She received a Lifetime Achievement Emmy in business and financial reporting from the National Academy of Television Arts and Sciences in 2009. She now operates her own company, O’Bryon Media LLC.