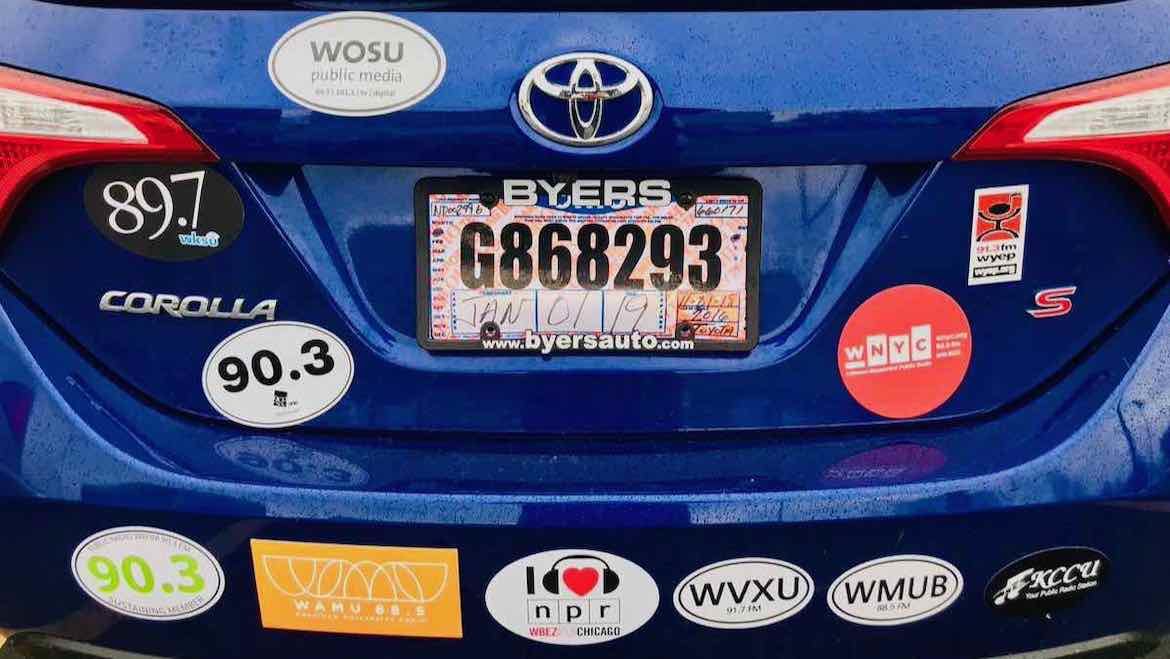 The holidays are as good a time as any to be reminded of the kindness of strangers — though honestly, I’d have preferred not to sacrifice my car in the process.

I’d never owned any vehicle larger than a bike before moving to Columbus, Ohio, for my job at WOSU Public Media. My dad’s old Subaru Forester broke down after just a year, during a trip home for Thanksgiving, essentially stranding me in Pittsburgh until I could find a new ride. That weekend, I upgraded to a slightly less-used Honda Civic — heated seats, moonroof, the dream.

It was a big moment, and to celebrate the purchase, I immediately did what any kid raised on public radio would do: decorate it with bumper stickers. I began with one from my own station, then added another from WYEP in Pittsburgh, the station where I completed my first-ever internship. Friends at WVXU in Cincinnati were more than happy to send theirs, too.

Grand ambitions started forming: What if I could decorate my car with every station that’s important to me? It would be obnoxious, sure, but charmingly so — I’d be representing public media wherever I drove.

That goal was only half-formed by the time my birthday rolled around in October 2018. A normal weekday, I showed up to the office to find my friend and co-worker Paige had called in sick. Columbus was having a light news day, and Paige lived around the corner, so at lunchtime I drove to her apartment with an offering of Gatorade, Saltines and cold medicine. I parked on the street, right in front of the steps.

Just moments later, from her living room, we heard a crash and the screeching of metal on pavement. I walked slowly to the street, but part of me already knew what I’d find.

A pickup truck had collided into my car, almost straight-on, in broad daylight. Fully sober and conscious, the driver had been trying to pass another car and at 40 miles an hour met the trunk of my bright white Civic in the parking lane.

I was lucky to be several feet away at that moment, as everyone told me that day. The other driver seemed shaken, with a bit of whiplash, but otherwise unhurt. Couldn’t say the same for either car.

So no, not my best birthday on record. I spent the next few weeks dealing with insurance, getting lifts from friends and searching dealerships in the area. After appraisers deemed my car beyond repair, I test-drove new vehicle after new vehicle. But I couldn’t shake the sense that I’d lost something I wouldn’t be able to replace.

In the end, the winner was a used blue Toyota Corolla, an agreeable purchase despite its conspicuous lack of moonroof or heated seats (I’d survive). It lacked something else, too: those public radio bumper stickers I so carefully collected. They’d been destroyed in the crash, along with the entire back bumper and a bit of my spirit.

But I didn’t have to let that accident destroy my dreams — specifically, my dream of covering my car with a ridiculous amount of bumper stickers.

I decided to appeal to Twitter, which, for all its flaws, loves a valiant quest. I put out the call: Help me honor my Honda by collecting bumper stickers from every public radio station in the country.

My fellow Ohio stations — ideastream, WKSU and WVXU — responded first. Friends at NPR HQ were sympathetic to my plight as well. My call spread far and wide. Less than a month after I got my new car, stickers began arriving from Cleveland and Washington, D.C., New York City and Pittsburgh, Chicago and Lawton, Okla.

I was blown away. Not only were station employees so quick to respond, so eager to add their call letters to my sedan, but from places where they’d never be able to see it in person! Stations that, hard as you tried, you wouldn’t find on the dial in Ohio.

My Corolla is less a car now than a mobile museum, with my collection up to 26. I love seeing how more stations are getting creative with their logos, from the bright and beautiful (Hawaii Public Radio) to the goofy (KPCW from Park City, Utah) to the simply elegant (Wyoming Public Radio). Some stations riff on pop culture (WYEP’s take on a Campbell’s soup can), while others outfit their stickers with inside jokes (“Stan with the fax” from St. Louis Public Radio).

It’s quite the conversation starter too — even if that conversation is, “So do you work in radio or something?”

But mostly, I’m grateful. We in public media often like to talk about how we’re all part of a family, and most of the time, it’s just marketing. I’ve seen how people respond in moments of crisis, though, and Mr. Rogers would be proud: There are a lot of helpers among us.

I’m proud I get to show off that generosity, in my own oddball way. Like my car, or public media as a whole, it’s not something I plan to take for granted.

(P.S. If you want to send me a bumper sticker from your own station, there’s still plenty of room left on my car — email me!)

Gabe Rosenberg is digital news editor at WOSU Public Media in Columbus, Ohio. You can find him making puns and music recommendations on Twitter at @gabrieljr.

2 thoughts on “A quest for public radio bumper stickers: ‘My Corolla is less a car now than a mobile museum’”