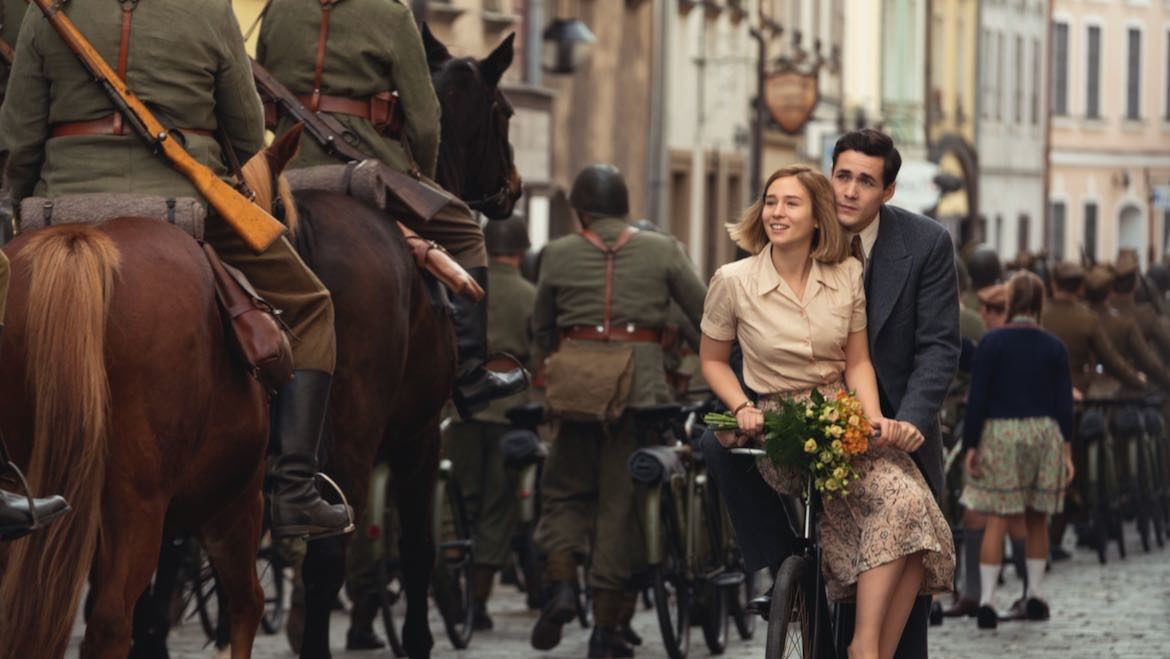 When screenwriter Peter Bowker decided to dramatize World War II, he looked at it through the prism of ordinary people whose otherwise ordinary lives had been overtaken by global events far beyond their control.

Though they lived in England, France, Poland and Germany, he imagined that, in unexpected ways, their lives had become intertwined.

The result was World on Fire, a seven-part Masterpiece scheduled for broadcast next spring.

You might think Bowker, 61, would have been influenced by such celebrated 1980s miniseries as Winds of War and its sequel, War and Remembrance, based on sprawling novels by Herman Wouk. But despite some similarities to those epic stories, his biggest inspiration was a 26-episode BBC documentary series, The World at War, broadcast in 1973 and 1974 and narrated by Laurence Olivier.

That landmark series examined the entirety of the war from military and civilian perspectives around the globe. Bowker challenged himself to create a drama with similar sweep and diverse points of reference.

His previous creations included the musical drama Blackpool (2004) and the subsequent CBS adaptation, Viva Laughlin. His 2009 series, Occupation, followed three military servicemen after their tours of duty in Iraq. Desperate Romantics (2009) was about the pre-Raphaelites. He has written an adaptation of Emily Bronte’s Wuthering Heights (2009) and a play, Flesh and Blood (2002), about sex and disability.

“He’s a varied guy, and his stories are character-driven,” said Masterpiece EP Rebecca Eaton. “But he’s also interested in big ideas. This gave him the opportunity to create a whole roomful of very distinct characters.”

Eaton first learned of the project from one of her regular conversations with Damien Timmer, managing director of Mammoth Screen. The company has produced several Masterpiece series, including Poldark, Endeavour and Victoria.

Timmer arranged for Eaton to meet Bowker in London in the summer of 2018. “He pretty much acted out six years of World War II. He described his intention to do this series from the individual’s point of view,” she said.

Eaton was impressed, though there were still other elements to be considered, including casting, directing and, of course, negotiating a price. “I think they very much wanted it to be on PBS,” she said. “As soon as we showed serious interest, they agreed to just talk to us exclusively.”

Masterpiece does not reveal the amount it pays for productions but, Eaton said, “I would say this isn’t cheap.”

The extent to which Masterpiece gets involved with actual production can vary. “In this case, there was a lot of trust,” Eaton said. “My feeling as an executive producer and as a minority partner is to give them the money, keep an eye on it but then get out of the way and allow them to fulfill the vision. That’s generally how we do it, but very much so with Mammoth because of what they’ve done.”

The three characters at the heart of the show are Harry Chase (Jonah Hauer-King of Little Women), a young English translator in Warsaw; Lois Bennett (Julia Brown of The Last Kingdom), his girlfriend at home; and Kasia Tomaszeski (Zofia Wichlacz), the Polish waitress with whom he falls in love and then tries to spirit out of the country.

Others in the cast include Helen Hunt (Mad About You), who plays Nancy Campbell, an American radio correspondent and the glue holding many of the other stories together. Lesley Manville (Midsomer Murders) plays Robina Chase, Harry’s domineering mother.

Sean Bean (Game of Thrones and Inspector Morse) plays Lois’ father, Douglas Bennett, a conscientious objector during World War I who is shellshocked from his service in a non-combat role. The character is modeled to an extent on Bowker’s own grandfather, a bus driver whose experiences in World War I, including a mustard gas attack, caused a condition now referred to as PTSD.

While all characters are fictional, Bowker conducted extensive research at London’s Imperial War Museum to learn more about the concerns of people at that time, from the trivial to the aspirational. At the museum, he discovered a trove of diaries written as part of a project to encourage people to record their feelings.

Bowker told a group of journalists that he asked the museum if there were diaries about Polish life during the war. “Within a couple of days, they found me two translated diaries of young women, one of whom was a waitress working in Warsaw,” he said.

Helen Ziegler, an EP for Mammoth, said Bowker was searching for a common humanity. “What he does and what he evokes is the idea of what it would be like for a Harry and a Kasia to be falling in love with the world as their oyster and then the bombs start to fall,” she said.

“Pete was fascinated by the questions — Do you stay? Do you run? Do you hide or do you fight? Not putting judgment on that, but just asking the question,” Ziegler said.

Although there’s no intention to deliver a history lesson, each of the seven episodes is organized around a significant event during the first year of the war. These include the invasion of Poland, the evacuation at Dunkirk, the fall of Paris and the start of the Battle of Britain.

“There are many more stories to tell,” Ziegler said. “I know Peter has planned where the characters go and what they end up doing throughout the war.”

The BBC began broadcasting the series in October and has not yet announced a decision about additional seasons.

“So far, so good in terms of how it’s going in the U.K.,” Eaton said. “Hopefully, we’ll all know in the next few months and definitely before we air in the spring.”