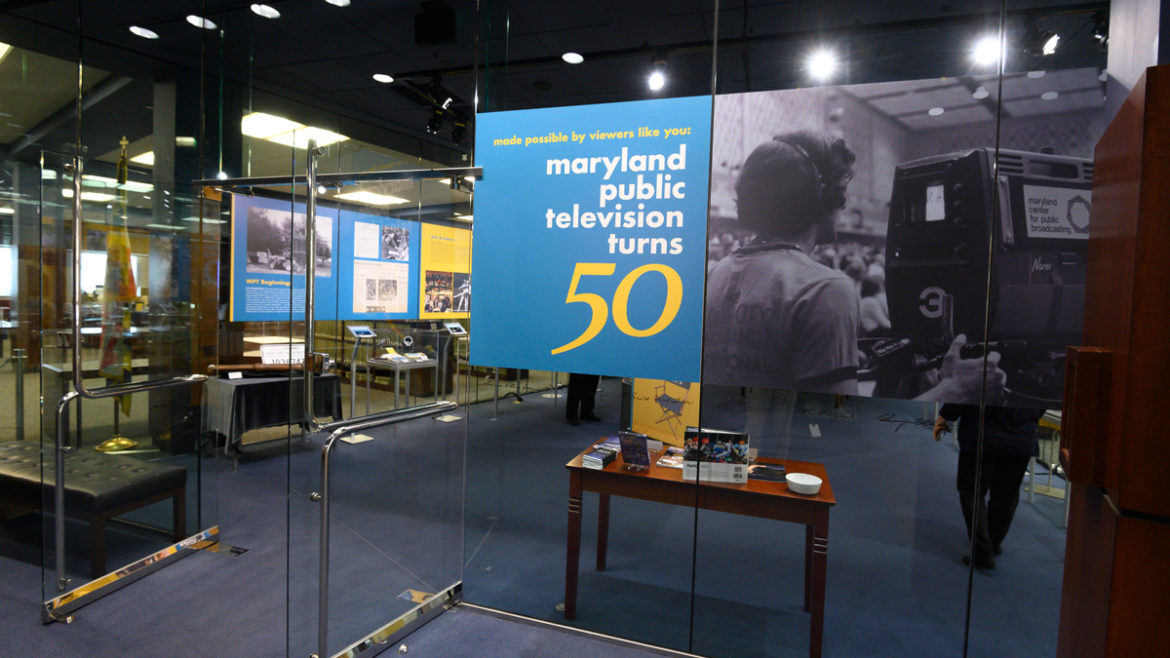 COLLEGE PARK, Md. — An exhibit at the University of Maryland is celebrating the 50-year anniversary of Maryland Public Television with artifacts and archival videos that guide visitors through the network’s history.

The exhibit, titled “Made Possible by Viewers Like You: Maryland Public Television Turns 50,” includes magnetic tapes, studio lights and a camera of the same style MPT used when it began broadcasting in 1969. Black-and-white photographs line the glass walls of the exhibition hall in the Hornbake Library on UMD’s College Park campus. A 14-minute video of historic moments in MPT’s programming begins playing as visitors step closer to observe the artifacts.

The video starts with a boisterous clip from Crabs, an MPT sketch comedy show whose inclusion shows how the network has highlighted content about its home state. Clips that follow include a cooking lesson from Chesapeake Bay Cooking with John Shields, a striking monologue from an actress portraying Harriet Tubman in the 1987 movie Freedom Station, and a broadcast from State Circle, which covers local issues.

Picking the best clips to include in the video was one of the most challenging parts of creating the exhibit, said Laura Schnitker, curator of the exhibit and curator of Mass Media & Culture in Special Collections at the University of Maryland Libraries.

Documents and memorabilia help tell the network’s story, Schnitker said, but the exhibit would be incomplete if visitors couldn’t see the programs.

“Otherwise, it’s just abstract, and you’re asking people to imagine what this show might have looked like,” said Schnitker, who oversees the National Public Broadcasting Archives. “It’s just so much more interesting to bring it to life.”

Schnitker said she also thought it was important to showcase MPT’s history by including older studio technology in the exhibit, which can help educate visitors about behind-the-scenes production work at the station.

“One of my first ideas was to try to bring in some of that old equipment because if you’ve never visited a public television studio, you really have no idea just how much technology goes into producing,” Schnitker said.

The exhibit’s creators say they hope the display encourages visitors to recognize the network’s value to the community and support MPT. “You have to know that something’s there in order to know that it’s available for you,” said George Beneman, senior VP and CTO at MPT.

“I would hope that when someone sees this … it strikes their curiosity,” said Beneman, who helped to choose the exhibit’s content.

The exhibit is also part of a larger effort to make MPT’s archives more accessible to the general public and network staff. Archives show “where you’ve been, what you’ve done,” said Beneman, allowing the station to learn from its past. Using MPT’s archives could also help station producers understand broad trends in media.

But in its earlier years, MPT focused less on preserving its history, and preserving its archives has become more difficult as older media formats fall out of use. The station is now looking to digitizing more content from its magnetic tapes and other antiquated media.

To that end, MPT and UMD have collaborated to create the Maryland Public Television Preservation Fund, which aims to provide resources for the three-person team at the university that is expanding MPT’s archives.

The MPT exhibit opened in September and will be on display through July 2020. Some clips can be viewed in the university’s digital collection of MPT’s work. MPT is considering creating a separate exhibit at its headquarters in Owings Mills after the UMD exhibit closes.