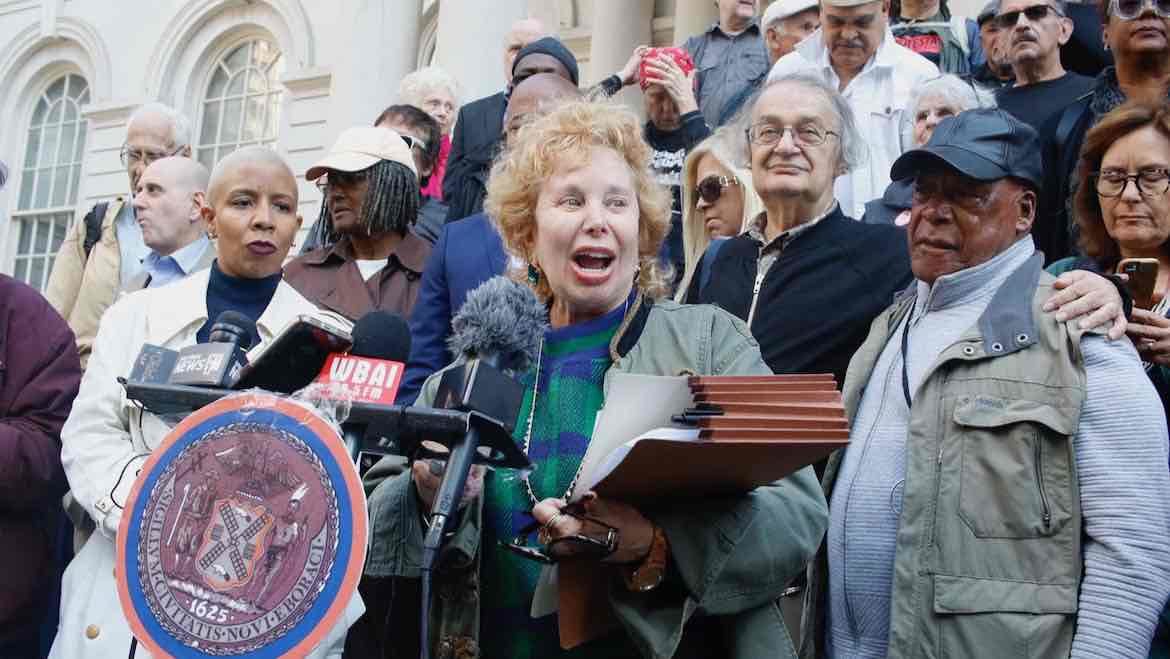 NEW YORK — Local hosts have regained access to studios at Pacifica’s WBAI but remain off the air, with control of the station subject to a pending legal dispute that is dividing the network’s board of directors.

Dueling factions of the board both claim that the opposing side has misinterpreted the foundation’s bylaws. Their legal tussle has gone from state court to federal court and back to state court, with a federal judge urging the two sides to reach a deal.

District Judge Paul A. Engelmeyer offered a word of advice to the parties Monday after sending the case back to state court, ruling that he did not have jurisdiction to hear it.

“This is one of those cases where justice delayed is justice denied,” Engelmeyer told the packed courtroom. He encouraged the two sides to reach a settlement. Waiting for a court to rule could take too long, harming employees and listeners in the process, he said.

Arthur Schwartz, a WBAI host who is also acting as the station’s lawyer, said he is open to a settlement but that it would not be easy.

“The animosity between the two sides is really thick,” he told Current. “When I even say the word ‘settle,’ I get moans and groans.”

The battle began Oct. 7 when Pacifica abruptly shut down operations at WBAI’s Brooklyn studios. The network’s national leadership laid off staff and replaced WBAI’s FM broadcast and web stream with a feed of programs from Pacifica stations and other sources.

Immediately following the layoffs, a group of station supporters that includes producers and the chair of WBAI’s board filed a petition in state court, claiming that the layoffs were illegal because Pacifica Interim Executive Director John Vernile acted without a vote by the foundation’s board of directors. They won a temporary restraining order Oct. 7 barring Pacifica from laying off WBAI’s staff and changing the station’s programming.

Though staff has regained access to the station, local programming remains off the air. Twelve of Pacifica’s 22 board members passed a slew of motions Oct. 13 to reverse the layoffs, but a temporary restraining order issued by a federal judge two days later barred the WBAI petitioners from implementing the motions. Pacifica argued that the meeting was illegal because it violated the foundation’s bylaws.

‘A layoff needed to occur’

The legal dispute hinges on who has the power to make decisions about WBAI under Pacifica’s bylaws. But the underlying disagreements run much deeper, with competing narratives of why the layoffs occurred. While Pacifica’s leadership argues that the layoffs were a necessary response to the station’s poor financial condition, WBAI staff and supporters say the move was a coup meant to silence the iconic station’s radical voices.

According to John Vernile, who took over as interim director in August, the layoffs were a necessary financial decision to address a “spiraling cash flow crisis” at the foundation.

Shortly after taking the job, Vernile met with WBAI staff and volunteers as part of a tour of Pacifica’s five stations. “I determined that in my nearly forty years in the media business, I had never seen a major market station in worse shape,” he wrote in court documents. The station suffered from low ratings and poor finances, he said, and Pacifica was using its own cash reserves and reserves of its other stations to cover WBAI’s payroll and other costs.

Vernile told the court that he felt he “could not morally or legally” keep on staff that the foundation could not pay for. “The handbook is clear on this point, that if funds are not available for payroll then a layoff must immediately occur,” Vernile wrote. “There was no way we could fund WBAI payroll. A layoff needed to occur.”

“WBAI has never ceased broadcasting. … We simply no longer broadcast the programming of the employees we unfortunately had to lay off.”

WBAI’s supporters conceded in court documents that the station has been running at a deficit but said deficits have been decreasing and that the shutdown interrupted a fund drive that was generating “record sums of contributions.” They argue that Pacifica’s financial arguments are a red herring and that the layoffs were part of a larger effort to silence the station’s politically radical hosts.

The station aired a promotional piece in August in which volunteer producer Mimi Rosenberg used the phrase “Stop Trump” while talking about national immigration policy. Pacifica staff, worried that the phrase would endanger the station’s FCC license, demanded that it be taken off the air and that Rosenberg pre-tape her shows, according to court documents filed by WBAI.

In a Sept. 27 written warning to WBAI Station Manager Berthold Reimers, Vernile called the promotional piece a “compliance violation.” “Advocating for and lobbying for political candidates on WBAI’s air endangers WBAI/Pacifica’s IRS and NY state charity status and FCC license and will not be tolerated,” Vernile wrote.

The layoffs came shortly after Reimers refused to pre-tape Rosenberg’s shows, according to WBAI’s complaint.

WBAI contended in court that Pacifica’s bylaws do not give the foundation’s executive director the power to “seize a radio station.” Pacifica leadership argues that the layoffs did not constitute a seizure because Pacifica owns WBAI’s equipment, space and FCC license.

“WBAI has never ceased broadcasting,” Vernile said in court documents. “Pacifica National programming is now broadcast on our license WBAI. We simply no longer broadcast the programming of the employees we unfortunately had to lay off.”

‘We are not going to allow WBAI to fall’

WBAI producers who held a rally for the station outside of New York’s City Hall Oct. 15 called the shutdown a “rogue effort to destroy WBAI.” Dozens of supporters took to the microphone to express their support for the 60-year-old station, which they said they consider to be the lifeblood of radical activism in New York.

Rosenberg described the relationship between WBAI and the Pacifica Foundation as a “covenant” in which the foundation is expected to preserve the radio station in perpetuity. “John Vernile was brought on board as part of a plan to steal our station,” she said, calling the recent layoffs a “hijacking” of local administrative control.

New York City Council Majority Leader Laurie A. Cumbo and Brooklyn Borough President Eric L. Adams, both prominent progressive politicians in the city, spoke about the role that WBAI played during their childhoods in the city.

“You came home, and this is what was on the airwaves,” said Cumbo. “And it helped to shape and construct who I am.”

The Democratic officials also framed WBAI’s shutdown as part of a larger attack on radical activism and independent media in the United States.

“There is a movement to destroy independent communications across this entire country, and this has become ground zero,” said Adams. “We’re about to fight to keep this station alive.”

“We are not going to allow WBAI to fall,” said Cumbo, who called the shutdown an act of gentrification. “This voice, this access to information, is so critical for each and every one of us, and if we want to talk about a progressive New York City, we cannot be progressive if ideas that are progressive have no place to live, to flourish, or to be disseminated.”

Another hearing in the legal dispute will be held Friday in state court.

“The big issue is that the station has been off the air for almost three weeks,” Schwartz told Current. “And rebuilding a listener base, people who are willing to give contributions, will be hard.”