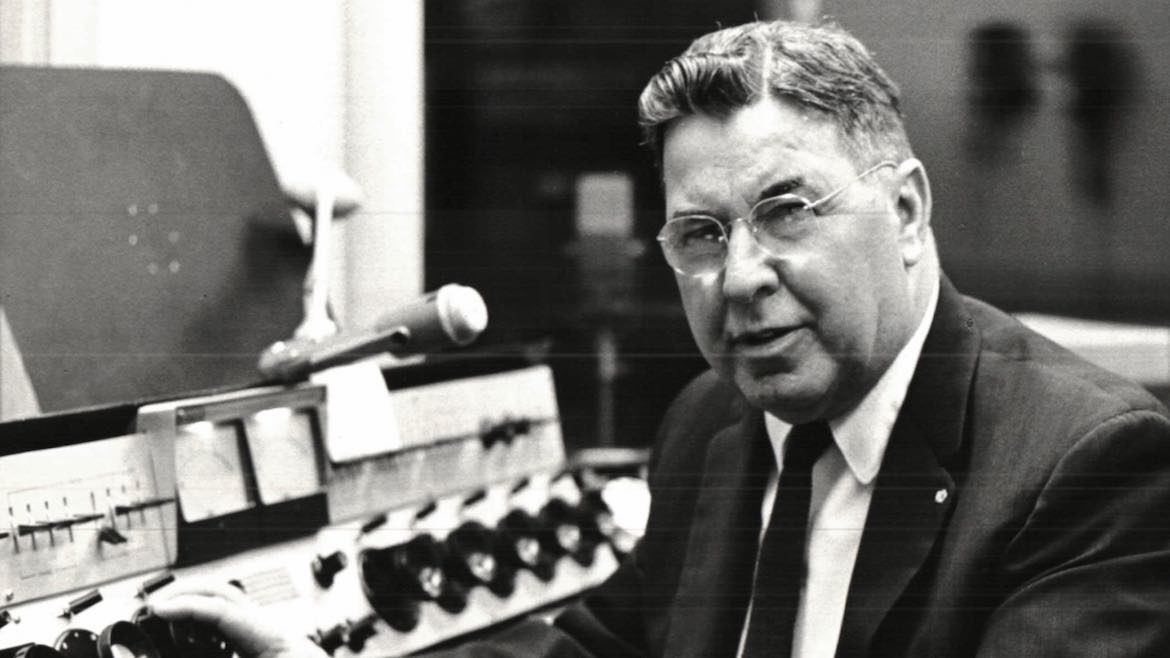 Clarence Morgan in the Indiana State University studios he designed ca. 1968, one year before he retired.

Sesame Street has been around for 50 years, but the show’s strategy of combining entertainment and education has roots in educational programming produced decades earlier. During the Golden Age of Radio, Clarence “Doc” Morgan, the “Hoosier Schoolmaster of the Air,” pioneered a strategy based in entertainment and education for live radio programs broadcast on commercial radio by Indiana State Teachers College. This spawned unique children’s educational radio programs, custom sound effects equipment, an innovative studio design allowing audience viewing, and a virtually unmatched 90-year program of educational broadcasting on which Indiana State University’s award-winning student media stands.

Prior to World War II, radio programs primarily entertained or educated listeners. Few combined both. The prevalence of adventure serials such as Jack Armstrong and Buck Rogers caused a good deal of parental concern during this time. Children were drawn to the shows’ exciting plots and cliffhanger endings, while parents objected to the depictions of violence.

At the same time, advertisers realized the power of product sponsorships. Children began to associate products with programs and became viewed by advertisers as “indirect consumers.” This resulted in a good deal of discussion and research regarding the effect of children’s radio programs on young listeners.

In this context, Indiana State Teachers College — now Indiana State University — asked Clarence M. Morgan, a young English teacher, to build a radio division in the fall of 1934. Born into a coal-mining family on July 4, 1903, radio fascinated Morgan. Like many young men of the day, he built his first radio receiver by “borrowing” an oatmeal canister from his mother. With her encouragement, he pursued a college education and become a teacher.

As a Rector Scholar at DePauw University in 1923, Morgan was still dabbling in radio as a hobby. He received his first broadcasting license, signed by then–Secretary of Commerce Herbert Hoover and notarized by Morgan’s father. He and two college friends were assigned the call letters 9YJ and began broadcasting local sporting events.

After graduating from DePauw, Morgan began teaching at his former high school in his hometown of Linton, Ind., before pursuing a master’s degree from Indiana State Teachers College in Terre Haute. As one of many Teachers’ Colleges, ISTC’s primary goal was to train teachers for all levels of classroom instruction.

Morgan taught in ISTC’s Laboratory School as a graduate student. After graduation, he began full-time employment teaching English at ISTC. A year later, Morgan took a leave of absence to pursue his doctorate in education at Indiana University in Bloomington. During his time there, Clarence met his future wife, Ruth Laura Holaday, who worked in the history department as a graduate teaching assistant. Upon completing his course work in the fall of 1933, Morgan returned to ISTC to continue teaching English, work on his dissertation and plan his future with Holaday. They married on Thanksgiving Day, Nov. 30, 1933.

Radio broadcasting was a burgeoning field in the early 1930s. Morgan’s fascination with radio parallels its rise as an educational broadcasting medium. It also propelled him into his career as a radio broadcasting educator. He accepted ISTC’s offer to return and create a radio division, becoming director of radio activities. Known as “Doc” to his students, Morgan implemented multiple innovations, including designing sound-effects equipment, such as a wooden tool to make the sound of men marching in formation.

He also created a unique studio design that allowed audiences to view live radio programs; held annual clinics to teach fellow educators radio techniques; and implemented a strategy of radio broadcasting based on his belief that radio could be an educational tool for the broadcasters themselves as well as the listeners.

Morgan took the moniker “the Hoosier Schoolmaster of the Air.” In a cooperative partnership with Terre Haute commercial AM station WBOW, the live programs reached listeners “under the personal supervision of the Hoosier Schoolmaster of the Air.” Every broadcast targeted a different age group through three types of radio broadcasts. Educational broadcasts supplemented the curriculum of 125 public schools in the Wabash Valley, the “Wabash Valley High School Series” showcased area public high schools, and special feature broadcasts covered everything else, such as sportscasting, variety shows and curriculum topics such as science and social studies.

Each show ranged from 15 minutes to one hour in length and reached an estimated 60,000–120,000 listeners. At the height of its success, ISTC’s Radio Division broadcast 18 live shows each week created and performed by students. Morgan took ISTC from training future teachers of broadcasting to also producing future radio broadcasters.

Morgan succeeded by implementing experiential learning, which involves classroom lecturing and real-world application. His students applied what they learned in the classroom by writing radio scripts, practicing techniques and performing live programs. The combination of experiential learning and Morgan’s unique educational broadcasting strategy brought continual national attention. Trade magazine Radio Daily said in 1937 that ISTC was a “pioneer in radio education,” while U. S. Commissioner of Education John W. Studebaker mentioned ISTC as one of only two universities in the U.S. with “praiseworthy” educational programs during a keynote speech at a radio education conference in 1938.

Radio scholar Dr. Carroll Atkinson wrote in his 1940 work Broadcasting to the Classroom by Colleges and Universities that ISTC has “probably the most frequent use of broadcasting facilities of a single commercial station, WBOW, by any educational institution in the U. S.” And in 1942, trade magazine Broadcasting reported that ISTC was the only Teachers’ College in the U.S. to offer more than seven radio courses prior to World War II. ISTC offered 12, including six graduate-level courses.

The Hoosier Schoolmaster of the Air earned those accolades by being on the forefront of creating live radio programs, especially for children. One of the longest-running educational children’s programs in broadcast history sprang from a small music box sitting in the ISTC radio studios. In an era when few colleges and universities produced quality radio programs, Morgan and his students used the music box to create the Fairy Princess of the Music Box, later the Story Princess of the Music Box. It aired weekly on WBOW for 31 years.

Using the music box for its theme music, Story Princesses told stories with strong moral lessons. Morgan’s students performed the parts of characters and created sound effects. They stopped using the music box when James R. Boyle, one of Morgan’s students and later his colleague, wrote and played the theme song many listeners eventually became familiar with. Story Princess of the Music Box supplemented the curriculum of over 100,000 children in 125 Wabash Valley classrooms and catapulted the young women playing the part of the Story Princess to local celebrity status. Many schoolchildren saved their money to travel to Terre Haute and meet their favorite Story Princess.

Another innovative program and favorite of Wabash Valley schoolchildren hopped from the pages of the Tale of Peter Rabbit, written by Beatrix Potter in 1902. Peter Rabbit and his pals were popular and appeared in many children’s activities, clubs and local radio programs throughout the U.S. In 1948, Morgan and his students the Peter Rabbit News Service, a children’s radio program recognized by Radio Daily and the Columbia Broadcasting System as the first and only news program broadcast specifically for children.

The program was set in a newsroom in the imaginary town of Forrestville. In his report on broadcasting activity in the 1948–49 school year, Morgan explained the Peter Rabbit News Service. “Peter Rabbit conducted a newsroom into which he called reporters from the animal world who told of events occurring nationally and internationally, in the local schools, and special features of interest to children,” he wrote.

Characters included Judge Owl, Molly Mockingbird, Barney Bear, Willie Weasel and Sammy Squirrel. Along with the news, characters interviewed live guests, such as an actual airline pilot who described what it was like to fly in an airplane. Children who contributed to the news reports with stories or suggestions received special cards with a picture of Peter Rabbit certifying the student as a “reporter for Peter Rabbit News Service.”

The Story Princess of the Music Box and the Peter Rabbit News Service were just two of the many programs Morgan and his students created combining entertainment and education. They later created programs broadcast over local commercial television station WTHI.

During his 35-year tenure as Indiana State’s director of radio and then director of radio and television and through his partnerships with WBOW and WTHI, Morgan used almost 200,000 donated minutes of airtime to broadcast over 10,000 live and recorded educational programs. It may never be known how many educators from other states and countries Morgan trained in ISTC’s annual workshops in radio and television broadcasting or how extensive his influence was in the creation of today’s public media. But many workshop attendees went on to build similar programs using Morgan’s strategy. Morgan’s work also inspired programs at the University of North Carolina at Chapel Hill and at the state teachers’ College in Kearney, Neb., among others.

Because he was humble and always put others before himself, little remains of Morgan’s work on state committees advocating for FM and TV educational channels. His push for public media and willingness to teach his successful strategy is the foundation for Indiana State University’s 90 years of continual radio broadcasting, its current roster of award-winning student-created programming, and arguably today’s public media.

Mary Myers teaches communication courses for Regent University and the University of Central Florida. Her research work on Morgan has resulted in two award-winning articles, multiple conference presentations and a PBS program about early educational radio. Myers is a Research Associate of the Library of Congress Radio Preservation Task Force.