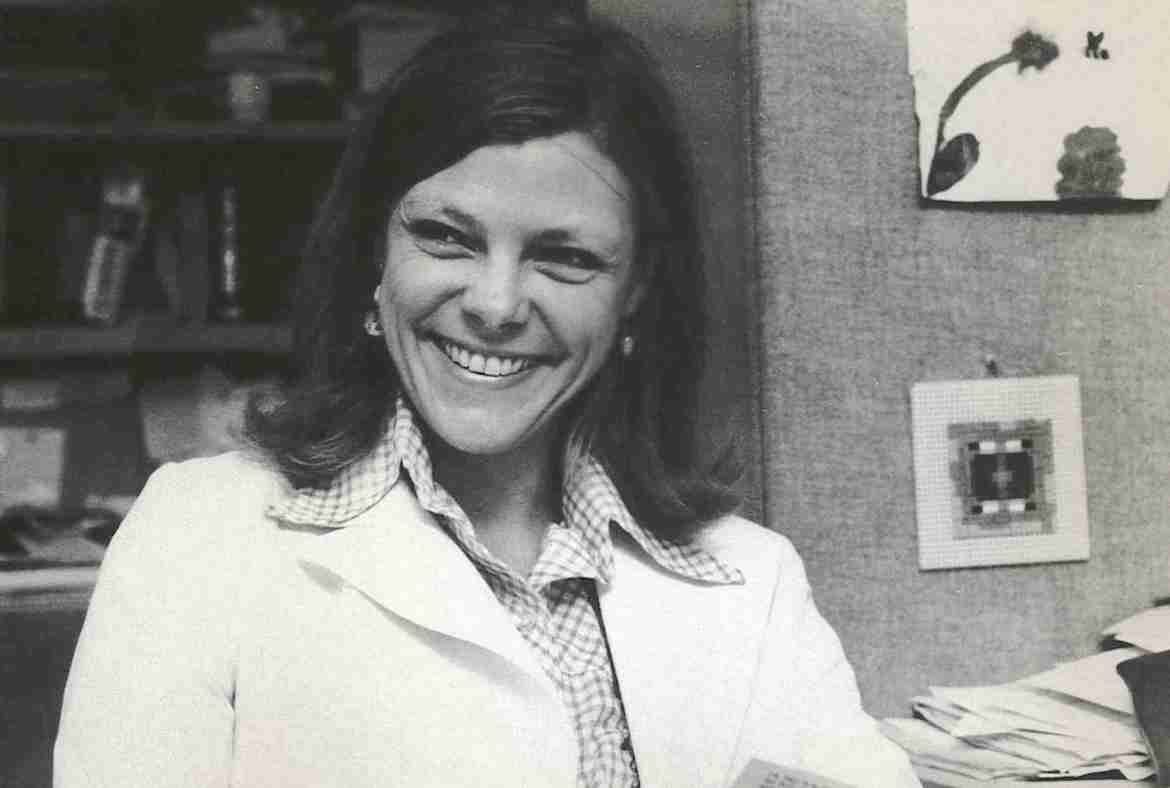 Roberts' approach of covering Congress through skeptical, not cynical, eyes set a model for reporters who followed her, said NPR's Tamara Keith.

Cokie Roberts, an NPR correspondent and commentator who blazed a trail for women in broadcast journalism, died Tuesday from complications related to breast cancer. She was 75.

The daughter of Hale and Lindy Boggs, both of whom represented Louisiana in Congress, she made her career in political reporting at a time when men dominated the profession. After joining NPR as congressional correspondent in 1978, she became one of the network’s “founding mothers” — including Susan Stamberg, Nina Totenberg and Linda Wertheimer — who created a place at the network for women to shape national news coverage.

Roberts left NPR in 1988 to join ABC News as a political correspondent. But up until her death, she continued to appear on NPR’s Morning Edition with regular “Ask Cokie” segments that answered listeners’ questions about events in the news from a historical perspective.

“She never left us. She always kept in touch and on our air,” Stamberg, NPR’s special correspondent, told Current.

“I can’t tell you the number of hard-bitten women reporters who have been in tears with me on the phone today,” said Totenberg, legal affairs correspondent, in an interview Tuesday. “I don’t know how they’re going to find a church big enough to hold the mourners.”

Born as Mary Martha Corinne Morrison Claiborne Boggs, Roberts was nicknamed Cokie as a child when her older brother Thomas couldn’t pronounce “Corinne.” Her father served as Democratic majority leader in the early 1970s. After he died in a plane crash in 1972, Lindy Boggs was elected to represent his district and served in the seat until 1991.

Cokie and her siblings grew up among Washington’s political elite. Her parents were friends with President Lyndon Johnson and Speaker of the House Sam Rayburn, among other politicians at the height of power. “She was very comfortable in the halls of Congress,” said Stamberg. “And when it came to report on them, I can’t think of anyone better equipped.”

After graduating from Wellesley College, Roberts started her broadcasting career by producing a TV quiz show for teenagers in Washington, D.C. She also hosted Meeting of the Minds, a roundtable discussion show with foreign journalists, according to a profile in Public Radio: Behind the Voices by Lisa A. Phillips.

She married New York Times correspondent Steve Roberts in 1964 and gave up her job in Washington to follow her husband as he was stationed in U.S. cities and abroad. During a 1973 stint in Greece, she reported as a freelancer to cover the war in Cyprus for CBS Radio and television.

After the Times reassigned Steve Roberts to report from Washington, Cokie joined NPR as congressional correspondent. NPR President Frank Mankiewicz, a former Democratic political strategist and friend of Lindy Boggs, hired her, according to Bill Kling, then president of Minnesota Public Radio. Kling happened to be in NPR’s offices when Sam Holt, then NPR’s program director, objected to hiring Roberts because of her connections to top Democrats. Mankiewicz won the argument.

“It was probably the wrong decision journalistically but in the end, absolutely the right decision on the person,” wrote Kling, now president emeritus of American Public Media, in an email.

Roberts’ arrival symbolized NPR’s new direction under Mankiewicz, wrote Jack Mitchell in his book Listener Supported: The Culture and History of Public Radio. Mankiewicz hired Roberts, promoted Linda Wertheimer “and helped them become essential listening to anyone who cared about what was happening in Congress,” wrote Mitchell, the first producer of All Things Considered, former head of Wisconsin Public Radio and three-time NPR Board chair. The pair “came to represent the highly competent, lucid, yet essentially mainstream, reporting that flourished under Mankiewicz.”

Stamberg remembers Roberts as a journalist who was bipartisan and even-handed in her reporting on political conflicts. “She was devoted to the truth, to fairness and honesty in her reporting, and you never, never heard bias,” Stamberg said. Roberts was involved in organizing a union in NPR’s newsroom, she recalled.

While at NPR, Roberts also contributed to PBS NewsHour.

At ABC News, Roberts was a political correspondent for World News Tonight with Peter Jennings. Over more than three decades at the network, she moved into co-anchoring and hosting roles at This Week, a Sunday morning political show, and as a regular fill-in host on Nightline. Roberts once remarked that the average amount of airtime she got to report from Capitol Hill at ABC was less than a third of the time she had on NPR.

After Roberts had moved on to ABC News, CPB gave her its 1990 Edward R. Murrow Award, recognizing outstanding contributions to public radio. She also shared several Emmy Awards for her work at ABC, and in 2008 the Library of Congress named her as a recipient of one of its Living Legend awards.

Roberts also wrote two best-selling books. From This Day Forward, on marriage, was co-written with her husband.

As an NPR contributor, Roberts tried to balance the demands of drawing on her reporting to deliver commentary. A syndicated column that she co-wrote with Steve Roberts in February  2016 described Donald Trump as one of the least qualified candidates ever to make a serious run for the presidency. The couple called for “the rational wing” of the Republican Party to stop Trump’s march toward its presidential nomination.

NPR management, which had tried to clarify ethical standards for political analysis following the 2010 firing of Juan Williams, took a stand. After the column ran, Michael Oreskes, then NPR’s SVP of news, sent an email to the news division that said “If Cokie were still a member of NPR’s staff, we would not have allowed that.”

In the email, dated March 14, 2016, Oreskes said Roberts agreed to appear on Morning Edition to discuss the controversial column with David Greene. “We will be working with her on how her role as a commentator might now be shaped,” he wrote.

“Candidly, it sort of broke her heart that she wrote one column about Trump that was pretty prescient, and NPR did not seem to have the balls to just stand up and say, ‘Yeah, she did that, and it was not on the air,’” Nina Totenberg recalled.

Commenting on Roberts’ death, President Trump told reporters aboard Air Force One Tuesday: “She never treated me nicely. But I would like to wish her family well. She was a professional, and I respect professionals.”

Barack and Michelle Obama released a statement calling Roberts “a trailblazing figure; a role model to young women at a time when the profession was still dominated by men; a constant over forty years of a shifting media landscape …”

In recent years, Roberts used an ISDN line from her home to connect with NPR for her Morning Edition appearances. “She really loved [doing] ‘Ask Cokie,’ although it was a huge amount of work,” said Totenberg. “That was her biggest beef with it. It was so much research.”

Totenberg said that decades before the #MeToo movement embroiled NPR’s newsroom,  Roberts was one of the founding mothers who made sure “those complaints were dealt with” at NPR.

She also looked out for female colleagues and aspiring journalists.

Tamara Keith recalled how Roberts responded to a letter she had sent her as a 15-year-old seeking advice on a career path into public radio journalism. Roberts told her not to pursue a major in communications.

“It was this tiny piece of advice, but it truly changed my trajectory and I am so much better for it,” Keith told Current.

Totenberg recalled how Roberts had the backs of other female colleagues, including political correspondent Mara Liasson. In the late 1980s, Liasson was on leave for a fellowship when Roberts discovered that NPR had posted a job opening for a White House correspondent. Roberts suspected that NPR brass planned to fill the position before Liasson returned. According to Totenberg, Roberts got word to Liasson, who ended up being hired.

“Even at a network that was dominated in many ways by women, you still had to have allies, and she was the ally in chief,” said Totenberg.

Cokie Roberts is survived by her husband Steven, their two children and six grandchildren.

One thought on “Cokie Roberts, a ‘founding mother’ who helped define NPR’s political coverage, dies at 75”