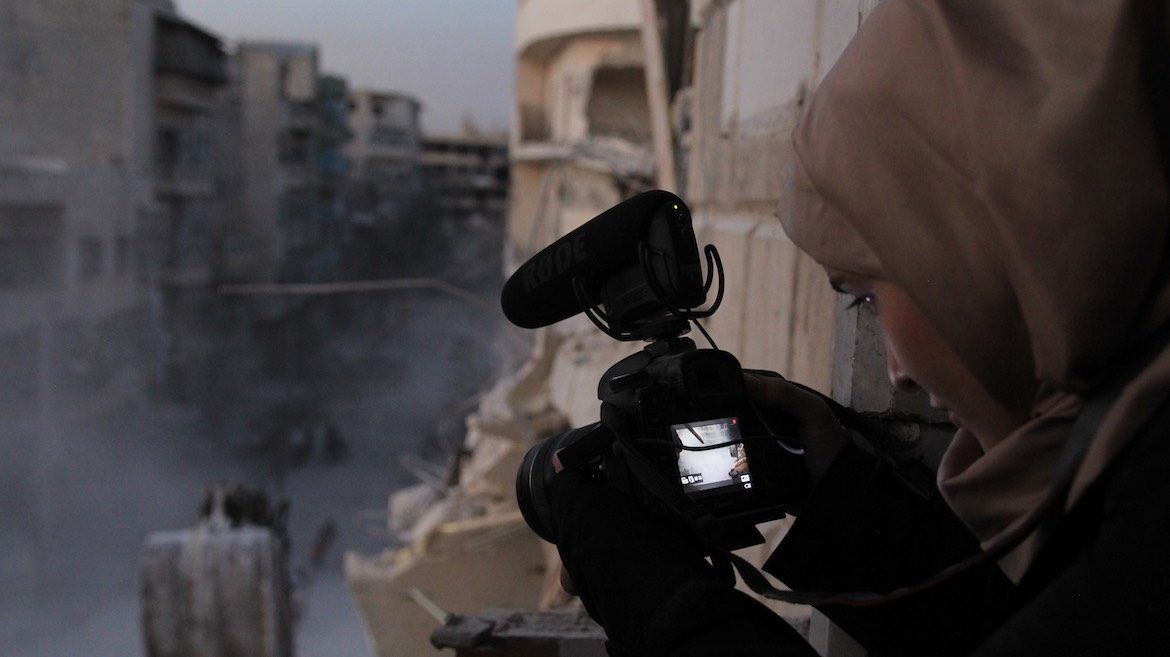 Waad al-Kateab films the ruins of a building destroyed by bombing in besieged east Aleppo in October 2016.

As Frontline EP Raney Aronson-Rath looks to broaden the reach and exposure of PBS’ flagship investigative journalism series, she’ll be shepherding at least one documentary a year through the festival circuit and onto big screens around the country.

Frontline has already started along this path with For Sama, a close-up of the Syrian revolution shot over five years by Aleppo University economics student turned rebel and filmmaker Waad al-Kateab.

The film has swept documentary awards from South by Southwest to Cannes. PBS Distribution is managing the theatrical run, which launched in New York City, San Francisco and Los Angeles in July and is expanding into additional markets, according to Aronson-Rath. The film’s PBS broadcast premiere on Frontline is tentatively scheduled for Nov. 19.

Frontline and PBS Distribution also are planning a theatrical release this fall for On the President’s Orders, an unusual depiction of the deadly war on drugs staged by Rodrigo Duterte, president of the Philippines. Filmmakers James Jones and Olivier Sarbil were embedded in a Manila police unit during production. The documentary will hit theaters in New York City and Los Angeles in October, leading up to its tentative Nov. 12 broadcast premiere. Additional screenings may be added to the run, said Pam Johnston, Frontline’s senior director of strategy and audience.

A Frontline film that debuted in March, The Trial of Ratko Mladic, is on the international film festival circuit, Johnson said. The documentary about the Bosnian Serb general who was tried for crimes against humanity and genocide at the International Criminal Tribunal for the former Yugoslavia was directed by Henry Singer and Robert Miller.

“This era has been called the golden age of documentaries, and I increasingly felt that at the right time and with the right film, it made sense for us to be in this space,” Aronson-Rath said. “Seeing a documentary on a big screen is a different experience, and there are documentaries that Frontline supports that should be seen in the theater and festival environment.”

For Sama, produced by Channel 4 News/ITV Productions for Channel 4 and Frontline, is cinematic from its opening sequence to final scenes. As credits roll, an aerial drone camera captures Waad carrying her baby daughter Sama down the middle of a deserted, wrecked street.

Waad’s unique voice as a woman living in a conflict zone is distinctively different from those heard in Frontline’s recent films about Syria and the Middle East, Aronson-Rath said. “It was really a mother’s story told through Waad’s perspective, which we have not done before,” she said.

Waad narrates her journey from feisty undergraduate to insurgent, wife, mother and self-taught filmmaker faced with wrenching choices. She began filming in 2011 and crafted the film around talking to her daughter, still too young to speak, about life, love and loss.

Her husband Hamza al-Kateab is a doctor. The couple and their band of holdouts create a makeshift hospital from a bombed-out building that is the last medical facility in rebellious East Aleppo. The building becomes a refuge for the few people remaining, often by choice, in an increasingly emptied and smoking city. The family struggles to stay in the building until their block of the city is surrounded by military forces supporting dictator Bashar al-Assad. When Russian allies of al-Assad broker a deal for the family to leave, they go into exile in the U.K.

When Waad and Hamza left Syria in late 2016, Sama was one year old.

Waad smuggled hard drives containing her film footage out with them. Over two years, she and co-director Edward Watts culled and shaped 300 to 500 hours of the footage into a wrenching 95-minute film.

Amy Letourneau, VP of strategy and business affairs for PBS Distribution, called the documentary “epic and intimate at the same time.” She oversees the division’s in-house theatrical division and is working closely with Frontline’s team.

The theatrical release strategy is designed to draw new audiences to Frontline and PBS on different platforms, she said, “bringing in new viewers to the system.”

Frontline’s move into theaters was inspired by the success of Abacus: Small Enough to Jail, a 2017 documentary about the only U.S. bank prosecuted after the 2008 financial crisis, Aronson-Rath said. Director Steve James (Hoop Dreams) pushed for a theatrical release prior to its PBS debut, and the film was nominated for an Academy Award.

The Oscar recognition and theatrical release prompted Aronson-Rath to study whether presenting more films in theaters and at film festivals would help Frontline reach new audiences, she said. She decided that it would.

The strategy will also help Frontline develop relationships with a more diverse group of filmmakers, Aronson-Rath said. Up-and-coming talents increasingly want their work to be screened in theaters and at film festivals, she said.

The success of the new strategy can be measured in large part by social media engagement, which builds buzz and conversations about films during film festivals, Aronson-Rath said. “[You] can’t always do that with broadcast,” she said.

To support the theatrical releases and build engagement around the films, Frontline is leveraging its digital platforms and actively reaching out to stations and other community-based institutions to host screenings and discussions of its films.

Erika Howard, who joined Frontline in February as impact producer, is leading the effort. She’s taken documentaries to the University of Texas at Austin, the United States Holocaust Memorial Museum, the Middle East Institute and the University of California, Berkeley.

Before Howard arrived, outreach to educate and engage audiences off-air with Frontline films have been limited. Now it is “a concerted, strategic effort,” Aronson-Rath said.

“I care deeply about the future of Frontline, and this approach is strengthening that future,” she said.