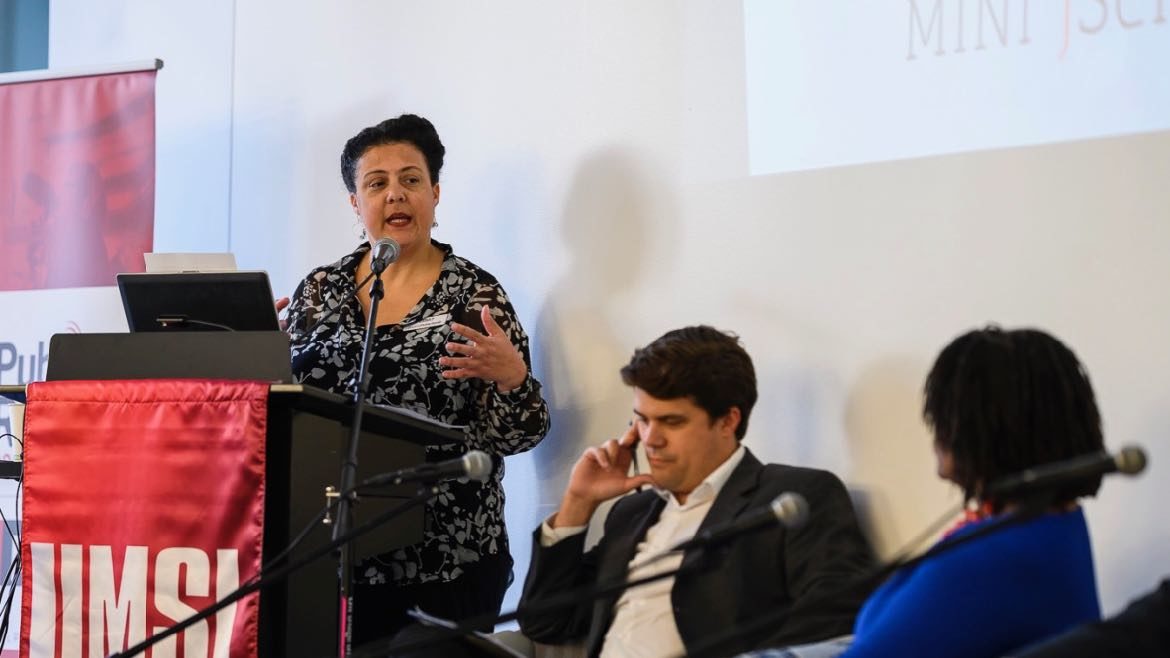 Holly Edgell, St. Louis Public Radio's race, identity and culture editor, moderates a panel titled “Why We Cover What We Cover” as part of the station's Mini J School.

The mini–med school consists of evening lectures meant to give the broader public a glimpse into the inner workings of the practice of medicine. Kerley and Bewley, who work in fundraising at St. Louis Public Radio, attended sessions from 2014 to 2018 and came away inspired.

People would also love to know about the inner workings of journalism, they thought. Perhaps the radio station could host a similar series.

“So what would that be? It would be Mini J School,” said Kerley, the radio station’s director of development.

What resulted was St. Louis Public Radio’s first-ever Mini J School, a series of six weekly sessions held from April to May this year. To the knowledge of the Mini J School’s promoters, it’s the country’s only journalism class for the public held by a public media outlet.

Roughly 100 people, most of them St. Louis Public Radio members and supporters, paid $120 to attend. They visited St. Louis Public Radio’s community room in the city’s downtown Grand Center neighborhood to participate in evening sessions hosted by journalists from outlets across the region. Topics included serious issues like media literacy and libel law and lighter fare like food reporting and TV weather coverage.

Kerley said the time seemed ripe for such a program. She had been hearing from station members and supporters that they wanted tips about becoming better news consumers. At the same time, public confidence in the media is low. A Columbia Journalism Review poll earlier this year, for example, found that 60% of respondents believed sources pay reporters to write news stories.

“At this moment, we’re hearing a lot about ‘fake news,’ or seeing people sharing things that they think are news and maybe are not,” Kerley said. “We felt a need and a desire for people to know and understand more deeply how you can tell the news you’re getting is from a reputable source, but even going deeper than that, to understand the profession of journalism and why it’s important for democracy.”

Stacey McMackin, a school librarian and longtime public radio supporter who attended Mini J School, said she came away from the sessions knowing more about how professional reporting works and with more hope for the industry’s future.

“We can be advocates now,” McMackin said of herself and her classmates. “We’re trying to build public awareness of the value right now, because journalism as a field, it’s under attack.”

A team effort that paid off

After attending the mini–med school sessions, Kerley and Bewley, the station’s major gift manager, approached St. Louis Public Radio’s news department with their idea. Employees from each of the radio station’s departments formed a committee and brainstormed 40 topics for lecture sessions, which a content team of journalists cut to 12.

One theme guided the content committee as it conceived the series: “How can we help people become better news consumers?” Kerley said.

Once the topics were chosen, Leslie Davis, the station’s special events director, began coordinating the series. The station recruited hosts and panelists from media outlets that included AM talk radio station KMOX, the African American community newspaper St. Louis American and the alternative weekly newspaper Riverfront Times. St. Louis Public Radio reporters participated in panels for half of the sessions. Putting the series together took the better part of a year.

Ticket purchases covered the cost of small honoraria for speakers and furniture for the classroom, Davis said. While the Mini J School this year focused on educating participants, the station may approach the series as more of a “revenue event” in the future, she said.

Key to the event’s success was the partnership of the station’s news and marketing departments, said Holly Edgell, St. Louis Public Radio’s race, identity and culture editor and a host of some sessions. Journalists should direct the content for such an event, she said, while marketers and fundraisers should oversee logistics.

“The commitment has to be there to put a good-size team on it,” Edgell said. “And if you’re a smaller outlet interested in doing something similar, do a smaller project.”

Graduates on guard for accuracy

The Mini J School attracted a “cross-generational” audience of young professionals and older retirees, Kerley said, who were united perhaps a bit too strongly by a love of public radio.

Speakers “were kind of preaching to the choir,” McMackin said. “People there were staunch supporters of the station and very interested in journalism.”

McMackin said she wishes the station could find ways to do outreach around media literacy beyond its regular listeners. But she also took home talking points for when she encounters someone at a social event who is skeptical about journalism.

“I can tell them how to avoid bias as much as possible,” she said. “Everything you read in a newspaper is fact-checked. I can tell them the process.”

Mark Holly, a retired Boeing structural engineer who attended all of the Mini J School sessions, said he also gained practical knowledge. Holly said he used it recently when a friend shared a Facebook meme falsely claiming that the Obama administration had imprisoned a soldier.

Holly told his friend to “check his sources.”

“Servicemen are not imprisoned by the political class and are subjected to the code of conduct,” he said. “If [the soldier] was imprisoned, it would be by a court-martial.”

Edgell said she was surprised by which Mini J School sessions were the most popular, such as the class about TV weather coverage. The station tapped Mike Roberts, a well-known retired meteorologist from local TV, to host that session.

“He had a whole hour to himself and everyone loved it,” Edgell said. “They ate it up.”

Other sessions taught participants how to spot fake news and how reporters interview sources.

The radio station surveyed attendees at the end of the sessions, and Davis said that based on the responses, “we feel confident that it only needs minor tweaks.” Most of the changes will be logistical.

“We’ll offer a similar program again and assess whether or not we rotate in a different set of sessions after then,” Davis said.