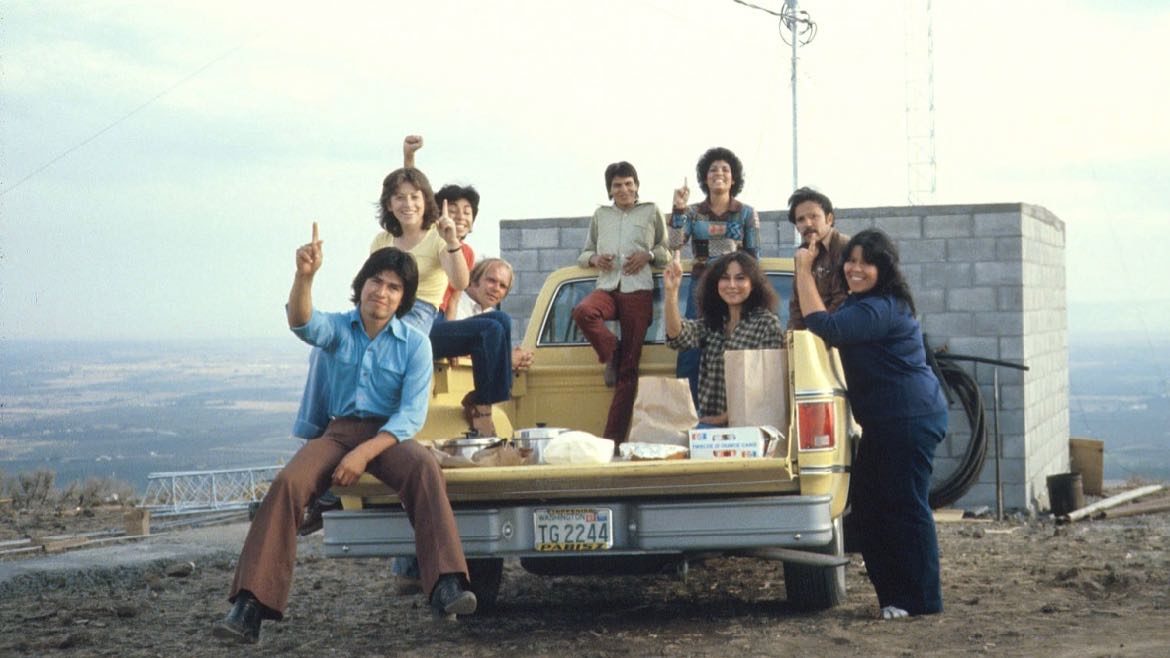 Too often, popular accounts of Spanish-language media focus on radio ratings within profit-driven radio markets and cities with large Latina/o populations, such as New York, Los Angeles, Chicago and Houston. Yet since the 1970s, Spanish-language and bilingual (Spanish-English) community radio has flourished in rural, farmworker and Mexican-dominant communities. The anticommercial spirit of the 1960s and 1970s helped launch a wave of public media outlets with an ethos of racial and gender inclusivity in both radio programming and management operations. These decades changed the airwaves as Spanish-language programming nudged its way into increasingly crowded AM and FM dials.

Media activists argued that the Corporation for Public Broadcasting privileged English-speaking, white, middle-class listeners. In response, CPB helped diversify public media by offering seed grants, training workshops and expert counsel to nonprofit and community organizations, targeting women and people of color eager to build radio stations and produce radio shows for Spanish-dominant and bilingual listeners. Farmworker communities, in particular, advocated for broadcasts in Spanish — symbolically, sure, to insist that the public in public media communicated in a language other than English. Yet, much more importantly, radio was used to organize labor, broadcast key information, help listeners navigate new institutions and remind listeners that though they might be far from their Mexican and Central American homelands, they were hardly alone.

Three radio stations in particular — KBBF-FM in Santa Rosa, Calif.; KSJV-FM in Fresno, Calif.; and KDNA-FM in Granger, Wash., all located in rural farmworker communities — were founded in the late 1970s with a then-unique approach to radio production that included training farmworkers, many of them women, in broadcasting. To date, these stations are recognized as the first Spanish-language and/or bilingual community radio stations licensed by the FCC. These stations have endured the conservative lean-budget years of the 1980s, as well as the epic media consolidation of the 1990s and Univision’s dominance of commercial Spanish-language radio in the early 2000s. Their tenacity inspired United Farmworkers Union co-founder César Chávez, who in 1979 visited KDNA-FM and marveled at the radio station’s farmworker-oriented operations. Soon after, the UFW joined the airwaves in 1983, equally convinced that radio was the most efficient means of reaching farmworkers toiling in fields with AM/FM Walkmans or boom boxes stationed nearby at high volumes. Today, the César Chávez Foundation and CPB help fund two of the stations in the Radio Campesina (Farmworker Radio) network that broadcasts across the states of Arizona, Washington, Nevada and California. Together, community radio activists and broadcasters were committed to transforming the airwaves to include locally produced programming that addressed the needs of Chicana/o (Mexican American) and Mexican listeners.

Farmworker communities in rural agricultural hubs across the U.S. were products of the Bracero Program, whereby mostly agribusinesses contracted Mexican workers in response to the labor shortages caused by World War II, which in turn lowered wages. The end of the Bracero Program in 1964 marked a turn in the recruitment of migrant men to entire migrant family units. Many Mexican and Tejano farmworkers migrated seasonally to agriculturally rich states such as Idaho, Oregon and Washington and eventually made the Pacific Northwest their permanent homes. These Spanish-dominant listeners were eager to tune in to music, news and educational programming in their language.

A sampling of the unique early programming offered by these Spanish-language and bilingual public radio stations included the Hora Médica, a call-in show featuring guest health practitioners and public health officials, and Chicana as a Single Parent, a show hosted and produced by four Chicanas focused on the gendered experiences of raising children. Both aired on KBBF, which was established in 1973. Shortly thereafter, listeners in Washington’s Yakima Valley could tune in to KDNA, founded in 1979, for Mujer, a public-affairs show produced by Chicana hosts with an emphasis on women’s social issues, as well as El Jardin de los Niños, a Saturday-morning children’s program on KDNA. KSJV debuted in 1980 and began a popular Tejano music show, La Onda Tejana, tapping into Mexican communities migrating seasonally between the fields of Texas and California.

Radio continues to be an accessible medium for farmworker communities who live in racially isolated barrios with limited access to other media. In comparison to television, listening to radio is both more cost-efficient and convenient given its portable nature. It also lends itself to a workforce demographic, like those of Latinas/os, accustomed to unfavorable graveyard and swing shifts and in service sectors where radio provides companionship, such as housekeeping, construction and kitchens. Stations have long courted listeners by fashioning identities with logos, call letters and slogans evoking Spanish-language slang. Phrases such q’vo (“What’s up?”) appear in call letters as KUVO and KUBO, while KRZA refers to “que raza.” KDNA was referred to as “La voz del campesino” (“The voice of the farmworker”), and KBBF as “La voz del pueblo” (“The voice of the people”). These monikers were constitutive of “Chicano Public Radio,” a term used by early station managers and indicative of the then-political moment to discern the public airways as both nonwhite and non–white-collared, in recognition of a growing immigrant, working-class listenership.

The right to participate within public media, to a voice in one’s native language and to be heard over the airwaves affects how communities of color not only listen to each other but how they later imagine themselves as belonging, both socially and politically, in the U.S. A historical view of bilingual and Spanish-language public radio forces those practicing and studying radio and sound to consider how public media has long functioned as both bridge and ally between Spanish-dominant listeners and institutions like schools, law enforcement, public health and immigration. These lesser-known radio histories demonstrate how these early CPB seed grants did more than just diversify radio. They helped distinguish Spanish-language and bilingual broadcasting as a form of advocacy. True, radio ratings ensure that we focus on the commanding numeric growth of Spanish-language radio. Yet we need more media and radio histories to situate these early alliances as productive, long-term investments into politically disenfranchised listeners, not just radio stations.

Dolores Inés Casillas is Associate Professor in the Department of Chicana and Chicano Studies at the University of California, Santa Barbara. She is the author of Sounds of Belonging: U.S. Spanish-language Radio and Public Advocacy (NYU Press, 2014), which received two book prizes, and is co-editor of the Companion to Latina/o Media Studies (Routledge Press, 2016) and of Feeling It: Language, Race and Affect in Latinx Youth Learning (Routledge Press, 2018).

This essay appears as part of Rewind: The Roots of Public Media, Current’s series of commentaries about the history of public media. The series is created in partnership with the RPTF, an initiative of the Library of Congress. Josh Shepperd, assistant professor of media studies at Catholic University in Washington, D.C., and national research director of the RPTF, is Faculty Curator of the Rewind series. Email: shepperd@cua.edu