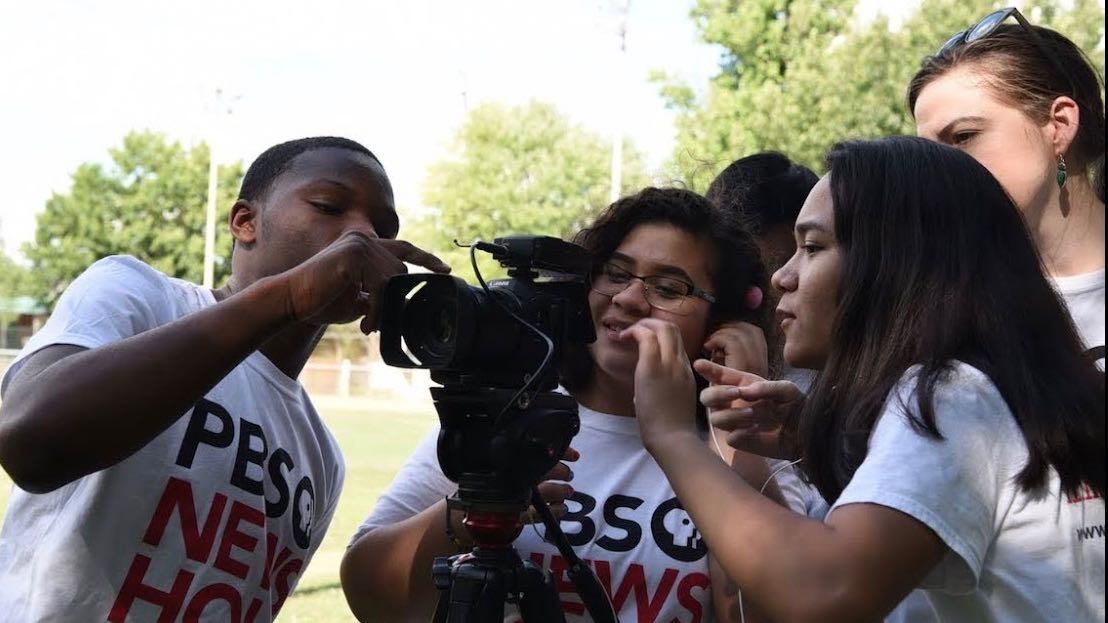 Through its first-ever partnership with Instagram, PBS NewsHour experimented in May with a new format for covering the arts.

The NewsHour’s Student Reporting Labs produced Art IRL (In Real Life), a series of Instagram TV posts on public art that ran weekly throughout the month. The series was reported and produced entirely by high school students with the support of their educators, SRL, NewsHour, and Instagram’s News Partnership team.

The last remaining residents of Centralia, Pennsylvania, differ with tourists on whether the town's #Graffiti Highway is #art or #vandalism. From @studentreportinglabs at Cedar Crest High School in #Pennsylvania, with station support from @witfnews. #artIRL

Student Reporting Labs is a school-based program that helps educators teach journalism skills to middle- and high-school students. Since SRL’s launch in 2009 as a grant-funded NewsHour initiative, 150 schools across the United States have adopted the media training, and close to 15,000 students have participated.

Students learn reporting, writing, editing and camera skills while connecting with other young aspiring journalists. One cornerstone of the program, the  Student Reporting Labs Academy, brought 26 students to Washington, D.C., last month for a week of training with journalism educators and public media mentors.

Student Reporting Labs began collaborating with the Instagram News Partnership team in early 2019 to introduce the “Instagram Story School,” which taught best practices and tactics for reporting on Instagram through weekly virtual trainings to students that concluded in April.

“We thought it would be a great opportunity for students to tell stories on a platform that they’re already on,” said Leah Clapman, creator and managing editor of the Student Reporting Labs.

Elis Estrada, director of SRL, said the goal of the project was simply “to infuse Instagram with original news reporting created by teens for teens.”

Lila King, news partnership lead at Instagram, wanted the Story School to build on the familiarity that most students and young people have with social media. “Students can use the same tools they use to communicate with their friends to tell bigger stories to bigger audiences about their community,” she said.

Ian Morley, a student at Cedar Crest High School in Lebanon, Pa., appreciated learning to shoot, format and produce videos for Instagram TV. During Story School, he worked on techniques that would make his video report stand out on Instagram, he said, where stories need visual hooks to keep audiences from scrolling on to “the other hundreds upon thousands of stories.”

Teachers who have adopted SRL into their curriculums also described benefits from the training. It’s important for students to learn IGTV’s vertical video format, said Chris Schwalm, who runs the lab at Cedar Crest. “These have been essential experiences for the students who worked on the piece.”

Instagram TV allows users to create vertical, full-screen videos to share on their Instagram pages. PBS NewsHour began using Instagram TV in 2018 to share video clips and special reports, and has built a following of more than 197,000 users. The Art IRL videos were published on NewsHour’s Instagram TV on Fridays in May, and are still available to view through the show’s Instagram page.

While the students produced their reports, staff from Instagram and Student Reporting Labs helped trouble-shoot as they adapted to working in the vertical format. “To have Instagram’s support, knowing that they really support student journalism and teaching students how to tell stories on their platform, was a great opportunity for all of us,” said Estrada.

Each report for Art IRL lasted no longer than three minutes and featured a work of public art near the students’ hometown. Morley’s story from Pennsylvania explored the history of an abandoned highway that’s now covered in graffiti art. A student from New York City’s Bronx borough reported on a mural that brought the community together after the tragic death of a young man who lived there.

“So much of what we do at Instagram is helping news organizations reach the next generation of their audience,” said King. “One essential element of speaking to a young audience is reflecting them, and involving them in the process.”

Students submitted more than 60 Art IRL reports to the Student Reporting Labs by April. Estrada, Clapman and other NewsHour team members selected five to be released on Instagram TV. Local stations of participating SRL schools joined the NewsHour in presenting the students’ work on Instagram.

“We wanted to see how this project increased engagement on our social media accounts, and how NewsHour’s audience responded to new content on IGTV,” said Estrada.

According to the Student Reporting Labs team, the Art IRL stories reached a potential audience of nearly 200,000 Instagram users. “For our high school students, these are audiences that they otherwise would never have access to,” Estrada said. With training and support from SRL and public media, they’re empowered “to create well-informed content that is also fun and relatable.”

With the increased visibility gained from SRL projects like Art IRL, Clapman and Estrada are receiving more and more requests from teachers looking to start a lab in their school. They’re in the process of seeking new grants and other funds to expand the program.

“We’re still trying to build bridges between the spaces where our student journalists engage on social media with their friends and where they can share their reporting on current events and news in their communities,” said Estrada.

Corrections: An earlier version of this article incorrectly reported that Student Reporting Labs began in 2013, but it was founded in 2009. The earlier version also incorrectly reported that 3,000 students have participated since its launch. SRL has reached nearly 15,000 students. The article has also been revised to clarify the training provided this year in collaboration with the Instagram News Partnership.