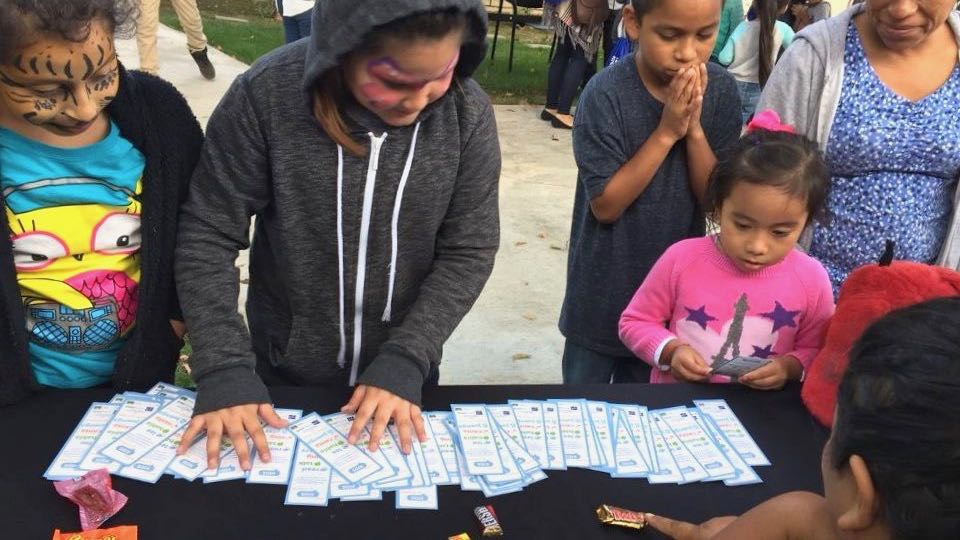 Kids and parents pick up bookmarks promoting the Bright By Text service at a ValleyPBS resource fair.

An early-childhood learning initiative that delivers child-care guidance and timely information to parents and caregivers via text messages is expanding to more public TV stations with support from Ready To Learn.

Bright By Text, a service from Denver-based child-development nonprofit Bright By Three, recently completed an 18-month CPB-backed pilot program with six stations. It now has secured licenses with 24 PBS stations, according to President Jean McSpadden.

Parents and caregivers who subscribe to the service receive text messages that link to research-based content on childcare and timely information on local events for kids and families. A new mother might click on an article about how to soothe an infant;  a toddler’s father could watch a short video on dental care for young children; a nanny could discover a weekly reading hour at a library nearby.

Caregivers receive age-appropriate advice and tips addressing their information needs from pregnancy until their child reaches age 5; Bright By Text hopes to soon expand its content to cover child development up to age 8. Topics include health and safety, early literacy, nutrition, games and more. Content arrives in English or Spanish.

Bright By Three supplies the digital platform, user data and research-based content from partners including PBS LearningMedia, Sesame Street, the brain-development project Vroom and the Behavioral Insights and Parenting Lab at the University of Chicago.

Bright By Text first partnered with Rocky Mountain PBS in 2015, shortly after Bright By Three began developing the service. The Denver station was looking for a way to promote early childhood education, and the two organizations paired up to encourage Bright By Text sign-ups through station on-air promotional interstitials. Some 6,500 users subscribed, and RMPBS spearheaded the nationwide pilot program backed by CPB and The David & Lucile Packard Foundation in 2017.

The pilot aimed to create new learning tools and help parents and caregivers connect with educational resources in their communities.

WFYI in Indianapolis, one of the pilot stations, found that Bright By Text “is a great way to use the power of public media to help ensure stronger futures for children,” said Gail Strong, community engagement VP.

“When I talked to our board at the beginning of the project, I said, ‘Imagine the power of having us in a purse or pocket for nine years.’ That’s a phenomenal level of trust,” Strong said. The station now has 2,800 Bright By Text subscribers, a number that steadily continues to grow.

Of the 24 PBS member stations signed up for Bright By Text, 20 are using Ready To Learn funds to cover the licensing fee, McSpadden said. A CPB spokesperson said the funds are available through its Community Collaboratives for Early Learning and Media program.

Some 70% of Bright By Text’s active 56,000 subscribers nationwide now use a public TV station’s keyword to sign up.

“We would love to have even more stations participating, whether they’re Ready To Learn stations or not,” McSpadden said. “This seems like a great marriage of educational information and a way to really engage communities at a deeper level.”

Bright By Three was founded in 1995 as Bright Beginnings by former Procter & Gamble Chair Brad Butler and Colorado Gov. Roy Romer, who both wanted to position the state as a leader in early childhood parenting support. Initially the nonprofit conducted home visits to share information directly with parents and caregivers.

Bright By Three developed Bright By Text as a way to reach and engage more parents and caregivers.

“We want to reach parents where they are, and how they want to get their information,” McSpadden said. “Everyone is carrying a smartphone and texting is the most ubiquitous form of communication.”

The service is similar to Text 413 Families, a program developed by WGBY in Springfield, Mass., and community partners that’s focused on promoting early-literacy. Ready To Learn backed a pilot of that service in 2011.

Bright By Text subscribers receive between two and four texts per week. Click-through rates, which measure how often users open the content, average around 15%, according to McSpadden. That compares with a text-alert industry average of 6% or less, she said. “So we know this is a highly successful program giving parents and caregivers the information they want and need,” McSpadden said.

Those messages are also reaching populations targeted by Ready To Learn. Bright By Three research shows that 38% of users nationwide live in ZIP Codes with low household incomes and limited access to professional healthcare.

Participating stations receive training on how to craft effective messages, including those from community partners. Each local message is reviewed by the station and  then sent to Bright by Text for final review. The vetting process helps ensure they are “crafted in what has been proven to be the best structure,” McSpadden said.

Once a message is approved, the station sends it out to subscribers, targeting recipients based their on child’s age and ZIP code. Stations control the number of texts, so users don’t get bombarded.

In Indiana, more organizations want their texts included, Strong said. Last year The Milk Bank, a nonprofit that supplies pasteurized mother’s milk to at-risk infants, contacted WFYI to text a message about locations where mothers could nurse their babies at the State Fairgrounds.

WFYI is working with 10 local groups on Bright By Text and hoping to add more, Strong said. “Some organizations we’ve been partnering with for years, like the library,” she said. “But this is a new way to work with them, and a new way for them to reach families” about services and upcoming events, she said.

Bright By Text “has helped our station be seen as a true partner to local nonprofits,” said Natali Carrera, educational services VP at ValleyPBS in Fresno, Calif. Educational outreach “has always been a huge focus of our station,” Carrera said, serving thousands of parents and kids at various workshops.

Carrera said the texting service  is “a natural fit for us.” Many of the texts from local organizations actually have a click-through rate of over 100%, she said, as users return to double-check events or sign up for activities.

Stations can glean such data from a localized dashboard that shows Bright By Text user activity. Carrera said the dashboard also allows the station to target event texts in ZIP codes in the seven counties that receive ValleyPBS. Just under 5,000 users have signed up for the services, she said, and that number is steadily creeping up. “For our area, we’re very pleased,” Carrera said.

The texting initiative also will be an important part of WNET’s focus on the South Bronx, a historically disadvantaged area, for the next two years of its Ready To Learn program, said Sandra Sheppard, WNET director and EP of kids’ media and education. “Now we have a wider array of partner organizations in the South Bronx such as a settlement house, a homeless shelter and a children’s museum,” she said. “We see Bright By Text as an additional tool for serving this community.”

Participating stations are also hearing from parents grateful for the texts. One mother just taped a testimonial for ValleyPBS, Carrera said. “She found out through Bright By Text about a reading hour happening at a bookstore near her home, and now she takes her kids regularly,” she said.

At dual licensee WFYI, All Things Considered host Matt Pelsor texted coworkers the day his son was born to report his weight and length. He also noted that “the little guy was just signed up for Bright By Text,” Strong said. “Matt became a remarkable advocate for Bright By Text and as his son has grown, he’s recorded radio spots,” ranging from Pelsor’s adventures as a “fumbling first-time dad to being the frantic parent of a toddler,” she said.

McSpadden said she hopes Bright By Text will have 100 licensed partners and 250,000 subscribers over the next two years.