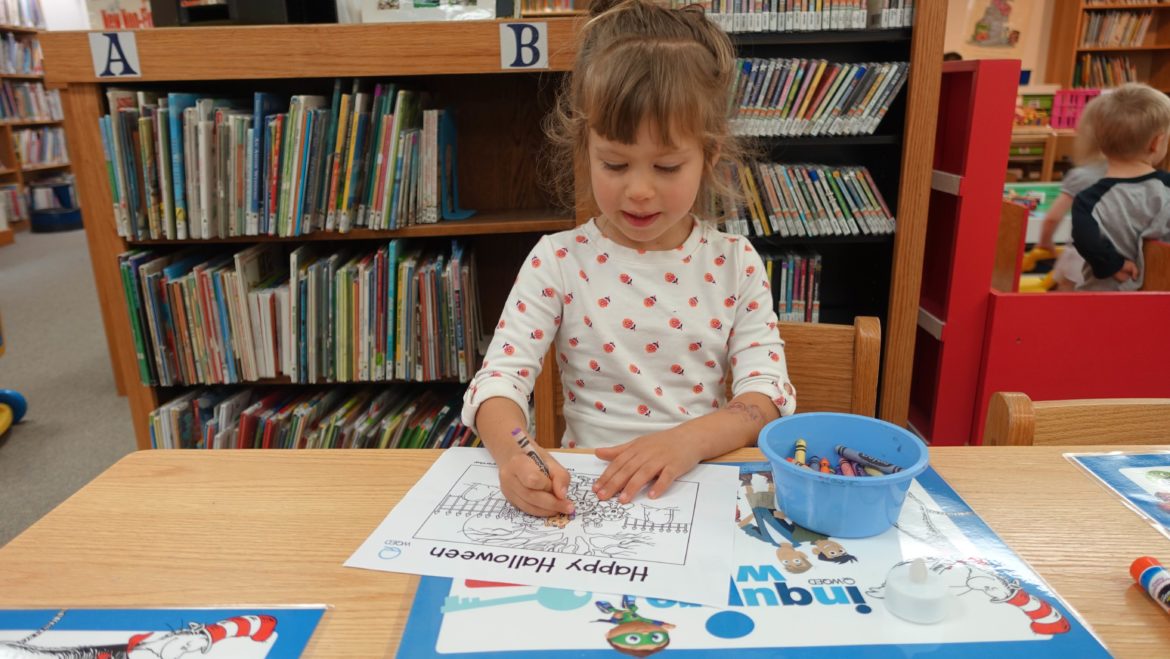 A child colors an Inquire Within worksheet at Adams Memorial Library in Latrobe, Pa.

A WQED program that provides libraries with a curriculum based on PBS Kids shows is expanding beyond the station’s broadcast area and partnering with a neighboring public broadcaster.

Now in its third year with local funding, the Inquire Within program is launching in 10 libraries throughout West Virginia in partnership with West Virginia Public Broadcasting. WQED already works with 30 libraries within its TV broadcast area, which covers southwestern Pennsylvania, eastern Ohio and northern West Virginia.

“Public libraries and public media really serve the same population and really have the same mission at heart, so it’s really not a far leap to put those together,” said Gina Masciola, WQED’s manager of education projects.

WQED provides each library with supplies for readings, episode screenings, character visits and other events. Repeated Inquire Within programs are packaged as kits for libraries to check out and borrow. Libraries also get eight PBS-branded Android tablets loaded with PBS apps and games that patrons can check out or use on site or that can be reserved for Inquire Within programs.

WQED launched Inquire Within in 2014 and had seven participating libraries by the end of the year. In October 2016 it began receiving funding from local businesses and the Department of Education’s Ready To Learn program.

Almost every county within WQED-TV’s signal includes a participating library. The last gap in coverage was in Pittsburgh because of the logistical difficulties of partnering with the large Carnegie Library system, according to Masciola. But WQED launched its first Inquire Within program in the 18-library system April 1 and got its “foot in the door” in the city, she said.

‘You would have thought we were giving out gold bars’

Since partnering with WQED in October 2017, Adams Memorial Library in Latrobe, Pa., has staged 35 Inquire Within programs that have drawn 512 attendees, averaging about 15 attendees per program, according to Karen Herc, children’s director at the library. Herc tries to hold an Inquire Within program at least monthly.

Before Inquire Within, the library’s media-themed events focused solely on Fred Rogers, who is from Latrobe. The library has always celebrated his birthday in March, but making it an Inquire Within event featuring Daniel Tiger’s Neighborhood sparked “even greater interest and success,” Herc said.

“You would have thought we were giving out gold bars with the lines we had,” Herc said. “It still makes me happy to see people use them as book bags.”

Herc said her first year with Inquire Within “felt like a whirlwind” because she wasn’t expecting to participate in the program. “The second year, we’re hoping to dig a little deeper,” she said.

Inquire Within has succeeded in part because it’s sustainable, according to Masciola. It’s easy to implement and adapt to each library, and librarians have a lot of control over which programs they want to do and when.

WQED also holds biannual conferences where librarians can network and launched a website where they can discuss ideas for programs. These relationships help the program sustain itself, which appeals to funders, Masciola said.

Inquire Within also appeals to funders because they can target the community they serve and potentially send employees to volunteer, Masciola said.

The opportunity for employees to volunteer is one reason why Clearview Federal Credit Union, based in southwestern Pennsylvania, decided to fund Inquire Within at Adams Memorial, according to Christianne Gribben, Clearview’s assistant VP of marketing. The company gives employees paid time off to do community service, with a goal of reaching 10,000 volunteer hours this year.

Clearview had previously sponsored PBS programs and saw Inquire Within as an opportunity to teach financial literacy through curricula based on shows such as Peg + Cat and Sesame Street, according to Gribben.

“The program is fun, PBS characters are fun,” Gribben said. “It’s really rewarding to get those characters brought to life. It’s a unique benefit that we get to bring to our community.”

Ten funders support Inquire Within. Two libraries funded by Ready To Learn until 2020 are the only institutions not funded by local partners, according to Masciola.

Funders contribute $8,000 per year for each Inquire Within program they support. After three years, the cost of reusable resources has been covered, and funders’ yearly contribution drops to $4,000 for single-use supplies, the Inquire Within website, graphics and salaries of WQED staffers who help run the program.

During Inquire Within’s third year of local funding, WQED is focusing on connecting libraries with other resources and partners, according to Masciola. For rural and suburban communities, for example, this could mean connecting them to resources usually available only in cities, such as museums and community programs.

WQED is also looking to expand the audience of Inquire Within. Most PBS Kids content targets children ages 2–8, but WQED has been working on creating more programs for older children and adults without children, according to Masciola.

WQED tracks the success of individual Inquire Within programs through evaluation forms submitted by librarians. On a grander scale, Masciola sees the expansion of Inquire Within as a measure of success.

“I know we’re successful when other libraries and partners are reaching out to us and inboxing our general mailbox about how they can be involved in these types of programs,” Masciola said. “That’s how I know we’ve got traction.”

Inquire Within will expand in West Virginia later this year. WVPB had already modeled library outreach programs after Inquire Within. It decided to join the program and use its curriculum when WQED approached WVPB about a funder that wanted to support more libraries, according to Kate FitzGerald, WVPB’s education director.

“I’m a firm believer in modeling and working on good ideas, and I think Inquire Within is a good idea,” FitzGerald said. “It’s a logical step to work hand in hand with the libraries to make sure as many people as possible are getting that incredible PBS content.”

WQED provided WVPB with a toolkit and training to launch Inquire Within. Masciola said she aims to have Inquire Within in libraries all over the country.

“Every PBS station that has a library near it should be able to do this,” Masciola said. “Instead of recreating the wheel, we can give them the template.”