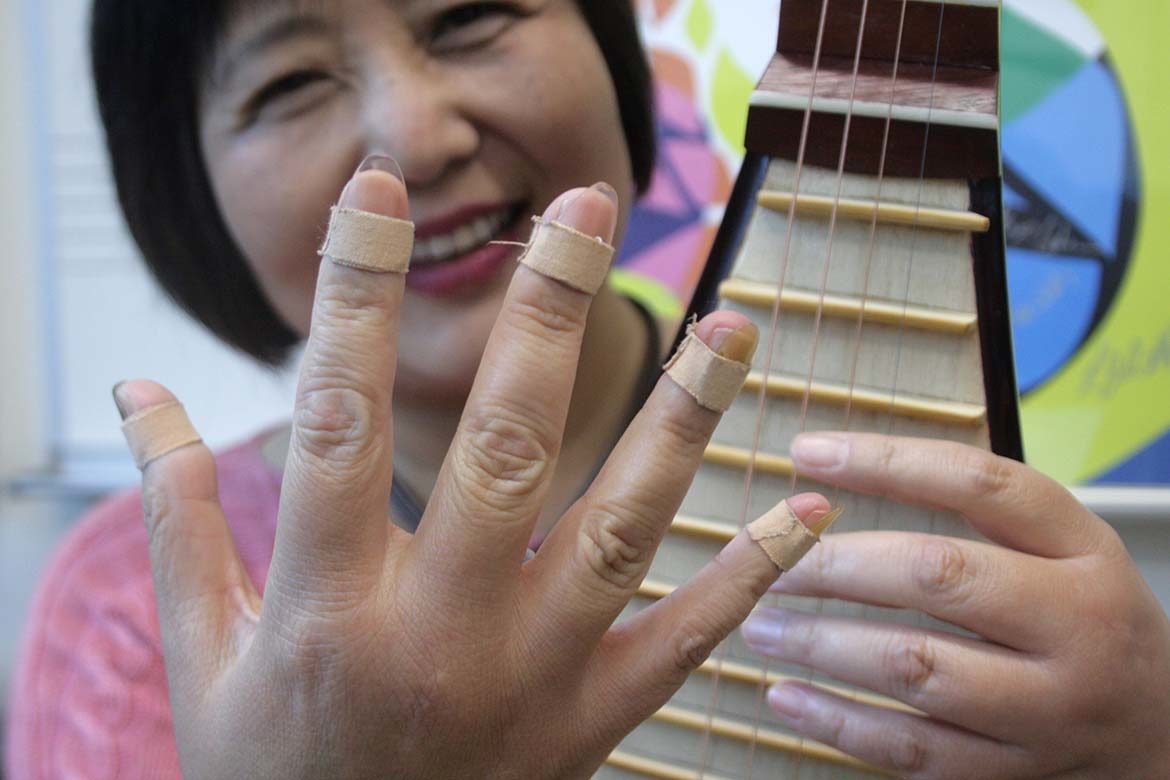 Musician Gao Hong was featured in a MinneCulture story after she performed at a Minnesota Timberwolves game.

Community radio stations in Minnesota have strengthened their arts and culture coverage through a unique state program that provides about $1.5 million annually to subsidize their programming.

The money comes from Minnesota’s Arts and Cultural Heritage Fund, which was created by a 2008 amendment to the state constitution that earmarked tax revenues to protect natural resources and preserve arts and cultural heritage. Public broadcasters and other cultural institutions — including Minnesota’s museums, zoos, aquariums and small theaters — receive annual grants to support arts, culture and history programs and projects.

“It’s like CPB money in that it’s a blessing and a curse,” said Joel Glaser, CEO of the Association of Minnesota Public Educational Radio Stations, which advises the state government on grants to the community radio stations that make up its membership. “It’s wonderful to get the money, but there’s a lot of reporting. I have to keep reminding them. ‘Stop complaining, you’re getting a hundred thousand dollars.’”

Glaser adds: “It really doesn’t help their bottom line. It helps their programming.”

A 3/8-cent tax hike is expected to funnel more than $1.2 billion into arts and cultural programs over the 25-year life of the tax.

Of the 18 AMPERS stations in Minnesota, four are affiliated with Native American communities, six are licensed to colleges and all but one receives programming grants from the Arts and Cultural Heritage Fund. This fiscal year the six public TV stations that make up the Minnesota Public Television Association split about $3.7 million from the fund, and MPR received about $1.6 million.

Perhaps no station has done as much with the funding distributed through AMPERS as KFAI, one of four AMPERS members in the Twin Cities area. KFAI has received an average of $98,000 a year since 2016.

The scrappy FM outlet’s mission is serving “people ignored or misrepresented by mainstream media … while fostering the values of democracy and social justice.” KFAI uses the state money to produce MinneCulture, a project that combines ongoing feature coverage of arts, culture and history with broadcasts of music performances by Minnesota artists.

“For a tiny community radio station competing against Minnesota Public Radio and other folks, we felt really good about winning six times,” said Todd Melby, managing editor of the MinneCulture Project and a longtime independent producer based in Minneapolis. The feature stories run up to five minutes in length and air as interstitials and within the weekly shows Minneculture Presents and Poetry, Science & Wrestling.

One recent MinneCulture story profiled musician Gao Hong, who plays the pipa, a Chinese lute. Another feature focused on Atlanta sculptor Tristan Al-Haddad’s collaboration with a group of women welders at a tech school in Minneapolis. “It gave the listener insight into how art gets made,” Melby said.

Independent producer Melissa Olson, host of the weekly KFAI public affairs show Indigeneity Rising, has reported a series of stories about Native people who were adopted into non-Native families. Olson included her mother in an hourlong documentary on the topic.

Being paid to produce for MinneCulture “means I can commit to these stories, while working part-time at another job,” said Olson. “Working with KFAI has given me access to recording equipment, studio time and experienced audio technicians.”

Last year, MinneCulture released a cassette mixtape of the live concerts it recorded for broadcast. It included performances by Dalmar Yare, a Somali musician; Charlie Parr, a Duluth folkie; and Chastity Brown, who’s been described as a banjo-playing soul-singer.

KOJB-FM, a north central Minnesota station serving one of several Ojibwe reservations in the state, gets about $90,000 a year in Arts and Cultural Heritage Funds, according to Brad Walhof, station manager. KOJB reaches about 10,000 members of the Leech Lake Band of Ojibwe and a potential non-Native audience of 18,000, he said. Grants from the support production of Living the Ojibwe Way of Life, Native American Plants and Medicines and Learning the Ojibwe Language, a five-minute program in which a former reservation language teacher presents a new Ojibwe phrase every week.

The listenership for these programs includes non-Native people, Walhof told Current. “The programs we produce with Arts and Cultural Heritage Fund money create a better understanding among our neighbors who get to learn a little bit about the culture of Native Americans.”

WTIP in the resort town of Grand Marais serves Cook County, the largest county in Minnesota with the smallest population. The AMPERS member station sits on the northern shore of Lake Superior, about 40 miles southwest of the Canadian border. In recent years it has become the primary media outlet for what is known as the Arrowhead Region of Minnesota, according to Matthew Brown, station manager.

Grants from the Arts and Cultural Heritage Fund supported a series of reports on sex trafficking on Lake Superior, which aired on WTIP’s Lake Superior Project, an ongoing series. Monies from the fund helped cover the costs of a reporter to travel to Duluth for the assignment. WTIP also commissioned the feature stories “Walking the Old Road” and “Of Woods and Words” from volunteers who did the reporting under freelance contracts and used WTIP’s equipment. The money also supported production of a program that was based on letters written during World War I by a local soldier named Albert Bally.

“We really try to be as local as we can be,” said Brown.

This has meant covering the county commission, the city council and local township boards as well as reporting on local weather in great detail, power outages and road closings.

Being hyperlocal is the niche many of the AMPERS stations have occupied, confirms Glaser.

“Minnesota Public Radio is like Target or Home Depot,” he said. “We’re the corner hardware store where everyone knows your name.”

AMPERS itself receives Arts and Cultural Heritage Funds to produce programs, including MN:90, a 90-second history segment carried by 17 of its stations, and Minnesota Music Notes.

For Minnesota’s next biennial budget, AMPERS has requested $1.7 million annually for its stations in fiscal 2020 and 2021. Glaser expects final decisions on the funding request in mid-May during the last few days of the legislative session.

Production on new projects to be supported by the funds, which are not specified until the grant is announced, start July 1, when the new biennium begins.

An earlier version of this article incorrectly reported that MPR received about $3.1 million from the Arts and Cultural Heritage Fund for fiscal 2019. The grant for this year was $1.6 million. It also inaccurately reported that AMPERS distributes state funds to its member stations. The association makes recommendations on station grants to the state Department of Administration, which makes final decisions on funding to individual stations.