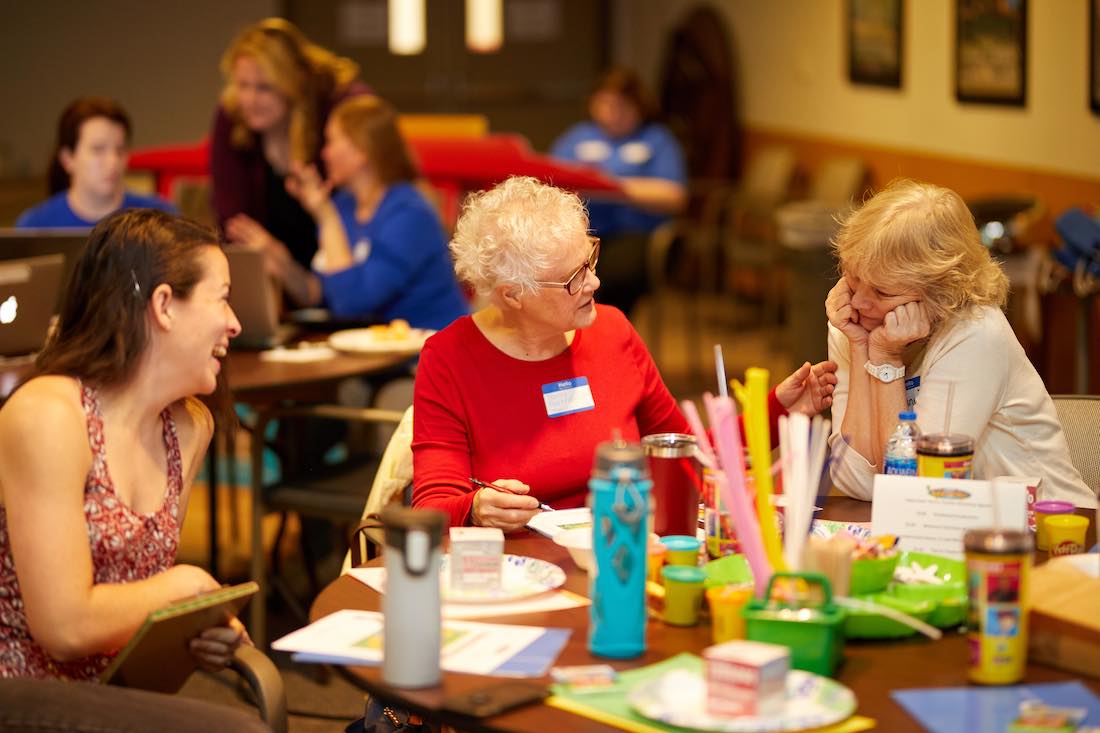 Teachers interact at a STEM workshop sponsored by NET Nebraska. Stations are tracking participation in such outreach activities to quantify public television’s work in education.

In a growing effort to quantify public television’s work in education, a group of stations has teamed up with the National Educational Telecommunications Association to develop a national database of performance metrics.

In addition to helping stations analyze the reach and effectiveness of their educational services, the work will help public broadcasters bolster their cases for public and private funding.

PBS is also collaborating with 12 stations to develop a unique dashboard to track local usage of educational content on the PBS Kids 24/7 channel and digital live stream.

“Education work is historically one thing that members of Congress respond positively to,” said Kate Riley, VP of government and public affairs at America’s Public Television Stations, during last month’s NETA’s conference in Salt Lake City. Those lawmakers “need to know about unique and impactful education work at stations,” she said.

That’s where the data-gathering initiative comes in. “Ultimately what we’re building is a national picture of the great work that public media is doing in education,” said Andrew MacCartney, VP of digital and education at Georgia Public Broadcasting. “We want to be able to quantify that.” GPB, a participant in the NETA initiative, has been at the forefront of efforts to track education metrics. It worked with Georgia Tech to develop a methodology that MacCartney presented at last year’s NETA conference.

Stations in the NETA working group started by defining a glossary of metrics terms that aims to get everyone speaking the same language and examining the same data. Another session at the NETA conference generated ideas for what specific metrics stations collect to track their education efforts.

“The first piece of this work is understanding what station data points are,” said Tim Eernisse, NETA education VP. “Everyone doesn’t collect the same information.”

“The second piece is to get stations to share how they’re collecting the data,” Eernisse said. “My gut tells me, some stations aren’t collecting anything.”

Eernisse said NETA will serve as the “convener and facilitator” for the work, with stations leading the effort. NETA will host a webinar for stations March 28 to kick off its participation.

The effort is similar to an initiative to create shared metrics for tracking digital performance. A working group of stations and national organizations, including NPR, PBS and PRX, defined a set of key performance indicators for measuring digital audiences.

Public TV leaders began talking up different approaches for tracking education metrics at last year’s NETA conference. Vegas PBS had been working with David and Judith LeRoy of TRAC Media Services to devise its methodology. “We’re just beginning to do counting in education that is consistent across the system, and we don’t have a common yardstick,” GM Tom Axtell said.

Since then, a group of stations including GPB, Kentucky Educational Television, NET Nebraska, Alabama Public Television and KUED in Salt Lake City began collaborating to advance that work.

NET Nebraska contributed a six-page “Glossary of Domain User & Content Centric Metrics.” It not only defines phrases (“Session Duration: Total duration in seconds of users’ sessions”) but also reminds stations what education data they should be tracking. The document suggests tracking Google Analytics and interactions in YouTube channels, Facebook, PBS LearningMedia and newsletters.

“Maybe one station is counting impressions, maybe another is counting views or users,” said Debbie Hamlett, assistant GM of development and marketing, who worked on the glossary with Collin K. Berke, NET’s media research analyst. “We aren’t all saying or measuring the same things,” she said.

At NET staffers “have started counting everything” to do with its educational work, Hamlett said. “We already counted how many teachers we train, the kids at workshops, normal stuff.” But after they started tracking usage across various digital platforms, such as views of NET education videos on YouTube and pageviews of online educational content, staff found 24.5 million content encounters over the past year had been overlooked.

Hamlett led this year’s “Education Metrics with Meaning” presentation at the NETA conference with Tonya Crum, senior director of education at KET. Participants split into small working groups to answer questions such as: What education data do you capture? What systems do you use to track data? and What support do you need to make capturing data a reality?

Meanwhile, PBS received a $5.6 million grant from CPB to give member stations more granular information about use of the PBS Kids channel and its digital stream on apps and over-the-top devices. The funding is part of a four-year grant announced in October 2017 to help create interactive games and track their educational impact.

“PBS has been working closely with NETA on a variety of educational efforts, including metrics,” said PBS spokesperson Maria Vera Whelan.

Whelan said that by fall, PBS hopes to launch an interactive dashboard to allow stations to pull PBS Kids usage data for their local market. The dashboard will track data such as the number of users on digital platforms, how much time they’re spending and which specific games or activities they’re using.