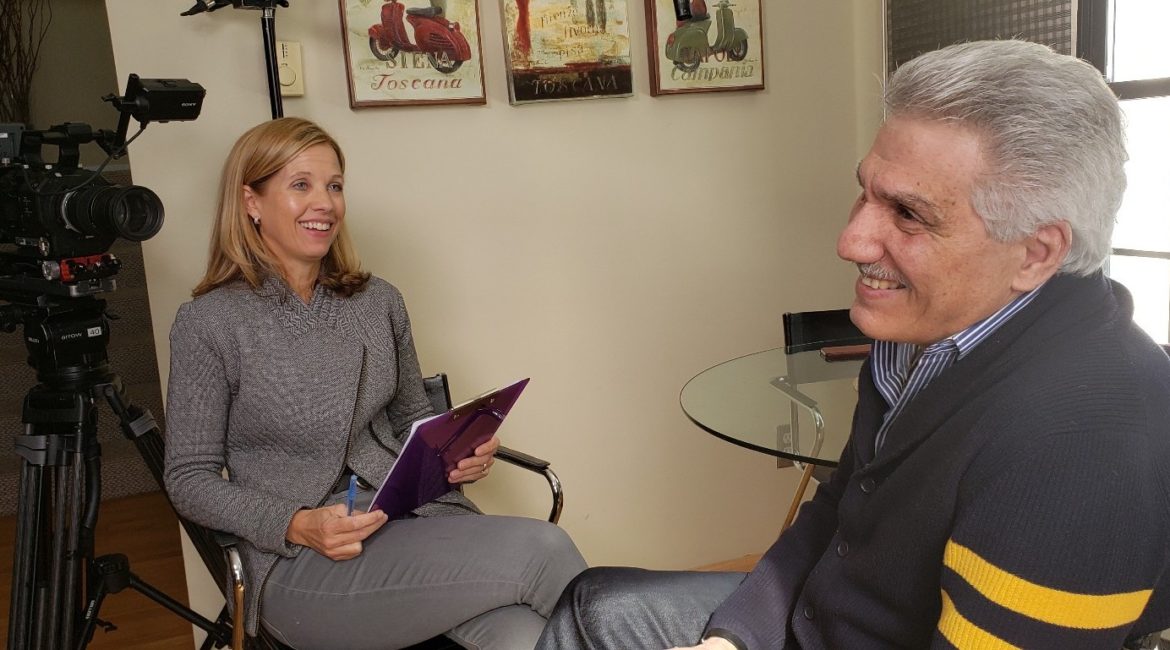 Connecticut Public has launched a season of 10 digital-first short films showcasing personal stories of immigrants who settled in the state.

The three-minute videos are posted weekly on Facebook, YouTube and the website of CPTV, Connecticut Public’s TV station; they also air as interstitials during program breaks. The 10 installments of Home Movies: American Journeys follow weekly broadcasts of PBS’ Finding Your Roots with Henry Louis Gates, Jr. The shorts air at 8:57 p.m. every Tuesday through the end of March.

“We want to celebrate diversity in Connecticut and the vibrancy of life here,” said Elizabeth Messina, VP of media innovation for Connecticut Public. “Part of Connecticut is that people come here from all over the world.”

American Journeys is the first Sharing Connecticut series to experiment with engagement, inviting viewers to submit their stories through the show’s website or share them on social media with the hashtag #ctamerican.

Messina developed the idea for the series a year ago with John Holt, one of two independent producers working on American Journeys. For each video, the subjects tell their stories directly to the camera with no voiceover or host on-screen.

The series isn’t meant to be political, said Messina and Heather Dawson, EP of the Sharing Connecticut initiative.

“Just by sharing these very human, very local stories without any divisiveness, we all think it’s powerful and important,” Dawson said.

American Journeys includes stories of immigrants who arrived decades or just a few years ago. Lucian Pawlak, a former mayor of Bridgeport, immigrated from Eastern Europe with his family after World War II. Daniel Trust came to America after surviving the Rwandan genocide of 1994. He’s now the founder and CEO of a foundation that helps low-income students attend college.

“For the first 15 years of my life, I lived in chaos,” Trust says on camera. He is loyal to Bridgeport, the city where he landed, because that is where he “found family” and “discovered who I was.”

One video gets into the immigration policies of President Trump. Mohamad Chaghlil, a refugee of the Syrian civil war, arrived in Connecticut in 2016 and had to leave his mother behind in Jordan. Chaghlil tells how Trump’s anti-Muslim and hardline immigration rhetoric affected him, instilling fears about how he would be treated in America. “I realized Americans are way nicer than I thought,” he says in the video. Chaghlil criticizes the Trump administration’s policies to limit immigration, yet acknowledges he wouldn’t have such freedom to speak out if he was back at home in Syria.

The series aims to “put a human face on the story,” said Sara Connor, an independent producer working with Holt on the series. “To show all the ways that people end up here — and what their lives are like when they get here, being refugees. The personal can get lost in descriptions of people [as] a group.”

Holt said local organizations like the Connecticut Institute for Refugees and Immigrants in Bridgeport and Integrated Refugee & Immigrant Services in New Haven helped him find people to appear in the series.

Sharing Connecticut launched two years ago as a digital-first collection of videos that “help to localize our station,” said Messina. “We overlap with Massachusetts and New York in parts of the state, so we wanted our local to come through.”

“We were exploring a way we could make beautiful short-form content to premiere on social channels and web channels to reach a more diverse audience and build community. We are not a huge state. I feel like there is so much going on in the state that people aren’t aware of,” Dawson said.

Other series in the initiative have a lifestyle or cultural focus: Amplify features local musicians; This Life Calls to Me explores Connecticut farms; and On Tap visits local breweries. In How to Play, Connecticut athletes talk to kids about how playing sports builds character. These series have each had two, six-episode seasons.

Each Sharing Connecticut series is released on digital platforms — CPTV’s website and social media channels — and as interstitials on primetime weeknight television, said Messina. They usually debut on Tuesday or Thursday nights and go into rotation during program breaks on Connecticut Public’s two TV channels, CPTV and CPTV Spirit.

American Journeys “digs a little deeper” than the lifestyle focus of the other series, Dawson said. It also has a bigger footprint: American Journeys was designed to run over 10 weeks as a companion to Finding Your Roots. “So far, anecdotally, we’ve gotten very nice feedback. People like the message.”

For this show, producers added an engagement component. Viewers can upload photos, video and audio to the series website along with text of their immigration stories. Very few submissions have come in, Messina said. She hopes the responses will build over time.

“It’s hard. It’s not like we are asking, ‘Send a picture of your sneakers,’” Messina said. “We ask people to submit a personal story. They have to … take the time, and it’s a high bar for some,” she said. “We wanted to experiment and … try to do it. We are learning a lot.”

The major takeaway, Messina said, is the need for a staff person to manage community outreach. “We have to make space … for someone. We are working on it.” She envisions the job as defining best practices for communicating with viewers about the project, and working with other CPTV divisions on audience evaluation and promotion.

Digital production and distribution of Sharing Connecticut videos has opened “a whole other audience just outside our traditional broadcast audience,” Dawson said.

As the first season of American Journeys moves into its final weeks, Sharing Connecticut is preparing a new short-form series to debut next month. Women’s Work: Stories Behind the Movement commissioned to mark Women’s History Month, will also have an engagement feature, promoted on social media with the hashtag #RAISEHERUP. To spur submissions, Messina said, the pubcaster is coordinating with women’s organizations in the region and offering a gift incentive for participants. It has also called on some of its on-air radio talent to contribute their own stories.

The project highlights Connecticut women — artists, educators, advocates, entrepreneurs — who use their voices and skills to inspire others and make change. Women’s Work is the first Sharing Connecticut series to debut with a half-hour broadcast. The documentary featuring six women premieres on CPTV March 21. A series of short films, where “we get to know the subjects of the series more deeply,” Messina said, will follow with weekly releases.