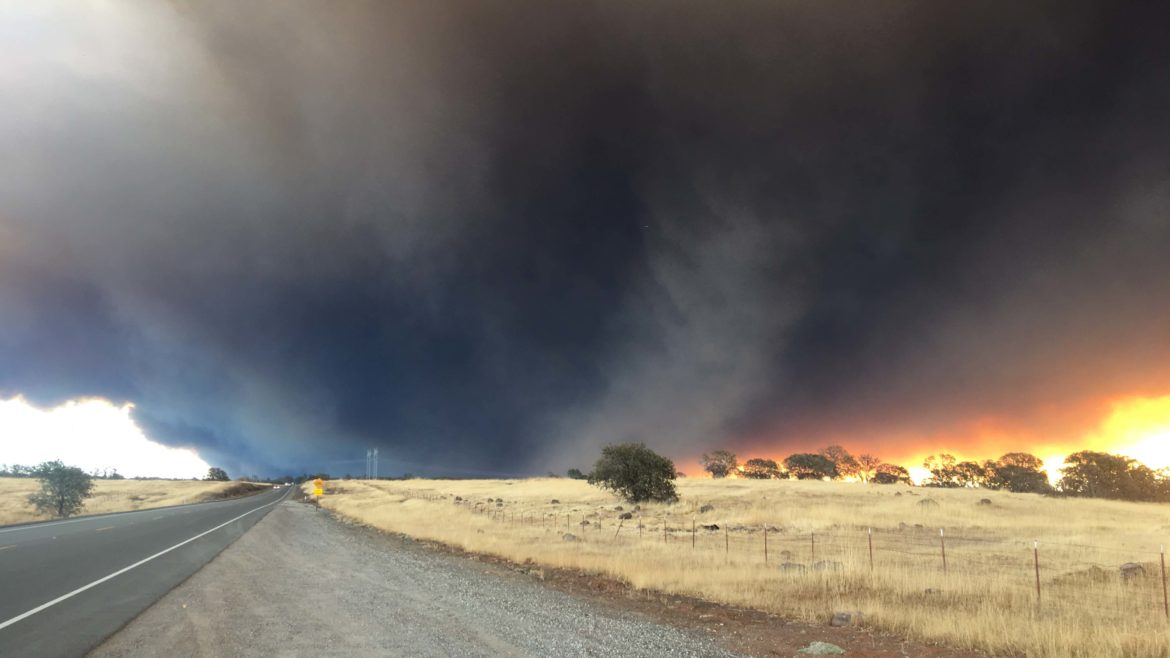 The skyline east of Chico, Calif., shortly after the Camp Fire erupted in Butte County Nov. 8.

Every day’s broadcast — that mix of local news and music and nationally syndicated shows — is a team effort. Sometimes, though, you don’t know how big or how generous your team is.

On the morning of Nov. 8, a wind-fed brush fire started in the Jarbo Gap east of Chico, Calif., and pushed miles west and south, consuming everything in its path. Cities were evacuated, with varying degrees of difficulty and success, and the almost the entire town of Paradise burned to the ground. As I left a speaking engagement that morning, I could see the fire speed across the horizon towards Paradise, the second-most populated city in Butte County.

Most of the area to the east and south of Chico would be burned or evacuated before the fire was eventually contained at 153,000 acres. Tens of thousands of people within our service area would be displaced. Eighty-five residents, most of them over age 60, lost their lives. One month since the Camp Fire set off, the list of missing people, which had been as high as 1,300, is down to 11.

Based at Chico State University, North State Public Radio delivers news and music programming to communities across 13 counties in Northern California. Our newsroom has two reporters — one of whom also pulls a Morning Edition board-operator shift. To say we were understaffed to handle breaking news of a natural disaster of this size and severity would be a profound understatement.

Within 30 minutes of the fire’s outbreak, News Director Sarah Bohannon and Reporter Marc Albert began cutting into ME, announcing evacuation orders and reporting news they gathered from phone calls and verified sources — broadcasting critical public safety information. They produced top- and bottom-of-the-hour news updates throughout the day, breaking in when critical information was available. This continuing coverage went on for weeks, but we didn’t have the staff to do field reporting while also keeping listeners safe.

Because our small news team was so focused on reporting public safety information, I didn’t have many options for freeing our staffers from desk reporting.

Fortunately, our listeners heard great reporting from public radio outlets with far more resources. Capital Public Radio in Sacramento and KQED from San Francisco were covering breaking news and survivor stories. Within a day, NPR had multiple reporters on the ground. Producers from KQED’s California Report and NPR’s Morning Edition wanted to use our studio, and we were stretched beyond capacity to host both of them.

We needed all the help we could get, and I was searching for ways to produce original content for our air.

We started by assigning our student intern Andrew Baumgartner to monitor every social media feed we could think of — first responders, sheriff’s department, Cal Fire, other media outlets and hashtags like #CampFire — to gather emergency information and news that could be added to hourly updates. Andrew worked on the campus newspaper, so I asked him to call his friends. Four students volunteered to help. I used Photoshop to create makeshift NSPR media credentials, told them to stay safe and dispatched them to evacuation shelters, official briefings and other places where they could safely observe the chaos. For the next few days, they contributed photos and tweets. 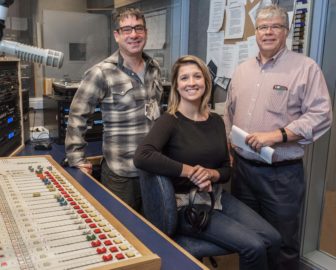 Because our small news team was so focused on reporting public safety information, I didn’t have many options for freeing our staffers from desk reporting. I had already pressed our part-time board ops into full-time news gathering and reporting responsibilities.

One of the great benefits of networking is that you never know who you’re going to hear from or when. On Nov. 18, eight days after the fire began, the regional director of the Society of Professional Journalists contacted NSPR’s Marc Albert. Deb Krol, a freelance journalist and director of SPJ’s Region 11 chapters, offered to put out a call for volunteers to work in our newsroom. I wasn’t smart enough to think of this idea initially, but I wasn’t dumb enough to turn down the offer either.

Within hours of her call and its circulation via SPJ’s e-newsletter and social media channels, I began hearing from every variety of journalist — producers, both audio and visual; editors; photographers; and those working for media outlets across the country. People from Hawaii and New York offered to fly here on their own dime. Others offered to work remotely on story assignments or to edit scripts and audio. In all, nearly three dozen people contacted me. Thankfully, one of them was a veteran public radio journalist and host was planning to drive from Los Angeles to Portland, Ore., who offered to stop by and help. That’s how we met Tess Vigeland. Tess became the driving force behind our coverage and After Paradise, the special series we launched as a daily Nov. 26.

For our first planning session, Tess came outfitted with reams of story ideas, contact lists of sources and experts and knowledge of how to build a show around the NPR clock. Tess gave NSPR’s staff, volunteer reporters and station partners a masterclass in how to create and produce a daily show with few resources. She also put a determined focus on how the show could best benefit the community and help the Camp Fire survivors. With her guidance, within 72 hours we went on the air Nov. 26 with a 30-minute show of original content.

Tess’s unexpectedly generous offer of time and talent changed my role from GM to logistics manager. I needed to find lodging for the volunteers we could arrange to bring to Chico. I would have been happy to cover their hotel bills, but Chico was now housing tens of thousands of evacuees, emergency response crews, firefighting personnel and journalists from out-of-state or around the world. The closest hotel with vacancies was in another county, often 30 to 45 minutes away.

The experience of covering the Camp Fire has prepared us to respond to the next emergency. We know how to deploy reporters, board ops, volunteers and interns.

We turned inward. NSPR’s part-time receptionist had a spare room and put up a reporter from KPFA in Berkeley; later a producer from a San Francisco business news network stayed with her. My boss hosted reporters in his home and put me in touch with a woman who arranges accommodations in local homes for symphony performers who travel to campus. Two symphony supporters who I’ve never met opened their homes to an audio producer from LA and a reporter from San Francisco.

This Friday, After Paradise will end its run as a daily show, but we’ll begin airing weekly episodes Dec. 20. We’re still looking to enlist generous volunteer journalists as often as possible — as long as I can find housing for them.

I don’t know how long the show will run. The community’s need for this information is profound and ongoing. Managing time, personnel, volunteers, resources and expectations of what we can deliver will be both a short- and long-term problem.

I really hate to say this, but the experience of covering the Camp Fire has prepared us to respond to the next emergency. We know how to deploy reporters, board ops, volunteers and interns. We have a playbook — though it’s one you don’t want to use because it means your listeners and your community are in trouble.

Looking back, here’s what I might have done differently:

The Beatles were right, of course: You will get by with a little help from your friends.

When your public media colleagues ask for help, please lend it if you can. They wouldn’t be asking unless they were already completely overwhelmed.

Phil Wilke had been GM at NSPR less than three months before the Camp Fire broke out Nov. 8. He came to Chico from KRWG Public Media in Las Cruces, N.M., where he was development director. Before that, he was media manager at Kansas Public Radio in Lawrence and a newspaper editor, reporter and columnist in Lawrence and Topeka, Kan.