Boston’s WGBH is evaluating the success of its educational resources about space science as it prepares to release two more collections of classroom content in the summer of 2019.

The yearlong evaluation is part of a five-year, $10 million collaborative agreement between NASA and WGBH, which began in 2015 to develop innovative ways to visually communicate complicated scientific ideas to students. The free resources are being used in 200 classrooms across the country.

WGBH will study how educators in kindergarten through 12th-grade classrooms have integrated over 50 space activities from the “Bringing the Universe to America’s Classrooms” collection into their curricula. In the remaining two years of the program, WGBH plans to use feedback from the evaluation to improve future projects.

WGBH released the visual space resources in August to the 1.6 million teachers registered on the PBS LearningMedia website and introduced the content through a series of three webinars watched by nearly 2,000 teachers across the country.

The newest resources explore solar phenomena through short activities, videos and lesson plans that feature storylines from PBS shows, including Nova, The Ruff Ruffman Show and Peep and the Big Wide World.

Teachers are integral to the program’s design, according to Connolly. WGBH worked with 50 teachers from around the country during the project’s first year to develop support materials that met Next Generation Science Standards, a set of content standards developed by states. Lesson plans, discussion questions, teaching tips and background readings are designed to help students build a scientifically based understanding of the world.

“We did a lot of testing with teacher advisors to understand how they are using media and what kinds of media they prefer across different grade levels,” Connolly said. 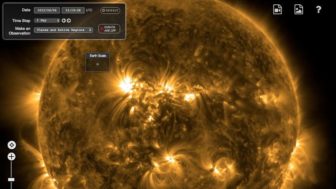 The helioviewer data tool allows students to study satellite images of the sun.

The resources are accessible for English-language learners and students with disabilities. Hearing-impaired students can view videos with closed captions, and blind students can visualize content with assistance from screen readers and descriptive video narration. Lesson plans encourage English-language learners to describe patterns using words from both English and their native language.

The digital storybook “Peep Sees Patterns in the Sky,” for elementary students, tells the story of three friends exploring their everyday surroundings. It prompts students to examine the universe around them with questions about Peep’s adventures. An attached activity asks students to record the moon’s positions and predict future appearances.

“Tour of the Universe” takes high-schoolers on a video journey through the Milky Way, with support materials asking them to “craft an argument about how feasible or not feasible it would be to travel to another star system within the Milky Way.”

WGBH collected resources from PBS stations and NASA scientists. Along with funding the project, NASA also created resources, including a helioviewer data tool for high-schoolers, which allows students to access satellite data and create videos of solar activity. WGBH animators built activities for the project, including a Ruff Ruffman game, “The Sun, The Sky and a Whole Lot of Pie.”

WGBH plans to release a set of resources celebrating the 50th anniversary of the moon landing in early summer 2019 and a set of astrophysics and light resources before the start of the 2019 school year.