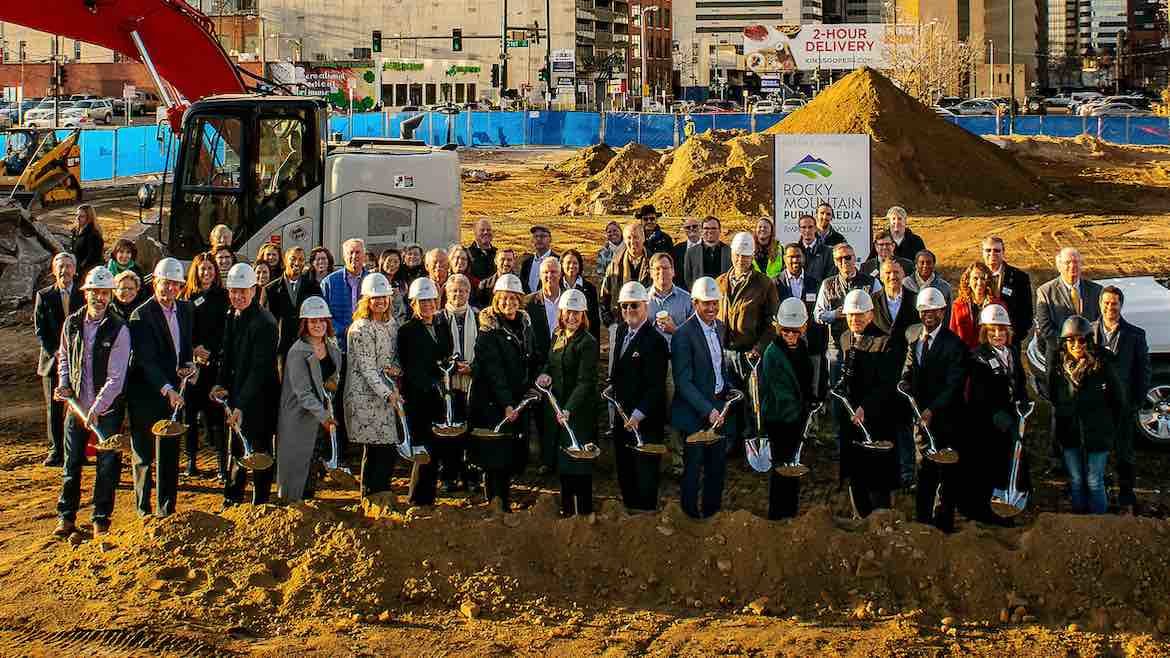 Rocky Mountain Public Media broke ground on its new Denver headquarters Nov. 29, the result of a “creative financing strategies” capital campaign that the station hopes will create a gathering spot for Colorado journalists and the public.

With the campaign goal originally set for $30 million, a lucrative funding period allowed RMPM to raise the goal to $34 million, with the additional money paying for a parking structure. With about $2.5 million left to raise, RMPM President Amanda Mountain said she expects the station to hit the new goal by December 2019, with the HQ opening by March 2020.

“The future is incredibly bright for our organization,” Mountain said, pointing as well to a duPont-Columbia Award the station won two weeks after groundbreaking for an investigative report on guns and mental health.

To raise the money, RMPM turned to corporate sponsors and new donors rather than coordinate a big, public member campaign. More than half of the seven-figure donors for the capital campaign were new to the organization, Mountain said. In total, 58 percent of funding came from gifts and pledges, 27 percent from real estate transactions and another 15 percent from a combination of local tax credits and funding programs.

Because the station relies on regular member contributions for operating support, Mountain wanted to avoid “cannibalizing operating support to pay for a capital campaign,” she said. Though RMPM will likely mount a public-facing campaign as its funding deadline draws near, Mountain said it would be mostly to give members a chance to feel like they are participating in supporting the new building if they want to, rather than out of necessity.

The sudden need for a parking structure arose after RMPM decided to sell a plot of land adjacent to the building to a Chicago-based developer rather than leave it for surface parking. But the station will score some perks from the deal: Employees will have access to overflow parking and gym space in the new property, which will hold about 300 housing units.

Other funding avenues came courtesy of the station’s unusual plans for the building. The first floor will function as a “public library space” for members of the community to create public access TV, with the space purchased by the city and county and the media center managed by Emily Griffith Technical College. This allowed a portion of the money for the building to come out of a public fund earmarked for public access TV.

Mountain described the media center as “conceptualizing public media in a different way, so that it’s not so difficult to access sometimes. The architecture of media buildings is sometimes counterintuitive to what we’re trying to do: be more transparent, be more engaging.”

RMPM will also aim to increase engagement with another space-sharing initiative. The station plans to lease about 9,000 square feet of its offices to a collaborative group of nine journalism organizations with presences in the Denver area, with the aim of fostering co-working and collaboration among the groups.

The organizations include the Colorado Press Association and the journalist-owned news site Colorado Sun, as well as the Denver bureaus of national news outlets like The Associated Press and Chalkbeat.

“When you have people together in proximity who are talking about news and thinking about news, [it] can only be healthy for this news landscape and ultimately for readers in Colorado,” said Susan Greene, editor and publisher of The Colorado Independent, a member-supported news site.

The Colorado Independent is currently housed in the Denver Open Media Building, a similar but smaller collaborative office space. Speculation about the city’s plans for the space has created uncertainty about the organization’s tenancy, Greene said, so she welcomes the possibility of moving to RMPM’s space.

Though Greene said the Independent would view some of its new office mates as “competition,” she added, “We’re really not living in a time where it’s productive to not speak with your competition.” In addition to facilitating more workplace conversation around the news, she said, the groups could explore a joint benefits package and other employee perks.

Greene formerly worked for the city’s largest newspaper, the Denver Post, which has bled staffers over the past several years. In March, parent company Alden Global Capital laid off nearly a third of the paper’s remaining staff, leaving behind 66 journalists and prompting the publication of a full-page editorial begging the company to sell the paper.

“We don’t think any one organization can step up and fill that gap,” Mountain said of Colorado’s growing news vacancies. “We think that, because we’re public media and we’re a trusted entity, we’re the only organization that can bring together all these arguably disparate media organizations under one roof.”