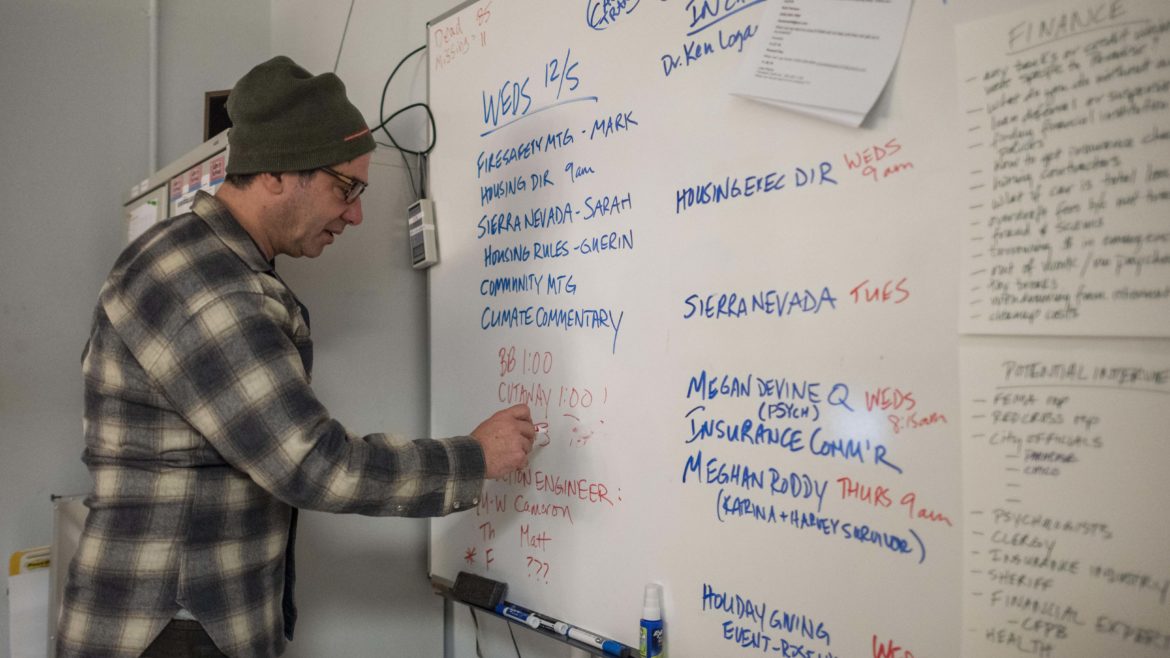 Reporter Marc Albert plans an episode of ‘After Paradise.’

I figured it was probably a fairly small station when I saw the note come across on Facebook.

I wasn’t sure how small, but I knew I had to raise my hand. I happened to be in the middle of a road trip from Portland, Ore., to Los Angeles, and back, so I had a car and I had clothes. I also had time; since returning in mid-August from a three-year sabbatical abroad, I hadn’t yet landed on the next career adventure.

Sometimes there’s this thing inside you that speaks in the loudest, clearest voice possible, with zero ambiguity, and you are compelled to listen to and act on it. I listened. And I acted. And they said, “Yes, come on up.”

As I walked into the NSPR newsroom late on the Friday afternoon after Thanksgiving, a soft rain was falling on Chico. The fire was 90 percent contained, the death toll was at 83 and more than 600 people were still listed as missing. I introduced myself to Phil Wilke (the GM) and Sarah Bohannon (the news director, who also serves as the local Morning Edition host) and we huddled almost immediately to talk about what the station needed to do. You could almost see the exhaustion in their bones.

I had suggested in an email that they think about putting together a daily show of special programming, and they had already been toying with that idea, but had neither the experience nor the resources to do it on their own. I said I’d spend a few hours putting together a couple of clocks for a half-hour and one-hour program, as well as suggestions for what the focus of the effort should be, and we’d recon Saturday morning.

Over the next 72 hours, we conceived and birthed what became a half-hour daily show — something that often takes stations weeks, if not months, to pull together.

Fourteen years hosting at ‘Marketplace’ and NPR didn’t prepare me for this. It felt like preparing to captain a plane for the first time and discovering my co-pilots are on their first flight ever.

We worked through the weekend, along with the station’s lone full-time reporter, Marc Albert, after deciding that this program would be dedicated solely to helping the community in its recovery efforts. This wasn’t about reporting for a wider audience. This was about being a primary source of information for survivors and everyone else directly or indirectly affected by the fires.

That decision also helped focus us editorially. We ignored developments that most shows would consider news, like when Cabinet officials Ryan Zinke and Sonny Perdue arrived in town. Their visit was irrelevant in so many ways to what was happening on the ground at that point. Covering it would have been a distraction from what people really needed to hear, which was advice and comfort. Our focus was and is on the practical and the useful — airing whatever might help the community cope.

On a technical note, I also noted that with such a small staff, a “pretty” production (i.e. highly produced with great sound, complex mixes with music and lots of different voices, etc.) was far less important than professional, accurate and helpful.

This was a textbook situation where the perfect would be the enemy of the good. And I had to remind myself of that when, on Sunday afternoon, 24 hours before the debut show, I asked Sarah what time the station’s production engineers would be in.

I’m pretty sure all the blood drained from my face at that point. I’d be host, producer, assignment editor, and now … show engineer. Fourteen years hosting at Marketplace and NPR didn’t prepare me for this. It felt like preparing to captain a plane for the first time and discovering my co-pilots are on their first flight ever.

Other stations talked about carrying our program. We welcomed that and also encouraged them to take whatever elements they wanted from it. But we did not have the capacity to write rundowns, for example, watch for time references (in case stations wanted to air it at a different time) or anything else that normal shows would handle. We didn’t even have anyone here who knew how to upload to Content Depot. We just had to tell stations that this was how it was, and that as much as we wanted more people to hear it, we had to make the show for the local audience.

As we started pulling the show together, I thought about all the elements that go into a new program, and wondered how many of those things we should bother with. A name? An audio logo/billboard theme? Cutaways? Credits? Music? Then I realized how absurd it is that there is no template for creating all of those elements within the public radio system. With all the disasters that befall our communities year in and year out — hurricanes, tornados, earthquakes, mass shootings, and on and on — how is there no guidebook for how to quickly put together special programming? This is something we must work to fix.

Here’s a quick look at how we dealt with some of those elemental issues of show programming.

Naming the show: Phil, Marc, Sarah and I started a list on the side of a whiteboard where we were designing the show. Sarah and Marc quickly noted that anything playing on “Paradise, Lost” would prompt eye rolling throughout the community. So the list sat there for a few hours. Then, after I left the newsroom (such as it is, four desks in a room the size of a really nice bathroom), I walked back in to see three new entries on the board, including After Paradise.

“Who wrote that?!” I asked. “That’s it! That’s the one!” Props to Ken Devol, the station’s Weekend ATC host.

Show theme: I couldn’t imagine just starting a show without music. It’s in our DNA to have music at the top of a pubradio show. I don’t know all the ins-and-outs of music rights, and I didn’t have time to research it. So I emailed Adam Ragusea, who many of you will know as the host of Current’s former podcast The Pub; he is also an accomplished composer. I asked if he had anything he could give to us. Within two hours, he’d sent over several minute-long beds and told us to use however many of them we wanted, gratis. One became our billboard bed, and the others were used in breaks.

Music: We only used music from Adam, and a composer from Chico who also allowed it gratis.

Cutaways for sponsorship credits: Phil contacted NPR and learned we had to incorporate two minutes of national funding credits into the show, but it didn’t really matter where they were inserted within the half hour. So one became a floater, appearing at different times on different shows. The other we built in at the end of each show, so our running time was 29 minutes.

Credits (personnel): I decided to include these at the end of each program, mostly to thank those from outside our inner circle who were helping out.

With those elements decided, we had 29 minutes to play with each day. That’s a lot of time to fill for three people – me, Sarah and Marc. Thankfully, the local cavalry rode to the rescue: Both KQED in San Francisco and Capital Public Radio in Sacramento offered to help. KQED quickly became an indispensable partner that threw resources at us like baseballs in a batting cage. One of their hosts, John Sepulvado of The California Report, edited raw two-ways for the first show, and came into the station to mix the first two shows with software — and skills — that I did not have. (For the later shows, we put out a call for help and found two radio producers here in Chico (!) who graciously gave their time between 4 p.m. and 6 p.m. each day to mix the show.) 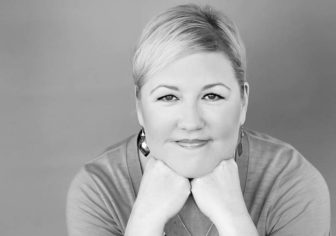 For the first two weeks of life for After Paradise as a daily show, KQED’s support made a world of difference for us. Members of their news team checked in pretty much every day to ask what we needed, and to offer reporters and pre-produced pieces. It saved me from the extra step of having to think about asking for help. They pushed help to us, and that’s something I would encourage other stations to do the next time a crisis like this crops up somewhere in the system.

There are so many other lessons to be learned from this effort. Someday I’ll sit down and think of all of them. What we’ve created in After Paradise is not just a show to be proud of, but a team of broadcasters who rose to the occasion at a time of intense need in the community. And that’s what we’re all here for.

Tess Vigeland was a host at Marketplace for 11 years and a backup host for Weekend All Things Considered. She’s also written for The New York Times, The Guardian and Forbes, and is the author of Leap, published by Penguin Random House.

One thought on “Creating ‘After Paradise,’ a public radio show for Northern California’s fire-ravaged communities”