WKSU in Kent will debut a pledge-free web stream during its fall fund drive Sept. 19–27. Sustaining members will be able to enjoy the station’s programming during the drive without being asked to support it financially. The stream will be available on WKSU’s website and through the station’s mobile app and an Alexa skill.

“Even people who say they don’t  mind the fund drive tell us that once they’ve donated, they wish they could skip the fundraising messages,” WKSU Executive Director Wendy Turner said in a press release. “That seems fair to me. It’s a bit of a technology hurdle but we are thrilled to offer this benefit to our active monthly donors.”

Pledge-free streams are not new to public radio or even to WKSU. The station’s new stream was inspired by a similar pledge-free stream for its Folk Alley web service, a spokesperson said. 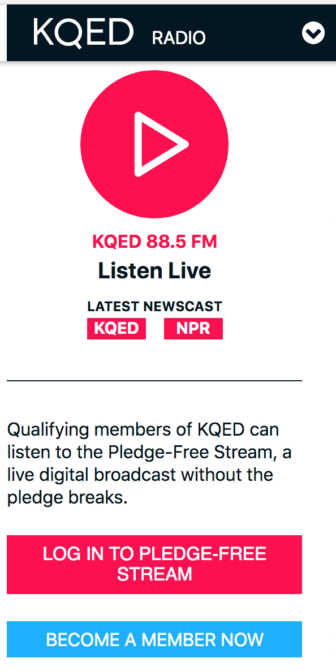 A screenshot of KQED’s pledge-free stream.

San Francisco’s KQED began offering a pledge-free stream in 2011 as a member benefit for sustainers. Several stations followed KQED’s lead, but the resources required caused some stations to drop them shortly afterwards, according to Melanie Coulson, executive director for member station services at Greater Public. Costs are low, but the streams require an announcer to record spots that cover the pledge breaks.

Station staffers considering investing in a pledge-free stream should ask whether the efforts would improve the drive, Coulson said. What will it require to pull off? What’s the desired outcome? Will it raise more money from new members, the people stations really need to reach during drives? “On air still is the main driver of new members for radio,” Coulson said.

Sustainers and long-time givers understand that stations have to hold drives to sustain themselves, Coulson said. On-air drives might even encourage sustainers to make additional donations.

“They know their end of the agreement, and they’re used to it,” Coulson said.

Some public broadcasters say they’re apprehensive about pledge drives, but the events are still key to stations’ business models, Coulson said. “They’re not going away anytime soon, so what can we do to make them as great as all the other programming we put out on the air?” she said.

But pledge-free streams do help remove a barrier for audience members who want to listen to the station’s programming and not the drive.

KQED does little to promote the benefit. Sustaining members learn about it mostly though emails and on-air promotion. The stream draws users in the low thousands during each drive.

“It’s for a relatively small but very loyal and important constituency of our sustaining members,” Olson said.