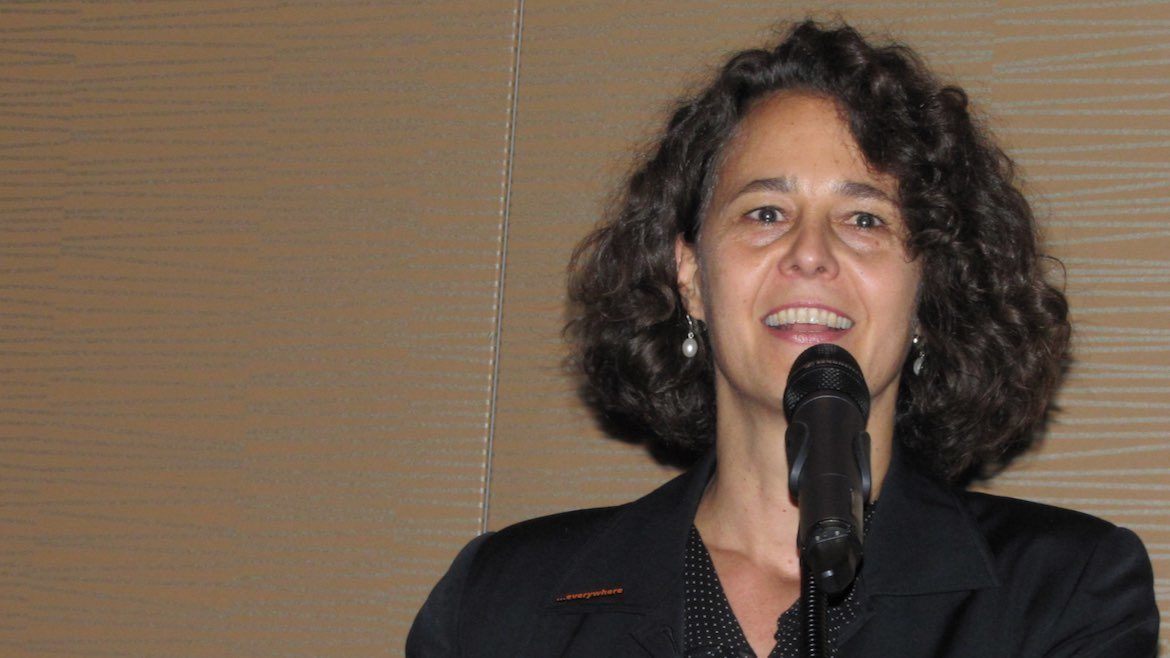 Schardt speaks at the Public Radio Program Directors conference in 2011.

Sue Schardt, former CEO of the Association of Independents in Radio, left the organization five weeks after the entire AIR staff sent a letter to the board requesting her immediate removal.

It was the second team of AIR staffers to write a letter of complaint to the AIR Board regarding Schardt within the last two years.

In the July 2 letter, obtained by Current, the staff characterized Schardt’s leadership as “a threat to the well-being of the organization and staff.” They said they “collectively decided to move forward in hopes of affecting necessary change at AIR” by approaching the board.

The 16-page letter included specific examples from each staffer that illustrated what they called:

“Sue’s leadership of AIR and treatment of staff directly contradicts the organization’s mission of supporting and creating conditions for independent producers to thrive,” the letter said. “We would not make this big step if we did not perceive this situation to be dire.”

In addition to asking for Schardt’s removal, the staff said that no new employees should be hired until the situation was rectified and rejected hiring a management consultant to work with Schardt.

AIR board members contacted by Current referred questions about Schardt’s departure to Board President Jennifer Ferro, who leads KCRW in Los Angeles.

“As is conventional, we as a board will not be commenting on HR matters as they are confidential,” Ferro said in an email.

“We on the board are excited for AIR’s future and finding the right leader to build on the incredible growth the organization has realized under Sue’s 11-year tenure,” Ferro said. “The work of independent producers is more vital than ever and we take seriously our role to promote and facilitate their work.”

Ferro added that Localore, AIR’s “signature project,” will continue under the next CEO. The initiative placed indie producers in stations to explore community issues.

The recent letter echoed one sent by the majority of AIR’s full-time staff two years earlier, when Schardt was executive director.

That email, obtained by Current, was sent July 1, 2016, to then–board President Neenah Ellis. It cited specific instances of problems with Schardt’s leadership including micromanaging, lack of sensitivity regarding race and gender, low staff morale and the lack of an employee to handle human resources. AIR’s employee manual from 2016, obtained by Current, directed staffers to file HR grievances with “the Executive Director and board directors.”

According to board minutes, Ellis said at an August 2016 meeting that Schardt, staffers and the board’s HR and executive committees “have been engaged … regarding communication issues on the AIR staff.”

The minutes said that directors contracted with a nonprofit consultant to provide assistance including management training. Joan Garry had previously worked with other public media organizations, the minutes said.

Garry told Current she was referred to AIR by one of the organization’s lead funders, the Ford Foundation. “There had been serious attrition problems, and I was engaged to assess the organizational dynamics, structure and management of AIR,” she said. According to LinkedIn profiles, four staffers had resigned from AIR since 2014 when Garry was brought in.

Garry said that after her work she shared her report and recommendations with Schardt and the board. She said she also presented an assessment and recommendations to the board in person in executive session at a meeting in November 2016. A confidentiality clause in her contract prevents Garry from discussing details.

That month, the board reiterated its support for Schardt while acknowledging problems. In a November 2016 document, the board said it wanted “to acknowledge its own role in creating new policies, procedures and processes to ensure that the work environment at AIR allows all employees to do their best work and feel supported.”

The statement recommended a new staff structure with a COO, a new position, running daily operations and overseeing HR.

Somerfield declined to comment for this article and said he was not authorized by the board to speak to the press. His signature is the first on the recent letter.

The AIR Board announced Tuesday that Tom Livingston of Livingston Associates will serve as interim CEO, effective Oct. 1.