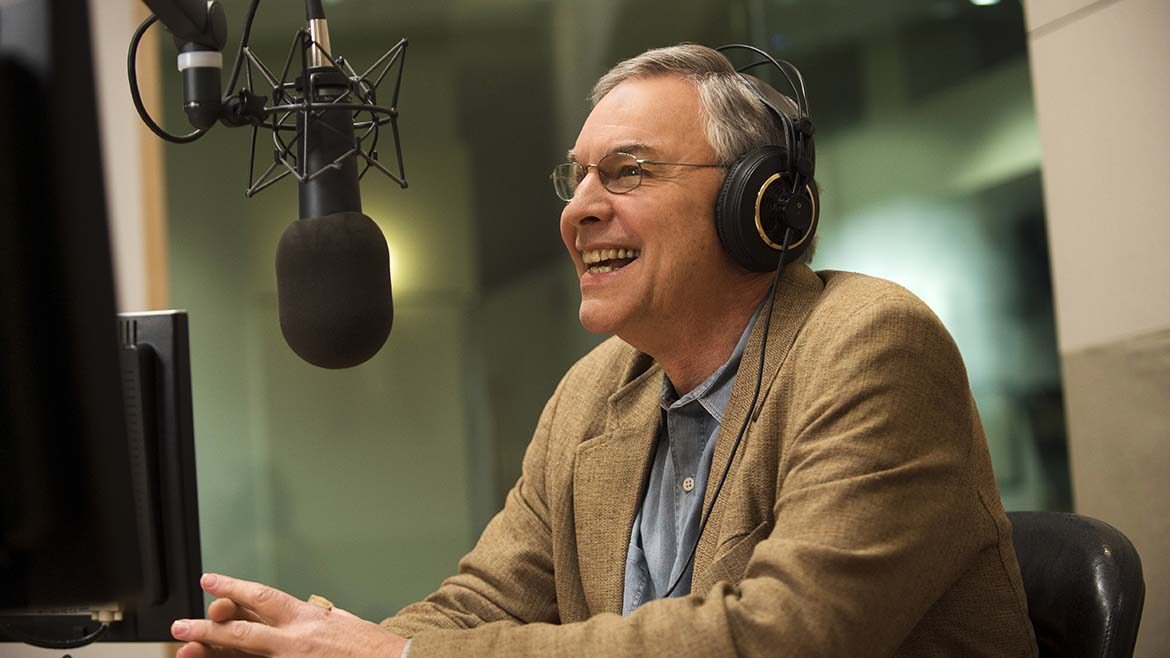 Littlefield, behind the mic at WBUR, delivers his final show Saturday.

As longtime listeners of Only A Game are well aware, host Bill Littlefield has never hesitated to speak out about talented athletes who engaged in criminal behavior.

But few of the show’s listeners know that it was a lawyer for two of the most famous athletes to be convicted in modern times who was indirectly responsible for Littlefield’s entree to WBUR. The station is marking a milestone as he hosts his final episode of Only A Game this weekend.

In 1984 the Boston station aired a couple of sports commentaries by Alan Dershowitz, who helped defend Mike Tyson and O.J. Simpson, among other celebrity clients. Littlefield complained to Carol Rissman, then the station’s news director, about the Harvard law professor’s segments. Rissman asked Littlefield if he thought he could do any better. He said that he could.

Thus began Littlefield’s 30-plus-year presence on Boston’s airwaves, starting as a local commentator on Morning Edition. A half-hour local version of Only A Game debuted in 1993 with Littlefield as host. The show expanded to an hour when it went national in 1994. 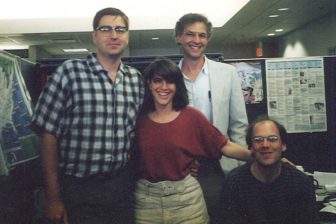 The show team in 1993, when Only A Game launched as a local broadcast, included Gary Waleik, Jennifer Loeb, Littlefield and David Greene.

It was picked up by fewer than 100 stations that first year, according to David Greene, the show’s founding senior producer, who recalled the story of Littlefield’s start as a commentator. Carriage grew to 200 stations by 1997, the year that Greene departed; today 255 stations air the show.

WBUR will continue producing Only A Game with a new host, but the search for Littlefield’s successor is still underway, according to a spokesperson.

“I feel gratitude for all the people who kept listening and made it possible for us to do the work that we feel is important to do,” Littlefield said. “We’ve managed to cover stories that have been neglected or not covered enough by other people.” Only A Game made a point of reporting on women’s sports and was ahead of the pack in covering the football concussion story.

Littlefield, 70, has juggled his radio-hosting duties with a career of teaching college and writing books. He has completed seven, edited several others and has an idea for his next novel.

Ask the lanky, literate host what his fondest moments on the radio have been and he’ll cite his visit to the great sportswriter W.C. Heinz in Vermont, a parody of the Ken Burns baseball documentaries that focused on candlepin bowling and a series on the Roxbury Community College men’s basketball team. Littlefield produced eight pieces by regularly attending the team’s practices, games, classes and an end-of-season banquet.

“They were a team at a level that nobody pays attention to. But they were great young men, many of whom were the first person in their family ever to attend college,” said Littlefield.

“Only A Game dealt with many amateur athletes who were not in the spotlight, and Bill could really get to the human part of their stories,” said Doug Tribou, an associate producer on the show from 2008 to 2015 who now hosts Morning Edition for Michigan Radio. “He also had a real knack for talking to kids and teenagers.”

In the mid-1990s Littlefield was field recording a piece about SquashBusters, a program that teaches inner city kids how to handle a racquet and prepares them to succeed in college. He interviewed a 10-year-old girl named Natalie at one of Boston’s deluxe squash courts and asked why she liked SquashBusters. The child responded, “Because it gives low-class people like me the opportunity to play squash and be a better student.”

Only A Game producer Gary Waleik, who was recording the exchange, recalled, “Without missing a beat, Bill said, ‘Well, Natalie, I’ve only known you for a minute or two, but I can already tell that there’s nothing low-class about you.’ That story shows you who Bill Littlefield is.”

“Bill understands that, although he’s the outward-facing voice of the show, it takes a whole lot of people and a whole lot of hands to make it.” – Karen Given, senior producer

Waleik was a production engineer at WBUR in 1985 and mixed Littlefield’s commentaries for Morning Edition. When the show launched, he became Only A Game‘s associate producer. He, Littlefield and Greene initially shared two desks in a WBUR cubicle.

A member of the successful Boston rock band Big Dipper, it is Waleik who is responsible for one of the show’s most enduring features: Super Bowl Haiku.

As Waleik, Littlefield and Greene discussed ways of covering the NFL’s big game without relying on the usual football analysts, out of the blue Waleik uttered “Super Bowl Haiku.”

“Bill started cackling,” Waleik recalled. “Then he immediately started writing a few, and they were fantastic.” Waleik became senior producer in 1997 and served in that capacity until 2017; he’s now a producer.

Every year the show gets hundreds of haikus submitted from listeners via email, voicemail and Twitter. WBUR staffers, including many who never sit in front of a mic, get to calmly recite the 17-syllable poems about the least serene sporting event.

Although past and present Only A Game staffers recalled having to subdue Littlefield’s impulse to do too many soccer stories, they all said he was a pleasure to work with. Gabe O’Connor, associate producer from 2000–2008 and now a production assistant on NPR’s All Things Considered, told Current, “He was your friend; he wasn’t your boss. You went out and you did the story together with him. He had great insights, and he allowed you to have great insights.”

Karen Given succeeded Waleik as senior producer in 2017. She  joined Only A Game in 1996 as technical director and recalls the staff as “the group of people at ’BUR who were having the most fun, and were the most excited to come to work every week.”

Given worked to widen the program’s definition of what constitutes sports, which has led to segments on belt sander races, skillet tossing and pumpkin chucking. She praises Littlefield for devoting so much airtime to women’s sports and women sports journalists.

“From the very beginning it was very important to Bill to get women’s voices out there,” Given said. “He’s always been a person who understands that what he is able to do is because he’s got people around him who are helping him. I think that can be a rare thing in this business.”

“Bill understands that, although he’s the outward-facing voice of the show, it takes a whole lot of people and a whole lot of hands to make it,” she added.

Given and other colleagues also appreciate Littlefield’s ability to write quickly and write well. Greene recalled a commentary that Littlefield wrote in 1991, right after basketball player Magic Johnson announced he was HIV positive.

“He has a gifted novelist’s view of sports and life.” — Scott Simon, NPR

“It just stopped me, and it almost brought tears to my eyes because it was so well-written and so perfect for the moment,” said Greene. “And that was something that Bill was always able to do. He was able to capture a moment.”

Weekend Edition Saturday host Scott Simon, who emceed Only A Game’s 20th anniversary celebration at a theater in Somerville, Mass., said he, too, admires Littlefield as a writer.

“He has a gifted novelist’s view of sports and life,” said Simon. “He sees potentials, he sees uncertainties and I think he appreciates how sports live in our hearts. I think that’s always distinguished him.”

“I certainly hope that stepping down as host only increases his literary output, because I think he has some important things to say,” Simon added.

Littlefield does have a book on the horizon — an idea for a novel about an old coach “looking back on glorious and horrifying events,” he said.

He also plans to tutor incarcerated youth and volunteer with a Boston group called More Than Words. The nonprofit collects and sells used books, and in the process teaches at-risk youth how to run a business.

“After you do what I’ve been doing for this length of time, you meet all kinds of people who are doing all kinds of interesting things,” Littlefield said. “Sometimes I’ve found myself saying, ‘Gee, I wouldn’t mind getting involved with those folks.’”

And now he can.

3 thoughts on “Bill Littlefield, host who took ‘Only A Game’ far beyond the field, prepares to sign off”